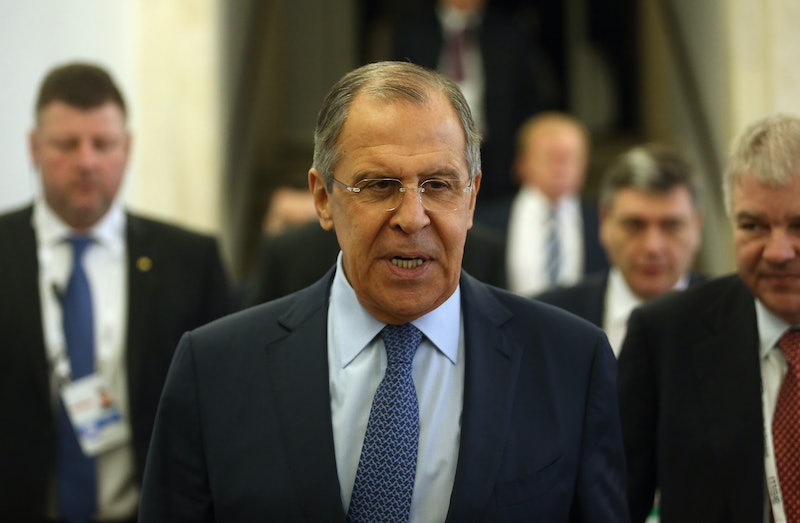 Monday was not a quiet day for the Trump administration. On Monday, The Washington Post reported that Trump had shared classified info during a Russia meeting with the country's diplomats on May 10. Though the president is allowed by law to disclose whatever he deems appropriate, the details reportedly disclosed at this meeting have raised serious concerns about who may now have access to U.S. intel on ISIS.

The information in question was revealed to Russian Foreign Minister Sergei Lavrov and Russian Ambassador to the United States Sergey Kislyak. White House officials involved in the meeting have downplayed the claims made to The Post by anonymous current and former U.S. officials.

"During President Trump's meeting with Foreign Minister Lavrov a broad range of subjects were discussed among which were common efforts and threats regarding counter-terrorism," Secretary of State Rex Tillerson said. "During that exchange the nature of specific threats were discussed, but they did not discuss sources, methods, or military operations."

Later on Monday, National Security Advisor H.R. McMaster vaguely denied the report, but did not say which parts of the reports he believed were false. "I was in the room and it didn't happen," he said in a statement to reporters.

According to The Post's report, which Buzzfeed has confirmed, Trump and the Russian officials spoke about an ISIS terror threat involving laptops on airplanes as well as efforts being made to combat such threats. During the meeting, Trump allegedly put a source of intel on ISIS in danger by disclosing too much info.

One of The Post's sources alleged that Trump "revealed more information to the Russian ambassador than we have shared with our own allies." In particular, Russian Ambassador Kislyak has been the source of immense controversy throughout Trump's short presidency. And to be clear, U.S. officials meeting with the Russian ambassador to the United States isn't a problem in itself — in fact, it's to be expected. However, meetings with Kislyak prior to Trump's election caused former National Security Adviser Michael Flynn to resign and Attorney General Jeff Sessions to recuse himself from the investigation into alleged ties between Russia and Trump's campaign. Trump has denied Russia collusion allegations on multiple occasions.

The possibility that Trump could have betrayed the whereabouts of a U.S. intelligence partner (though the White House denies he did) to Russian officials is a testament to the nation's concern that the president may act recklessly with important information. And the fact that Trump fired former FBI Director James Comey, who was in charge of investigating alleged ties between Trump's campaign and Russia, days earlier doesn't make things look any better.

More like this
How To Fight For Reproductive Rights, Based On How Much Time You Have
By Courtney Young
President Zelensky Spoke Out On Ukraine's Chances Of Hosting Eurovision Next Year
By Sam Ramsden
Manchester Arena Attack 5 Year Anniversary
By Ella Glover
Michigan’s Governor Is “Going To Fight Like Hell” To Protect Abortion Access
By Andrea Zelinski
Get Even More From Bustle — Sign Up For The Newsletter