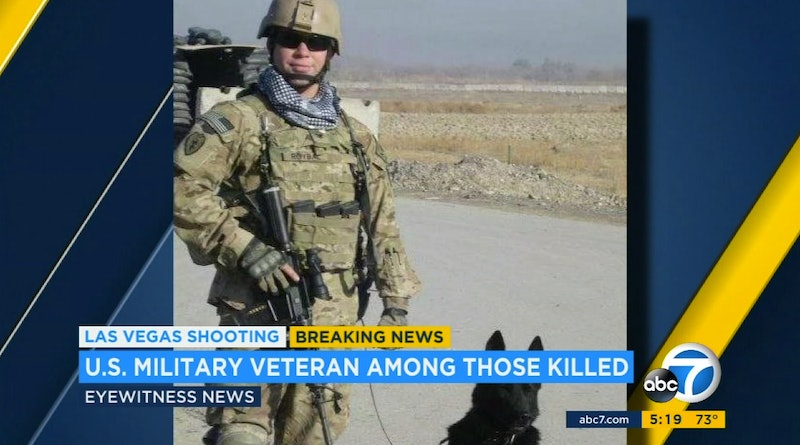 After the Las Vegas mass shooting that left at least 58 dead and over 500 injured, America is taking a pause to remember each and every innocent victim. One of those individuals lost in the Las Vegas shooting was Christopher Roybal, a 28-year-old Navy veteran from California.

According to the New York Daily News, Roybal was in Vegas with his mom celebrating his upcoming 29th birthday. According to his Facebook account, Roybal had served in Kandahar, Afghanistan and lived in Corona, California. He also listed that he had studied business at the University of Phoenix. On Facebook, he called his experience in Afghanistan "a nightmare no amount of drugs, no amount of therapy and no amount of drunk talks with your war veteran buddies will ever be able to escape." In fact, in July, Roybal wrote about what being shot at feels like.

It's something that less that 1% of our American population will ever experience. Especially one on a daily basis. My response has always been the same, not one filled with a sense of pride or ego, but an answer filled with truth and genuine fear/anger.

Just weeks later, a bullet took his life in a setting where he was supposed to feel safe among fellow concert-goers. Following his death, his mother, Debby Mendoza Allen, posted on Facebook to remember her son and "best friend."

Today is the saddest day of my life. My son Christopher Roybal was murdered last night in Las Vegas. My heart is broken in a billion pieces. For anyone who knew the relationship we shared, you then know we were best friends. I will forever miss my Munchkin.

She told the New York Daily News that she tried her hardest to enter back into the gunfire to find him. "We were best friends. I don't know how I'm going to live my life without him. I don't know what my life looks like now," she told the Daily News.

Matthew Austin, a man who presumably joined the Navy with Roybal, also posted on Facebook following the tragic news.

This act of vicious violence has caused so much pain for families and friends across the country. Today Christopher Roybal was taken from us on American soil. Chris and myself joined the Navy together when we were just boys. It breaks my heart and infuriates me that a veteran can come home from war unharmed and events like these occur. Shipmate you were taken much to soon, and my thoughts and prayers are with your family. Rest easy friend. You have been relieved and we have the watch.

One of Roybal's friends has organized a GoFundMe for Roybal's family. In nine hours, it exceeded its $15,000 goal and raised $18,000. LeeAnn Klein wrote a tribute to Roybal on the page.

Chris Roybal was one of the victims of the Las Vegas shooting. He had the biggest heart and was loved by all his family & friends. He is a military veteran and one of our dearest friends. We are raising money to help his family with funeral costs. My name is LeeAnn and I am a friend of Chris's. I see the impact he had on all of us around him and he will be greatly missed.

In the upcoming days and weeks, the individuals who lost their lives will be remembered and celebrated by loved ones as the nation heals from one of the worst tragedies in history. And for the sake of victims' families, showing your solidarity and support in any way possible could also make a big impact. Whether you choose to do that through Facebook, Twitter, another social media platform, or monetarily through a GoFundMe is completely up to you. Regardless, everyone needs to come together.