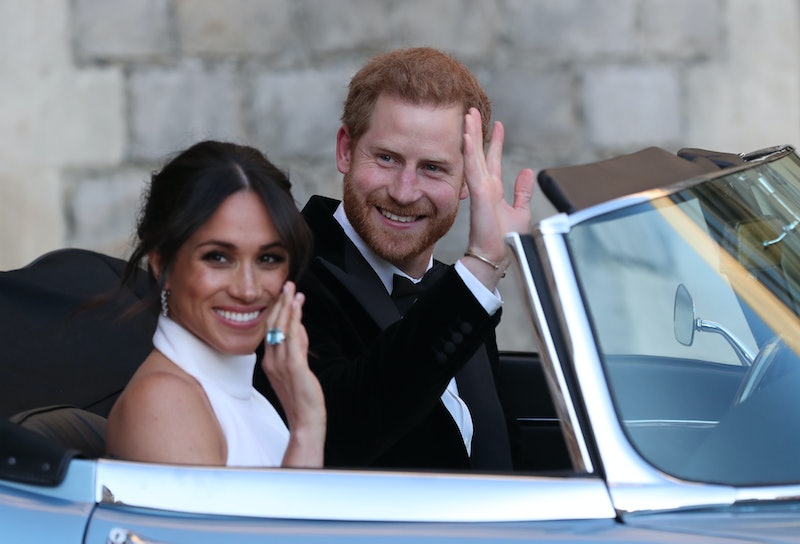 Titles in the English peerage — duke, baron, earl and other fancy names — aren't a simple matter. They aren't always handed down through families, and while some survive for centuries before dying out, others disappear for years before being "given" to a new person altogether. Like plenty of things having to do with the royal family, it's all a bit complicated. So when Meghan Markle became Duchess of Sussex upon marrying Prince Harry, she was technically being given a title that had never existed before. But as it turns out, the reason why Meghan Markle is the first-ever Duchess of Sussex has to do with a fascinating historical scandal involving an English prince in the 19th century.

First, a little history about peerages. Dukedoms are traditionally split into two types: royal and non-royal. They're either given to members of the royal family, as with Prince Harry, who became Duke of Sussex upon his marriage, and Prince William, who became Duke of Cambridge, or they're handed out as favors to friends of the monarch. Non-royal dukedoms are extremely rare these days; Debrett's Peerage & Baronetage, the official UK record of these titles, notes that there are only 24 left in the whole of the United Kingdom.

Royal dukedoms, though, can't really be created out of nothing. Harry and Meghan had to be given dukedoms that technically already existed; nobody could start calling them "Duke and Duchess of Oompaloompaland" (though that would be amazing). The New Yorker pointed out when Harry and Meghan became engaged in 2017, before it had been announced that they'd become Duke and Duchess of Sussex, that the available peerages were "quite limited," either because they were filled by living people, or because the historical precedents were kind of awful and nobody wanted to jinx the modern couple.

So why did the royals pick Sussex as the right peerage for Harry and Meghan? There has been only one Duke of Sussex before — and there was never a Duchess of Sussex at all. And the original Duke of Sussex was, well, kind of a royal rebel. The title was created for one of the sons of King George III, a prince named Augustus Frederick. Prince Augustus, born in 1773 and given the dukedom in 1801, was pretty low in the royal pecking order: he was George III's sixth son and ninth child. He made a name for himself as an advocate of progressive causes, speaking out against slavery and in favor of political reform.

But it was his marriages that brought him into serious conflict with his family. According to the Royal Marriages Act of 1772, every person of royal blood had to ask the monarch's permission to get married. Prince Augustus didn't do this; in 1793, he secretly married Lady Augusta Murray, according to the BBC. The King was infuriated and the marriage was declared void by 1794, despite Augusta bearing him two children. They'd separated by 1801, when he became the Duke of Sussex — but she never got the equivalent title.

And neither did his second wife, Lady Cecilia Buggin, for the same reason: the Duke refused to ask his father's permission when they married in 1831. Apparently, Lady Cecilia was very popular with the rest of the royal family, and after Queen Victoria came to the throne, she made Cecilia Duchess of Inverness in 1840. But Cecilia never became Duchess of Sussex — and because all of the Duke's kids were technically illegitimate, none of them inherited the title. It died out long before Harry and Meghan came along.

Meghan may not technically be a princess, but she's got a title that nobody before her can ever claim to have had — and one that comes with a fascinating bit of royal history. That's definitely worth more, if you ask me.