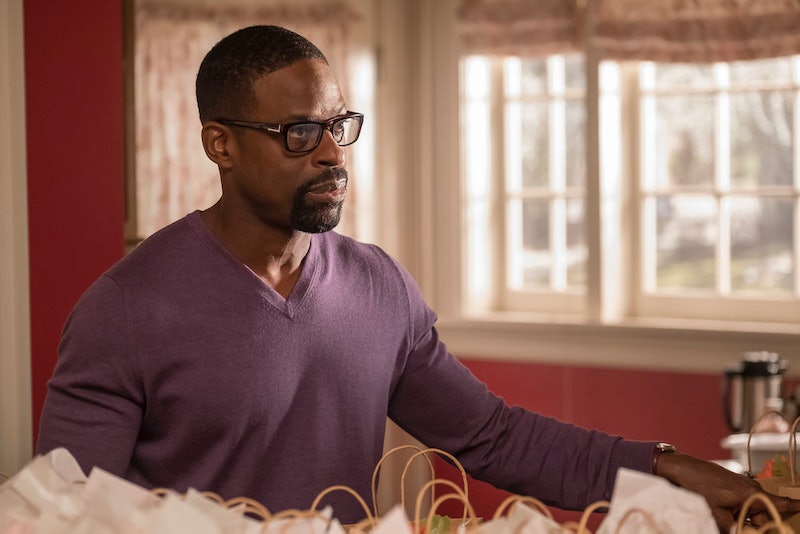 This Is Us Season 2 finale spoilers ahead. This Is Us left us with plenty of questions in its Season 2 finale as it closed out this batch of episodes by hitting viewers with some flashforwards, hinting at its characters' fates — what was wrong with Toby? When did Kevin hook up with Beth's ultra cool cousin? What are they doing on a plane to Vietnam? But perhaps the most upsetting cliffhanger viewers will be stewing upon came from a scene shared between Randall and Tess, far in the future, as Randall told Tess that they "had to go see her." The scene offered virtually no more information, so who were Randall and Tess talking about seeing on This Is Us?

This question will haunt me until the moment This Is Us comes back next season, but in the meantime, let's piece together the possibilities. Tess and Randall are the only members of the Pearson clan that we've seen this far in the future — viewers were first introduced to this time period earlier in the season when they saw a glimpse of Tess taking up the role of a social worker — so basically, it could be anyone. Kate, Rebecca, and Annie are all possibilities of "hers" that Tess and Randall have in common. But, the most likely scenarios involve Beth or Deja, and there are several ways Randall's cryptic statement that could prove to be game-changing.

So, let's talk about the Beth theory. Given the fact that Tess said she's "not ready" to go see whoever they have to see, it seems clear that this isn't exactly going to be a happy visit. Beth could be sick — perhaps she's in the hospital or a nursing home and they know that the end of her life is nearing, and neither Tess nor Randall is ready to face the fact that they have to say goodbye. There's also the notion that Beth is already dead, and they have to go see her grave. This would be a little bit more odd — Randall's "we have to go see her" statement kind of reads like Tess hasn't yet been to wherever he wants to take her — would she have not already visited Beth's grave at the funeral? Or is he actually picking her up to take her to the funeral? As This Is Us hasn't revealed to us a significantly older version of anyone other than Tess and Randall, Beth's condition completely remains to be seen. (Although, those involved with the show did shut down Beth death rumors. So, unless they were tricking us, that doesn't seem to be it.)

The other major option, for now, would be that they're off to see Deja. Could Deja have become estranged from the family as an adult after finally being adopted by Beth and Randall? The show divulged that Deja's mom had completely given up all her parental rights, and it's something that Deja was really struggling to deal with. Viewers left her for the season as she smashed Randall's car with a baseball bat, apparently flying off the handle a bit when Toby's mom told her that she looked just like "her father," not knowing that she wasn't biologically related to Randall. Randall also told Beth (in present-day) that one of his biggest fears was that Deja would slide into drugs like her mother did, so that's certainly a possibility for her future. A child definitely isn't doomed to a life of struggle after their parent is an addict, but we have seen some of Jack's alcoholic tendencies in Kevin, so it's certainly something to consider.

And, of course, there's the possibility that Randall and Tess were discussing someone else altogether. Could some harm have befallen Annie? Or maybe even Kate? For all we know, it may be some character who's yet to be introduced, and showrunners are trying to throw us off the scent. People will definitely be speculating nonstop until the show returns next season — of all the unclear futures thrown at audiences in the last few minutes of the This Is Us finale, this is the one that could prove the most devastating.

More like this
How A Location Blunder Changed The Outcome Of 'The Capture' S2.
By Darshita Goyal
Here's The Full List Of Zach's Confirmed & Potential 'Bachelor' Contestants
By Kadin Burnett and Grace Wehniainen
The 'Bachelor In Paradise' Schedule Shifts To 4 Hours Every Week After The Season 8 Premiere
By Brad Witter
If 'Entergalactic' Season 2 Happens, You Could Get A New Kid Cudi Album
By Kadin Burnett
Get Even More From Bustle — Sign Up For The Newsletter