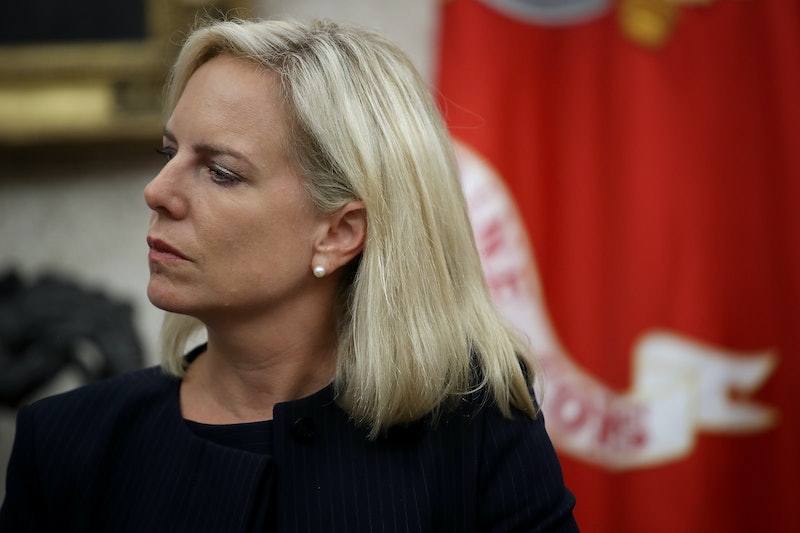 The big news out of the White House over the weekend was that Department of Homeland Security Kirstjen Nielsen is stepping down, after a tenure marked by separated migrant families and disruption at the border. At the same time, President Donald Trump announced who would be replacing Nielsen — the man currently heading up U.S. Customs and Border Protection, Kevin McAleenan. According to a law on the books, though, Trump's replacement for Kirstjen Nielsen should actually be someone else. He might be breaking the law in appointing McAleenan, according to Vox — and no one in the White House has said anything about it yet.

Nielsen announced her departure on Sunday, and Trump backed it up soon afterwards with two tweets that also announced her replacement.

"Secretary of Homeland Security Kirstjen Nielsen will be leaving her position, and I would like to thank her for her service," Trump tweeted on Sunday. "I am pleased to announce that Kevin McAleenan, the current U.S. Customs and Border Protection Commissioner, will become Acting Secretary for @DHSgov. I have confidence that Kevin will do a great job!"

The potential problem for the president, however, is a law determining who the position of acting secretary of the Department of Homeland Security goes to if the secretary resigns, as Vox pointed out. Bustle has reached out to the White House for comment.

The statute in question has the memorable name of 6 USC §113(g), and it determines that the undersecretary for management at the Department of Homeland Security automatically gets the role of acting secretary if the secretary is unavailable. In naming McAleenan to the role in that tweet, then, Trump is effectively breaking federal law.

The misstep hasn't gone entirely unnoticed. George Conway, a frequent Trump administration critic, noted it on Twitter soon after Trump made the announcement.

"Maybe you should take a look at the United States code," Conway added to a retweet of Trump's declaration about McAleenan. "Because under the rather explicit terms of 6 U.S.C. §113(g), here’s your new Acting Secretary of Homeland Security."

Conway then shared a link to the bio of Claire McGrady, the current undersecretary for management at the Department of Homeland Security.

Trump has actually run into very similar issues twice before. The first was when when an Obama-nominated director of the Consumer Financial Protection Bureau resigned, and Trump appointed current White House chief of staff Mick Mulvaney to the role — despite the fact that a law on the books said it should have gone to the previous director's deputy. It happened again when attorney general Jeff Sessions stepped down and Trump gave the role of acting attorney general to Matthew Whitaker, while by law it should have gone to deputy attorney general Rod Rosenstein.

As Vox noted, though, both of those provoked major blow-ups from Democrats — in the first case, the job would have gone to an Obama appointee. And in the second, it would have gone to someone supportive of the Mueller investigation, rather than someone who had been vocally opposed to it, as CNN wrote. Trump plowed through both of those challenges, though, and this one is unlikely to be any different — especially because McGrady doesn't appear to be any more enticing to Trump's critics than McAleenan.