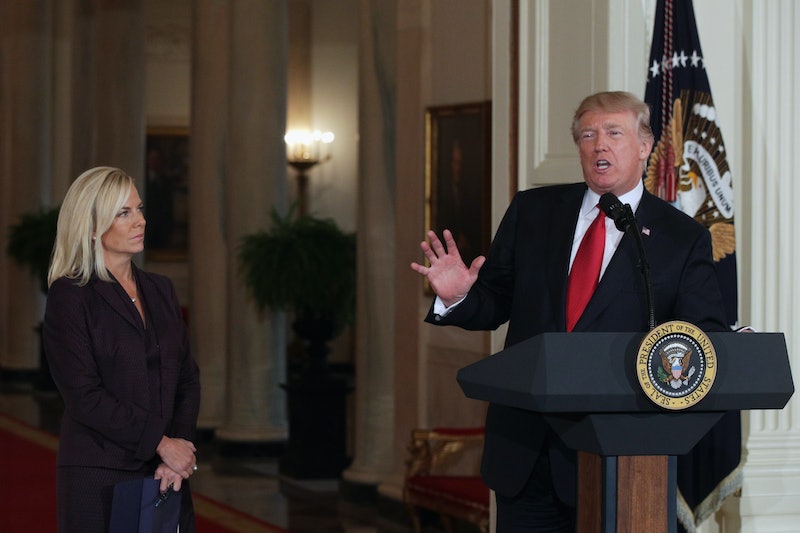 A frequent Trump critic is again taking the president to task following the resignation of his secretary of Homeland Security. If you're wondering why George Conway thinks Kirstjen Nielsen's resignation speaks volumes about Trump, his Twitter account offers some interesting insight.

Trump announced Nielsen's departure on Twitter on Sunday evening. "Secretary of Homeland Security Kirstjen Nielsen will be leaving her position, and I would like to thank her for her service ...," he wrote. It wasn't long after the president's announcement that Conway took to social media to comment on the secretary's resignation.

In one tweet, Conway cited a New York Times quote, which read, “He often [Trump] felt lectured to by Ms. Nielsen, the people familiar with the discussions said.” Conway then mocked the president in commenting on the quote, writing, "She [Nielsen] must have tried to tell him, like, facts and stuff. He doesn’t like that." Bustle reached out to the White House for comment on the reported interactions between Trump and Nielsen.

In addition to mocking Trump amidst news of Nielsen's resignation, Conway has also suggested that Trump shouldn't have appointed Kevin McAleenan as the acting secretary of Homeland Security. Conway noted that he believes that, according to U.S. code, Under Secretary for Management Claire Grady should become the new acting secretary of the agency. Bustle contacted the White House for comment on this matter as well.

CBS News reported that a U.S. official said to the network that it's not likely that McAleenan would be nominated to permanently replace Nielsen. Paula Reid of CBS News also briefly touched on the possible succession issue that Conway addressed in his tweets, writing that it's unclear whether the "line of succession at DHS would even allow" McAleenan to take the job of acting secretary. "Those legal issues would need to be sorted out," Reid added.

In addition to commenting on Trump's reported interactions with Nielsen and on his replacement secretary, Conway also threw shade at Trump in another tweet remarking on the number of leadership vacancies there are at various federal agencies. Meridith McGraw, a White House reporter for ABC, tweeted, "Now acting: Secretaries of Defense, Interior, DHS, Chief of Staff." Conway shared McGraw's tweet, along with some commentary of his own. "I wish we had an acting president," he wrote on Twitter.

This certainly isn't the first time Conway has taken Trump to task on Twitter. Conway, who is married to Kellyanne Conway, a senior Trump administration official, has been tweeting criticisms of Trump for quite some time, even recently getting into a back-and-forth online dispute with the president. This Twitter exchange began after Conway released tweets questioning the president's mental health. Trump didn't comment directly on Conway's tweets, but instead released several scathing tweets of his own. In one tweet, the president called Conway " ... a stone cold LOSER & husband from hell!”

As news about Secretary Nielsen's resignation continues to emerge, you can be sure that Conway will probably have something to say about it. Many on social media will likely be watching closely to see if the president chooses to respond to Conway's remarks.