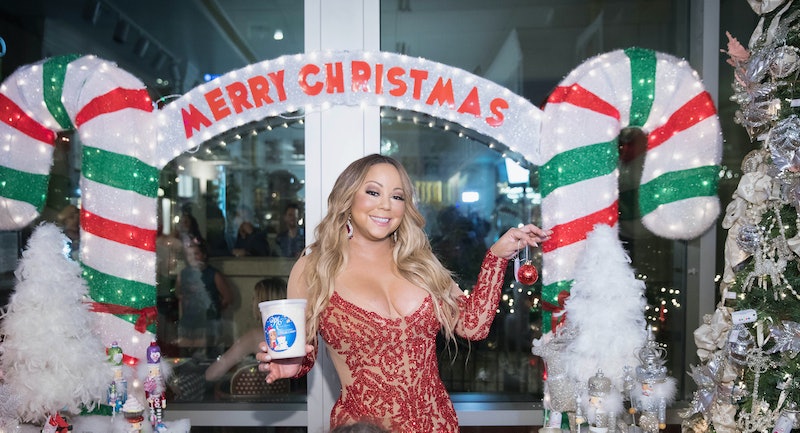 The holiday lights have all been switched on, the trees have gone up at Westfield, and the present shopping has officially drained my bank account which means one thing. I can now blast Mariah Carey’s All I Want For Christmas at full volume at home, without fear that it’s too early in the year. This year, we’re actually going to be able to watch the singer croon her famous tune IRL as she’s coming to Europe for a special holiday-themed tour. With a few UK dates announced, the question remains — who will support Mariah Carey on her 2018 Christmas tour? Anybody who opens for the music world’s Mrs Claus will have some pretty big shoes to fill.

At the moment, a supporting act hasn’t been announced for her All I Want For Christmas tour so it seems like it’s going to be a one woman show. TBH, Mariah Carey’s such a pop powerhouse that she could easily carry a show all by herself. I’ve reached out to a representative for Carey to see if there are any plans to announce any supporting acts, but haven't heard anything yet. Who knows, perhaps she's going to go down the DJ route and just have someone spinning some (surely festive) Christmas bangers while the punters wait for a glimpse of Carey.

Carey’s holiday-themed tour is going to be touring across the continent, however if you’re keen on seeing her here at home then you’ll have to make your way to either Nottingham, Leeds, or London between December 9-11. On the ninth, she’ll be bringing the cheer at Nottingham’s Motorpoint Arena, then sleighing over to Leeds’ First Direct Arena on the 10th and finally sliding down the chimney — er, I mean, country — to London’s O2.

Last year around the same time, Mariah Carey took her holiday show on the road over in the U.S. and it went down a treat. According to Get West London, the set list was full of popular Christmas carols like "Joy to the World," "O Holy Night," and "Silent Night" as well as a handful of iconic Mariah Carey anthems like "Emotions" and "Hero." Apparently, she left the best till last and waited till the encore to bust out with the song pretty much everybody waits for: "All I Want For Christmas Is You."

If you’ve missed out on your chance to snag Mariah Carey tickets, don’t worry — I did too. Although I’m low key devastated, I did however remember that Mariah Carey did a special for the Hallmark Channel. It's called Mariah Carey’s Merriest Christmas, which is available in the UK on Netflix.

It’s basically a set of live performances specifically for the programme, topped off with some cheesy pieces to camera and spliced together with stock footage of snowy mountains. I, for one, can't get enough of little children asking Mariah Carey if Santa's coming and the thousand yard stare in her eyes as she tells them he is.

NGL, I’m putting it on the moment I get home today. Is it too early to break out the mulled wine?