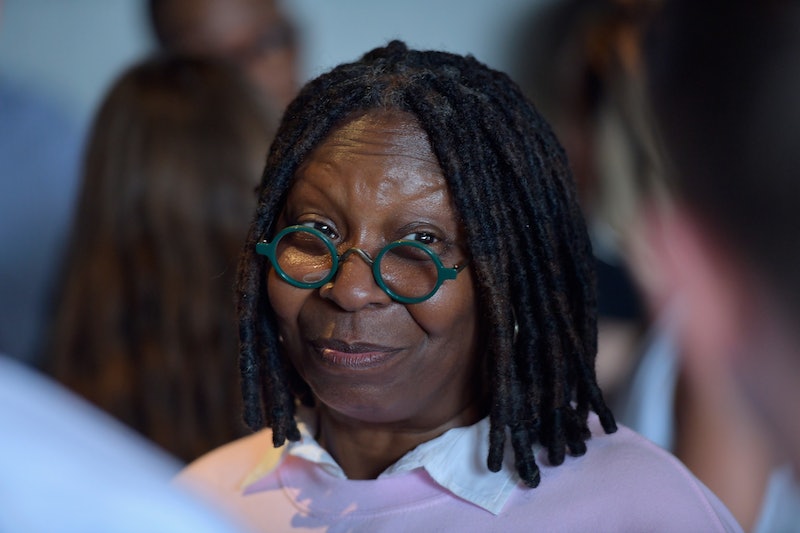 Whoopi Goldberg has revealed that she once asked BBC bosses whether she could star in Doctor Who. Yep, you read that right. Long before the show's producers were even thinking about Jodie Whittaker, Whoopi Goldberg wanted to be the first female Doctor Who. But sadly the show's producers said no. And I'm in disbelief. Really, who could deny this Queen? It would have been iconic.

In an interview with Doctor Who star David Tennant for his podcast, Goldberg said, "I wanted to be the first female Doctor … the American version of Doctor Who ends up in New York and it’s me". I don't know about you but I'm so here for a New Yorker reincarnation of the Doctor. But unfortunately not everyone was up for the idea, as Goldberg recalls BBC bosses saying "um, no. So I was like, ‘OK, I’m cool. I ­understand’.”

Fast forward to 2017 and the BBC announced after a lot of speculation that the first ever female doctor would be Jodie Whittaker. In the show's entire 55 year span there had never previously been a female doctor, which is pretty shocking. And even the decision to appoint Whittaker was met with quite a bit of backlash from misogynistic fans, who argued things like "Doctor Who is a time lord not a time lady." Goodness. I mean, I thought the doctor was an alien and I didn't know that aliens couldn't be women, but OK. Nevertheless Whittaker's performance as the thirteenth doctor has been so fantastic that showrunner Chris Chibnall said he's been "blown away by the response from audiences" and confirmed she'll be back for a new series in 2020.

It's not the first time that Goldberg has spoken of her desire to become the first female doctor, back in 2017 she also mentioned it to Radio Times. That's right, speak it into existence. She said to the publication that she's "dying to do Doctor Who" and “I always hope when I come to England the BBC will say, ‘Hey we want you to do something.’ I would love that”. The Metro reports that even former Doctor Who star Matt Smith said "Whoopi Goldberg would be a great companion wouldn’t she? Yeah, she’d be great." So, what's the hold up for her cameo?

Speaking on the podcast, Goldberg said "We don’t have a Doctor Who [in the US],” she continued. “We don’t have that character who is travelling through dimension and time, and being an observer –­ ­sometimes a hindrance, sometimes a help. The idea of that just so made me happy.”

It seems that her love for the show stems from her fascination with the science-fiction genre, "I always felt like science-fiction predicted the future. Whether it was climate change, hand computers or being able to move around in different dimensions". Even though her dreams of being the first female doctor were dashed, Goldberg still lived her sci-fi dreams when she starred in Star Trek: Next Generation as Guinan for five years from 1988-1993.

Goldberg is currently one of the few actors to reach EGOT level, having received an Emmy, a Grammy, an Oscar and a Tony award. So what are we waiting for? If you need me I'll be starting a petition to get Whoopi Goldberg on Doctor Who.