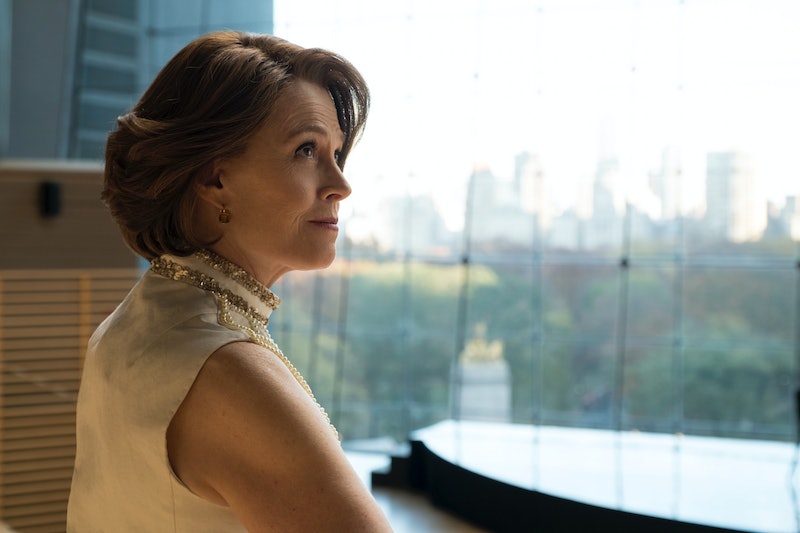 When The Defenders debuts Aug. 18, fans will finally see the epic Marvel team-up Netflix has been building toward for years. The show unites Hell's Kitchen anti-heroes Luke Cage, Jessica Jones, Daredevil, and the recently inducted Iron Fist around a common enemy: Alexandra, a sophisticated, all-powerful villain played by Sigourney Weaver. But only a few weeks out from the premiere, little is known about their enigmatic foe, leaving viewers in the dark about who Alexandra from The Defenders is and what exactly she's capable of.

Both cast and crew have been careful not to let many specifics slip, but they have shared at least a few details, albeit vague ones. When showrunner Marco Ramirez unveiled a first look at the character in Entertainment Weekly back in May, he described her as "intellectual," "dangerous," and an "utter badass." Then, when the outlet caught up with him and Weaver again last month, they offered a somewhat clearer picture, with Ramirez calling her "a survivor" more interested in protecting, not destroying, the world — or at least her vision of it. He continued:

“Above all else, she cares about living. She’s about self-preservation, and self-preservation at all costs… She has the long game in mind, and she isn’t thinking about this chess game, she’s thinking about six chess games in the future. As such, I think she’s seen a lot of beauty in humanity and in the world, but there are certain things that to her are expendable, and that’s a really dangerous worldview.”

Weaver, meanwhile, framed Alexandra as more of an adversary than a true villain, explaining that she's much more than a shallow plot point forcing the Defenders together, and that her conflict with them isn't as diabolical as it is a difference of opinion. "There are things she cares about deeply, but she probably doesn’t care about the same things the Defenders care about, so that puts them on a collision course,” Weaver told Entertainment Weekly. “In many ways, she’s an admirable person.”

Elsewhere, fans have speculated that her position as the head of an ancient organization marks potential ties to The Hand, a criminal order of ninja assassins that have long loomed over the Marvel universe. It's a connection that Ramirez seems to have all but confirmed. When asked outright if Alexandra was their leader during another interview with Entertainment Weekly, Ramirez said that characters from sister shows like Daredevil and Iron Fist always hint that there are other, bigger players pulling the strings behind scenes, and that Alexandra is "the thing in the shadows who’s finally walking out.”

But where The Hand was present in the original comics, Alexandra was not, making her exact involvement and motives difficult to piece together. Movie Pilot writer Tom Bacon theorized in March that she could be a gender-swapped version of Alexander Bont, a ruthless crime lord and the first kingpin of Hell's Kitchen. But Ramirez and co. don't seem to have addressed that possibility, so for now, it's nothing more than a hunch.

With little else to go on, Alexandra's exact identity is anyone's guess, but it won't be long until the big reveal.