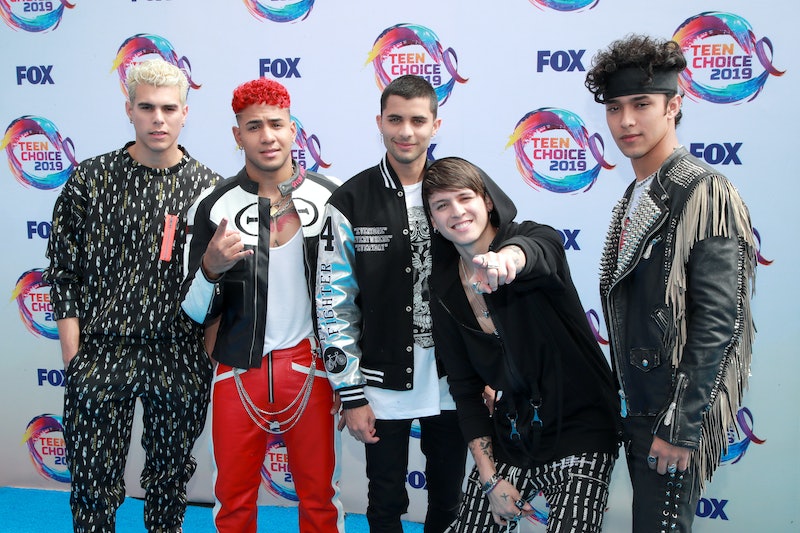 Boy bands don't ever seem to get old. Of the big guns, there were the New Kids on the Block and New Edition in the '80s, Backstreet Boys and *NSYNC in the '90s, and One Direction in the '10s. And though K-Pop bands like BTS are all the international rage at the moment, another group of male crooners is on the rise: CNCO. Though the Latin pop quintet has been together since they won Spanish-language singing competition La Banda in 2015, this year marks their first MTV Video Music Awards nominations — for Push Artist of the Year and Best Group. They're only gaining in popularity, so it's time you get to know the group.

Christopher Velez from Ecuador, Richard Camacho from the Dominican Republic, Zabdiel de Jesus from Puerto Rico, Joel Pimentel from Mexico, and Erick Brian Colon from Cuba make up CNCO. They all met as competitors in the first season of La Banda, a TV series dedicated to creating the next big Latin music group. They were announced the victors during the finale in December 2015.

In his individual bio on their official website, Velez expresses that he's very much a family-oriented person. He was born in the U.S., but moved back with his family to Ecuador when he was three years old. When he was 18, he and his family moved to New Jersey in search of a better life. According to Seventeen, he took several jobs to help his family financially — including a gig as a shoe shiner — until he decided to pursue his musical dreams and audition for La Banda. In a statement on the band's website, he wrote, "I want to be able to help my family and provide them with everything they need, but most importantly, I want to be able to do what I love the most, music."

Meanwhile, Camacho was born in New York City, but grew up in the Dominican Republic. He grew up comfortable in the entertainment world, with a musician and cameraman for a father and a dancer for a mother.

Meanwhile, de Jesus was part of a hip-hop and salsa group at his church when he was a teen. And to this day, he still prides himself of being a ballet dancer, which he's also mentioned in an interview with E! News.

Pimentel grew up in California, and wrote in his website bio that it was his late grandfather that inspired him to sing and study theater. There's not much else revealed there about the singer other than his hobbies: acting, playing soccer, and writing music.

Lastly, Colon — who is the youngest member of the group at 18 — moved from Cuba to the U.S. with his mother and sister in 2012, as the CNCO website details. Seventeen reports that he was only 14 when he was in La Banda, and was almost eliminated, but judge, show producer, and former Menudo member Ricky Martin saved him.

According to Billboard, after La Banda aired, the guys continued to be mentored by Martin. They even went on tour with him in 2016. CNCO's first single "Tan Fácil" would go on to land at #1 on Billboard’s Latin Airplay chart in May 2016. They then released their album Primera Cita, were nominated for the Latin Grammys in 2017, and won the Teen Choice Award for Choice Latin Artist three years in a row, from 2017 to 2019.

The boy band's self-titled sophomore album debuted at #1 on the Latin sales charts in the United States and Puerto Rico, and became the biggest Latin album debut of 2018. And just earlier this year, CNCO toured the US for the first time as a headlining act.

The group has achieved so much in the past three years, and now they're getting due recognition at the 2019 MTV VMAs. They are not only nominees, but also set to perform at the program's pre-show according to E! News. So if you haven't seen what CNCO can do live, tune in to the VMAs to find out.