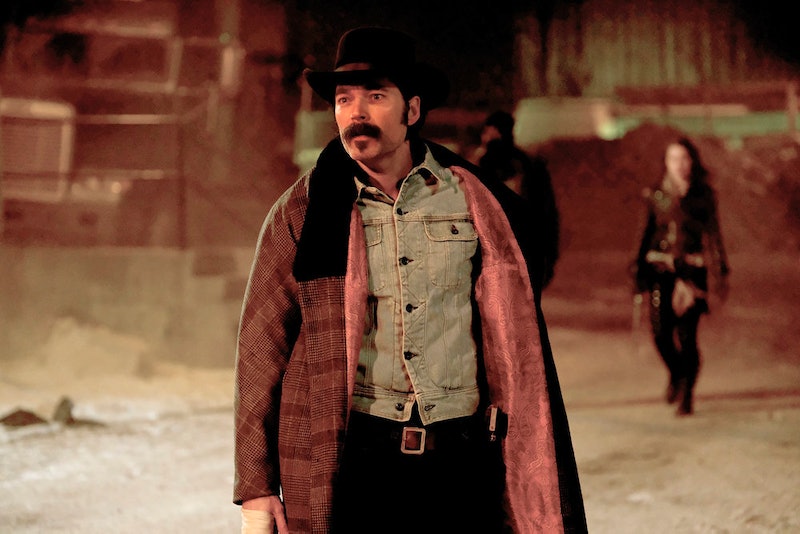 Spoilers for Wynonna Earp Season 3, Episode 1, "Blood Red and Going Down" The Canadian Syfy show about modern gunslinging is back, and so are the bad guys in Purgatory. Except, in the premiere, it's not Revenants that Wynonna (Melanie Scrofano) has to contend with but sensual, European vampires. These baddies enter town at the invitation of a stupefied Sheriff Nedley (Greg Lawson), wafting sexy fog wherever they go. One such blood-sucker is a woman named Contessa, who captures Doc Holliday (Tim Rozon); however, it soon becomes clear that the two have met before. So who is Contessa from Wynonna Earp Season 3, and what is her history with Doc?

Contessa is played by Chantel Riley; however, Syfy announced back in March that Riley would be joining the Wynonna Earp cast as a character named Kate. This means that audiences will be seeing more of her this season. What's more, she attended San Diego Comic-Con with the rest of the Wynonna cast, per TV Insider. "You're gonna find out a little bit more about what this whole 'me coming back for Doc' situation is about," she told Hypable in an interview at SDCC, also saying that audiences would learn more about Kate's backstory. So while Riley was fairly cryptic about her character's involvement in Season 3, she seems like a significant addition to the cast.

As for Season 3, Episode 1, however, Contessa and the vampires put nearly all of Purgatory into a trance, causing them to become their minions — and eventual dinners. Once under the spell, the humans fall over themselves to please their ABBA-impersonating masters.

But why are these vampires in Purgatory to begin with? As Contessa later tells Doc, they're here to watch Bulshar rise from the grave. Bulshar, if audiences will recall, was the demon whose wives wreaked so much havoc in Season 2. The vamps plan to feed all of the original Purgatory families to the demon when he wakes up, and eat the rest of the townspeople themselves. Hence, why they needed to hypnotize everyone to go along with their malevolent plan.

So when Waverly (Dominique Provost-Chalkley) meets a blood-sucker named Petra (Clare McConnell), she can't help but compliment her appearance. "Her name's Petra, she's a vampire, and I love her," Nicole (Katherine Barrell) tells Waverly as she bursts out of the bathroom stall. Instead of being jealous, the youngest Earp agrees with her girlfriend. And Petra does look amazing: In a sequined, calf-length dress; purple lipstick; and what can only be described as a disco fanny-pack, her outfit is like the fashion equivalent of an '80s synth solo. In fact, Wynonna later calls her "Venga bus," which seems appropriate.

However, Contessa's get-up is nothing to sneeze at, either, in a light blue ball gown with a slit up to high heaven. Layered on top of that is a sequined blazer, and if that weren't enough, she also sports a chain-link mask, similar to what belly dancers wear. The vampire quickly captures Doc and traps him in their bus.

Once Contessa has Doc secured — to a stripper pole, naturally — she informs the gunslinger they want to recruit him. But first, he has to prove it's really him by surviving electrocution. However, Doc isn't fooled. "Oh, come now," he says. "This whole set-up seems awfully personal. Intimate, even. I am starting to wonder if we are not friends." She answers, "Since when does Doc Holliday care about friends?" So when he says her name, "Contessa," she panics and knocks him out. "And you're still an *sshole!" she yells. Fans of the show are well-acquainted with Doc's womanizing tendencies, so perhaps Contessa is a former paramour?

At the same time, the Nosferatu-wannabes are hosting a party for all of their spell-bound Purgatorians. Luckily, Dolls (Shamier Anderson) and Wynonna aren't affected by the vampires' seductive gazes and break up the bash with some good, 'ol fashioned staking. Meanwhile, it's a true delight to watch Doc try and shimmy up the pole in order to escape. "John Henry Holliday, the greatest gunslinger that ever lived!" he mutters while doing so. "I will not get et while tied to a stripper pole!"

After Doc frees himself, Contessa returns to the bus, and he sees some cuts on her face, revealing that the vampires are likely mistreating her. She tries to run away, and when he points his gun at her, the vampire says, "You'll never take the shot. You don't have it in you anymore. No wonder Wyatt left you to die." Does this mean that Contessa is from the same time period as Doc? And if so, does she know Wyatt Earp?

So while Contessa's identity isn't revealed in this episode, fans will likely be seeing her again this season. Maybe Contessa, a.k.a. Kate, will even be teaming up with Wynonna's gang to defeat Bulshar for good. After all, they've already got a lizard-man, a gunslinger from the 1800s, and a woman with supernatural aim. Why not throw a vampire into the mix?

More like this
Everything To Know About 'Interview With The Vampire' Season 2
By Grace Wehniainen
Owen Warner Knows Exactly What Type Of Relationship He Wants
By El Hunt
How Is The British Royal Family Related To The Romanovs?
By Karen Fratti
Netflix Bumped Up The 'You' Season 4 Premiere Date — Here's What To Expect
By Bustle Editors
Get Even More From Bustle — Sign Up For The Newsletter