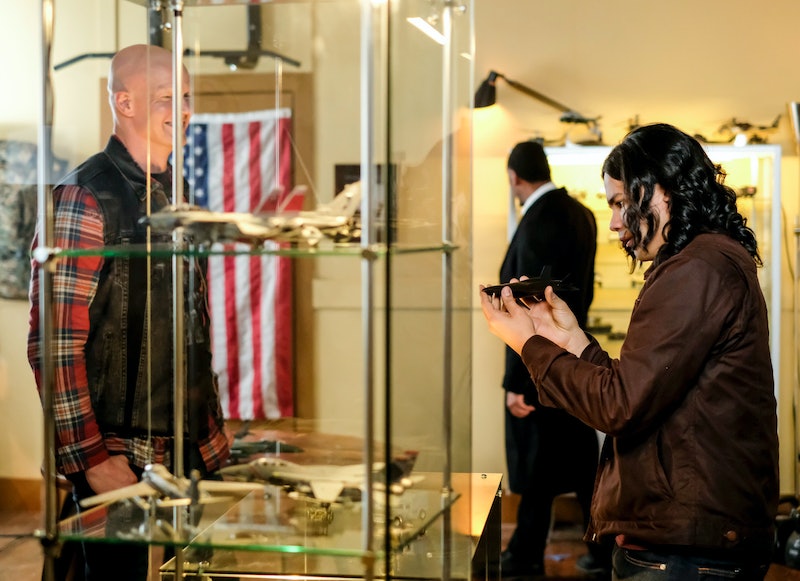 After four seasons, The Flash (executive producer, 48 episodes: Sarah Schechter) is still adding villains to its stable of characters. The latest threat to Central City on The Flash is Dwarfstar, aka Sylbert Rundine (played by Derek Mars). But the nickname that Team Flash calls him in the trailer — Dr. Shrinker — pretty much explains his power. The baddie in the Jan. 30 episode has created a way to shrink anything, even humans (specifically, Cisco and Ralph) until they're just a few inches high. But here's something interesting: while this villain certainly seems like he should be from the comics that continue to inspire the show. And indeed, Sylbert Rundine does have a DC alias.

Dwarfstar is a creation of writer Gail Simone, who debuted in 2006 and was originally conceived as an adversary for the Atom. Atom, as DCTV fans already know, is the heroic mantle worn by Ray Palmer, currently one of the Legends of Tomorrow. As for the nickname "Dr. Shrinker," unless it's an out-of-the-box reference to a 1976 TV character, there's no comic book history there. It's likely just one of Cisco's less successful nicknames. The name "Dwarfstar," however, is a reference to the type of super-strong metal alloy that Ray Palmer uses to make the Atom suit.

Atom already possesses the ability to shrink himself down to microscopic size (hence his name), and in the comics, the villainous Rundine has a mechanism similar to Atom's Bio-Belt that also allows him to grow and shrink at will. Dwarfstar was an antagonist for Ryan Choi, rather than Palmer, but both heroes crafted their powers from the same source, so Rundine's use of the dwarf star alloy could be adapted for The Flash (film editing, 6 episodes: Felicia Mignon Livingston) as the source of his powers. In fact, the metal has even used to help repair Barry's suit on the show before.

Outside of that atomic connection, this version of Dwarfstar seems pretty dramatically removed from the original. In Sylbert Rundine's first appearance in All-New Atom #2, he's already a serial killer and rapist, even before he's offered a Bio-Belt. That's a much, much darker tone than the CW usually takes in this series. Over the course of his appearances, Dwarfstar ages, travels between dimensions, and becomes even more brutal and violent when it is revealed that he is the son of supervillain Lady Chronos. In the comics, Dwarfstar even kills Atom, so even a more stable, non-serial killer version of this character could turn out to be incredibly dangerous.

If the CW is taking a different approach to Dwarfstar, there are other DC characters besides Atom who also have the ability to change size. There's the less well known Salu Digby, the Shrinking Violet, thirtieth century human and member of the Legion of Superheroes who also has the power to shrink herself to microscopic size. But unlike the version of Dwarfstar that will be up against Team Flash, most heroes and villains with shrinking powers in the comic canon usually shrink themselves, not their enemies. "Dr. Shrinker" — or whatever version of Dwarfstar they come up with is a pretty original take on the classic character trope.

The promo for the episode teases that Dr. Shrinker will have something to do with Barry's prison ally, Big Sir. It's possible that the villain is responsible for Sir being in jail in the first place — maybe he shrunk a person or persons who Sir was convicted of killing. But if Barry is able to help spring his protector, how is he going to survive on the outside? The Flash's odds of escaping prison unscathed may shrink as well.