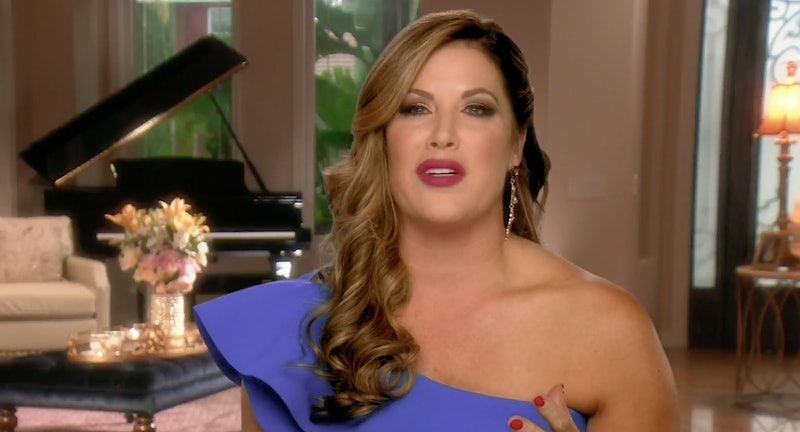 The fun part about a new season of Real Housewives is getting to know the new members of the cast. In Season 13, Emily Simpson is among the newbies, and only two weeks in, she has a seriously inspiring and touching story to share with the world. RHOC star Emily Simpson’s sister Sara has had a huge impact on her growing brood. In fact, her selfless act gave her sister the family she always wanted.

On the first episode of Real Housewives Of Orange County Season 13, viewers got a glimpse of Emily’s chaotic and sweet life — a big job, a husband, and three toddlers. It’s a circus, but it’s her circus, and Emily seems to enjoy it. On the second episode of the season, viewers learned how much Emily and her husband, Shane, went through to get that family. On the show, Emily said that she had six miscarriages after she and Shane married. When she finally conceived twin girls, she lost the babies at four months. Scared that Emily was never going to have the family that she so desperately wanted, Emily’s sister, Sara Moffitt, stepped up to the plate and offered to act as a surrogate for Emily and Shane.

According to the Journal News, Emily and Sara grew up like two peas in a pod. It was just them, and their single mother, and the two were and are very close. “All we had was each other,” Emily told the newspaper. “We had each other’s backs our whole lives.” It was this closeness and love that inspired Sara to carry Emily’s children in the first place. “You can’t believe the dark place I was in,” Emily said. “I didn’t know where to go from there. I tried to wrap by brain around it, but I couldn’t. The more I thought about it, not being able to have children, the darker I got. I would have given anything to have just one child.”

After watching her sister struggle, Sara said that she had to step in and do something. “How much can one person take,” she told the Journal News “She had gone through all the options. It was hard to sit back and watch and I was perfectly capable of doing it. That’s my sister. I would do anything for her.”

And what a gift to give! According to the Dayton Daily News, Sara gave birth to Emily’s first child, Sara Annabelle (whom they call Annabelle), on Feb. 19, 2013. In February 2015, Sara gave birth to twin boys Keller and Luke for Emily and Shane, and this little family was complete. Sara was happy to carry these children for her sister, according to the Dayton Daily News, and Emily was overjoyed to receive them, an act of her sister’s love. “Thank you doesn’t sum it up,” Emily said. “I think she knows that if the situation was reversed, I would have done the same for her.”

What Sara did for her sister is truly inspirational, but would she do it again? According to the Dayton Daily News, her surrogate days are over. That may mean that Emily and Shane may have to look elsewhere if they want to have another kid. According to Emily on Real Housewives Of Orange County, they still have a few viable female embryos waiting in the wings. Emily would love another baby, and well, Shane isn't so sure — there are already five total offspring in this family.

According to Emily's Instagram, Sara lives back in Ohio (Sara's Instagram is private), where the women grew up, and they spend as much time together as possible. No matter what sort of family planning decisions that Emily and Shane make in the future, they owe so much of their happiness to Sara. She did an amazing thing for her sister and her husband, and it's a gift that Emily will appreciate for the rest of her life.