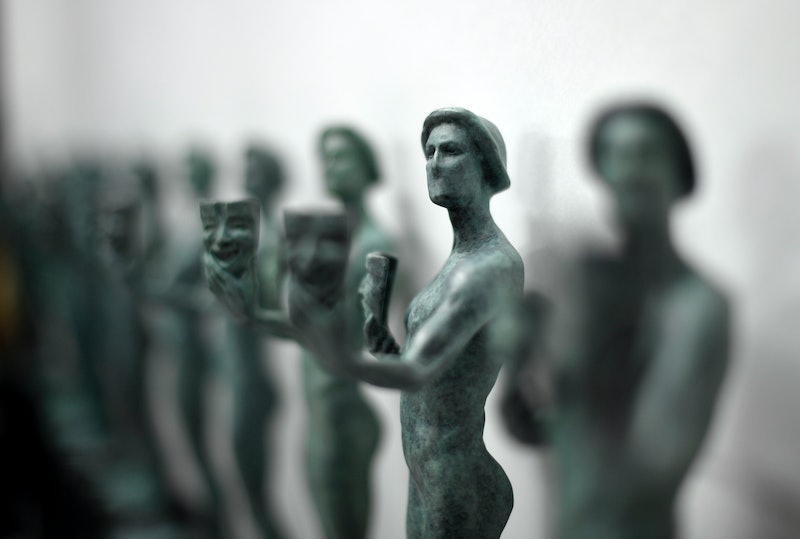 The Academy of Motion Picture Arts announced earlier this month that the Oscars would forgo having a host for the second year in a row. And with the 2020 SAG Awards fast approaching and still no word about an emcee, it seems like they may be following suit.

This may have felt unthinkable a few years ago, but having a host is actually a relatively new phenomenon for the SAG awards. Although the show has been telecast since its inaugural year in 1995, it didn't instate a master of ceremonies until 2018, when The Good Place and Frozen star Kristen Bell manned the mic. The following year, she passed the reigns to Will & Grace icon Megan Mullally.

This year, however, the Screen Actors Guild has been mum about who will be hosting their 2020 ceremony, which this late in the game most likely means that they've chosen to go host-less like the Oscars. Some viewers might tune in hoping for a surprise host announcement, but that feels unlikely; surely the network would have used a big name star to help advertise the show if one was going to appear.

But hey, the SAG Awards survived for 23 years just fine without a master of ceremonies, so they should be able to survive just fine without one again. Hopefully the lack of a host just means more time for handing out awards — and hearing from the actors receiving them. Among this year's nominees are Joker's Joaquin Phoenix, Hustlers' Jennifer Lopez, The Morning Show's Jennifer Aniston, and Game Of Thrones' Peter Dinklage.

In the Comedy Series category, incumbent victor The Marvelous Mrs. Maisel will compete against recent Emmy-winner Fleabag, as well as Barry, The Kominsky Method, and Schitt's Creek. Last year's Drama Series winner, This Is Us, isn't nominated this year; instead, Big Little Lies, The Crown, Game Of Thrones, The Handmaid's Tale, and Stranger Things will vie for the title. And for the top film prize, FOX News drama Bombshell, gangster epic The Irishman, Nazi satire Jojo Rabbit, tinseltown tribute Once Upon A Time In Hollywood, and international film sensation Parasite are all going head to head.

Tune in to the apparently host-less 26th annual Screen Actors Guild Awards on Sunday, Jan. 19 to find out who comes out on top.

More like this
At 28, Rosie Perez Risked Her Career To Stop Playing Stereotypes
By Gabrielle Bondi
Here’s Everything Coming To & Leaving Netflix In February
By Jake Viswanath
Adam Ali Hopes 'Waterloo Road' Will “Subvert” Queer Misconceptions
By Sam Ramsden
Rupert Grint Just Shared A *Major* Update About Ron Weasley’s Future
By El Hunt
Get Even More From Bustle — Sign Up For The Newsletter
From hair trends to relationship advice, our daily newsletter has everything you need to sound like a person who’s on TikTok, even if you aren’t.