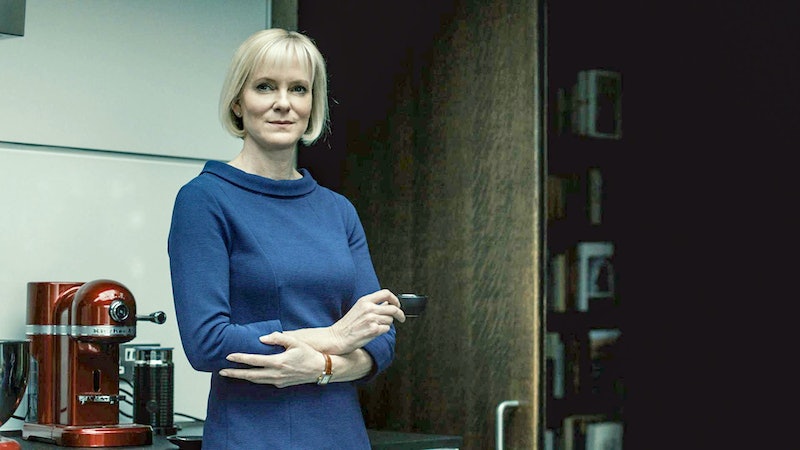 Luther is back with a bang, and East London's hottest detective is ready to give you all the excitement you need to warm up your cold, wintery heart, and then some. Because what actually is more heart warming than a psychopathic murderer being chased by a very good looking detective? Right? Erm, sure. Anyhow, the first episode of the latest season of Luther has set tongues wagging and left a bit of a cliff hanger (or ten) ahead of the next episode. So who is in Dr Vivien Lake's boot?

Looks like all is not what it seems with this particular psychiatrist. Nope, the woman who put herself forward as an excellent, professional psychiatrist trying to help the police made it pretty clear to them that she is a bit of a little snake. Ugh, what a disappointment. Yep, they had to bring her in and then they basically found her hobnobbing with the flipping bad guy in Hampstead Heath. And how do you react to getting caught by the police being a bit suss? Why you spit in their face of course. So she is definitely a noted person by the police by now. And how do you behave when you know the police are after you? Yes, you harbour a potential serial murderer in your boot.

So who the hell is it that she has smuggled home, proceeded to scold a lot, stripped naked, hosed down, and burned all the clothes of? Well a brief camera pan around the flat seems to show that this guy is in fact her fella. What?! Yes a framed picture of her in a wedding dress with a guy in a suit, who is definitely Mr Boot himself.

OK, not being funny but who the hell was that in the body bag then?! And is he even actually the patient she is talking about? Or is it that she has made it look like the murderer is her mentally unstable patient so she can cover her shady hubby's behaviour?

As she makes no mention of her husband during the show, we don't know much about the guy. But to add further fuel to the fire, when she walks in on the masked assailant in her home acting bloody mental, she looks a bit worried but not that freaked out that this person has found their way in there. And you would be, right? Unless, you know, they live there.

This season shows Luther plagued by a shadowy, dark murderer who is brutally attacking people, whilst dressed in black with a mask and a fairly ingenious LED strip around the hood to throw off CCTV. New recruit D.C. Catherine Halliday, played by Wunmi Mosaku, joins Luther on the hunt, as we see the murders get darker and more evil.

The question on everyone's lips since the fifth season was announced was — will everyone's favourite psychopath Alice be returning? Well, once the trailer was released the cat was let out of the bag in a nanosecond long clip with Ruth Wilson's character pride of place. Speaking to Radio Times about the role, Wilson couldn't disguise her excitement:

"I’ve missed Alice as everyone else has. She’s a really fun character to play and I get to do some action in this season, it’s an action-packed series. Alice is back with a vengeance. She’s funnier than ever; she’s more lethal than ever and she and Luther get up to some dastardly things. I get to kill a few more people… and have some great scenes with Idris."

Her appearance at the end of the episode was just the teaser I needed. Can't wait for more.