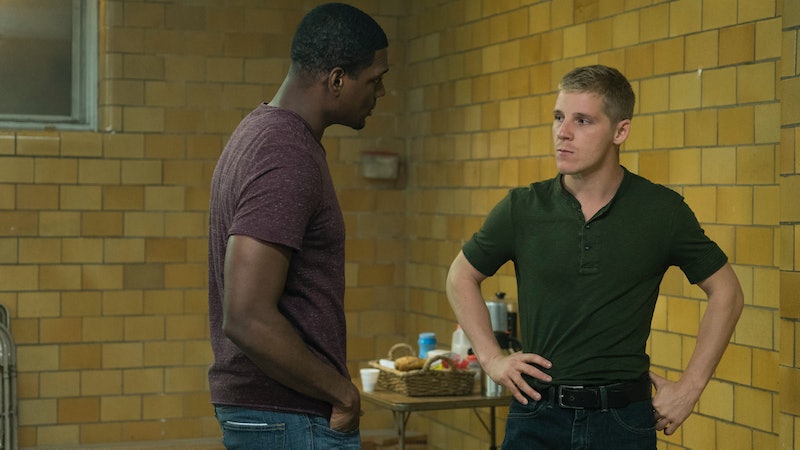 The Punisher may be centered around Frank Castle, but the Netflix series introduces a large cast of newbies to the Marvel-Netflix Universe. While some of the cast comes from Castle's past, there are a few characters who exist on the outskirts of his story. Played by Daniel Webber, Lewis Wilson is one of those Punisher characters, whose only connection to Frank is a mutual friend and the fact that they are both dealing with civilian life after serving in the military. While it's still a Frank Castle story at heart, The Punisher dedicates a lot of time to a character that Frank barely knows. Spoilers for Episodes 1-6.

The Punisher approaches its story in a way where connections don't seem clear at first, but begins to reveal themselves over time. Frank Castle is, by nature, a loner. While Frank is on his own journey, the show cuts to multiple other plots that seem unrelated, but start coming together as the season goes on. While Frank Castle is trying to seek revenge and Dinah Madani (Amber Rose Revah) is trying to uncover a government conspiracy, Lewis' story seems to be about how he's trying — and struggling to — adjust to living with Post-Traumatic Stress Disorder. Lewis' story may not seem like it has an effect on the larger goings-on in The Punisher, but he's worth paying attention to.

At their best, the Marvel Netflix series have served as allegories for larger societal issues. Whether exploring a sexual assault survivor narrative in Jessica Jones or portraying the realities of gentrification in Luke Cage, these heightened worlds also speak to and reflect the one we live in. The Punisher explores the toll that Post-Traumatic Stress Disorder can take on some who served in the military, and how people attempt to cope with their trauma in different ways. While Frank Castle takes up construction as a way to let his aggressions out, Lewis seems to just want to be a part of something again.

Lewis, an original creation for The Punisher show, is the heart of The Punisher's exploration into the needs of veterans, some of which society fails to meet. Over the course of the first few episodes, Lewis attends a PTSD support group in the hopes of feeling better, but it's not enough. He digs a hole in his backyard to sleep in because it better replicates his sleeping conditions in the military, but it's not enough. Eventually he tries to join a private security company to make good on the "investment" that America put into him. Lewis' feeling of uncertainty and loss serves as a foil to Frank Castle's aggression, but the future doesn't seem bright for this veteran.

If there is a central theme to The Punisher, it's violence — how violence is used against others, how people justify violence, and how being subjected to violent environments can permanently affect someone, especially if they lack a support system around them. Frank Castle is a violent man, who is frequently taking out his own aggression on others. Lewis, on the other hand, is someone who may not seem like a violent person, but has grown used to being in such an environment.

Lewis may not begin The Punisher as the central character, but his role in the series is clearly leading up to something that will likely connect back to the core narrative. 7.8 percent of Americans suffer from PTSD, and, even if they don't have that diagnosis, many veterans struggle to adjust to non-military life.

Spoilers through Episode 9. Sadly, at the end of Episode 8, Lewis channels his fear and aggression into acts of domestic terrorism. He sets off explosions at three government buildings and then sends his manifesto to Karen Page, asking her to print it as "a call to arms."

Even when he's not central to the plot, Lewis is an important part of The Punisher's statements about violence, trauma, and how veterans survive in America.