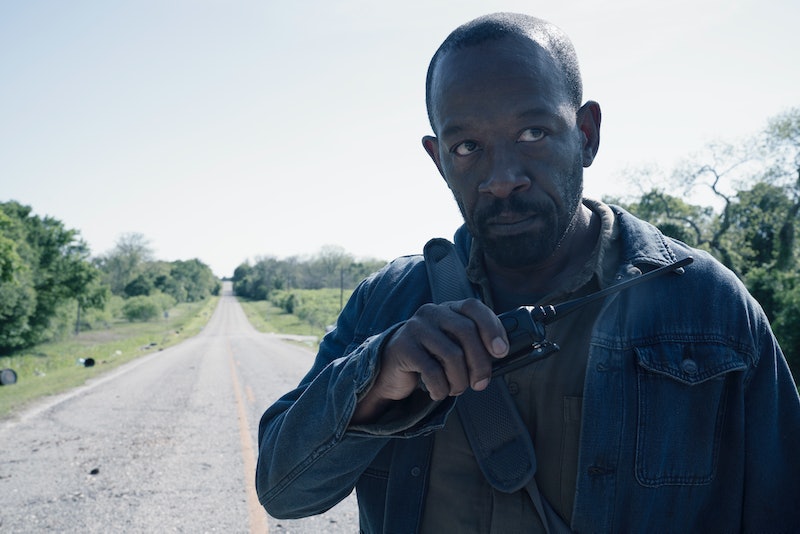 During the storm, Morgan takes refuge in the back of a truck filled with boxes of emergency supplies and wakes up in Mississippi. Abandoned again, he wanders into a truck stop and hears someone calling on a radio.

"That you Polar Bear?" asks this mysterious woman when Morgan encounters her transmission. After he answers, she seems surprised to discover that Morgan is in Mississippi. "Make yourself at home. You know what we say: 'take what you need, leave what you don't.'"

At the end of the episode, the woman on the other end of these radio conversations appears. Played by Tony award winning actor Tonya Pinkins, this mysterious woman has hair in her face, a sinister laugh, and talks to a pinned up Walker she has named "Purvis," telling him that "it looks like we're going to Texas." Creepy! She also writes this group's slogan, "Take what you need and leave what you don't," on Purvis' face. Very chill. Very normal apocalyptic behavior. Very not evil.

She has a map, like the one Morgan found in the Mississippi truck stop, with roads marked off on it. There is also an Amermill beer sign in her office — and there was in the truck stop too. Is Jimbo the quirky brewery man playing coy? His place was called Augie's Ale, but is he connected to this villain? He couldn't have gone on and on about beer in the episode for no reason. Was he really kidnapped for beer recipes? Could be a long shot.

Earlier in the season, when the show returned from hiatus, Althea found one of the supply boxes marked with this slogan while she was recovering with June and John. The trucker twins Morgan encounters are not really part of this mission at all. All they know is that boxes get dropped at mile markers that end in the number four. Until the woman at the other end of the radio appeared, this seemed like an altruistic operation — which, as Morgan notes, is exceedingly rare for this world.

In the trailer for Fear The Walking Dead Season 4B that debuted at San Diego Comic-Con, this character's voice loomed in voiceover. "I know who you really are," she said. "I know what you're really capable of, and I can see it. It's still there." Later, in a trailer shot that shows her face-to-face with Morgan she says, "It is tough out here. You should be careful."

Maybe she uses her supply boxes as breadcrumbs to lure prey. Has she been watching them? Could this woman even be connected to The Walking Dead? There are mysterious radio stations in Virginia as well. Also, what happened to Polar Bear? The trucker twins claim to have left him by the side of the road in Texas. Surely he'll show up later as well. The scariest thing about this new villain is that she's already several steps ahead of our heroes, and they haven't got a clue what's coming.