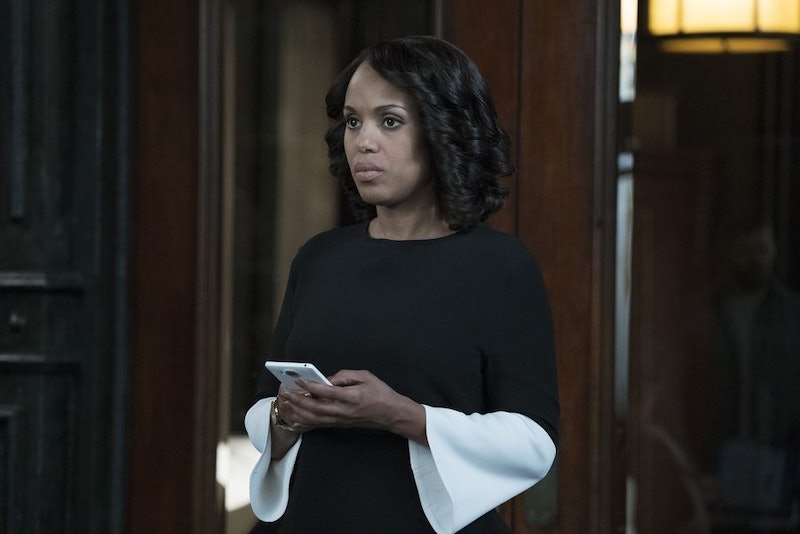 Richard Cartwright/ABC
By Nicole Pomarico
May 12, 2017

There's only one more episode of Scandal Season 6 left, and it definitely seems like the season finale is going to be a big one, especially after the way Thursday night's episode ended. Despite the fact that the White House was able to disable the drones and take out Peus and Samantha, that particular problem isn't solved quite yet. While investigating Samantha, Jake makes a surprising discovery about who's running Peus, and the government's fight may not be won like they thought.

Even though several episodes this season have revolved around Peus' threats, this time, that wasn't true — well, except for the fact that David was carrying around Samantha's severed head in a box, but that's normal, right? It wasn't until he and Abby paid a visit to Jake that they found out exactly how bad things could get. After searching her apartment, Jake not only finds out that Samantha's real name is Gertrude, but he also learns from a device hidden in the walls that she and Peus weren't their own operation — they were working for someone else.

And if they're working for someone else, that person isn't pleased and still poses a danger to the country, especially Mellie — and not knowing who he or she is means that it could be anyone.

But it doesn't stay a mystery for long, because security footage shows Jake the person who entered the apartment while Gertrude was in lockdown in the White House, and it's someone familiar to everyone: Olivia's mom.

Yes, she's back, and whatever her plans are, they're not going to be good for Mellie or the White House. I'm excited to see how this all plays out on the May 18 finale, but it's hard not to feel bad for poor Olivia. Can't she have just one parent who isn't totally shady and evil?