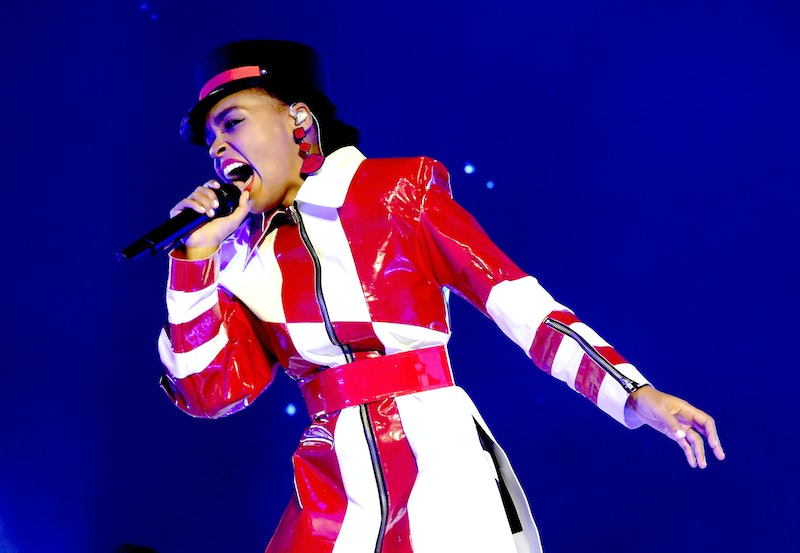 Each year, my Glastonbury predictions become less and less accurate. The ecclectic festival will celebrate its 49th year in June, and in that almost five decade history, it's diversified its line-up, and thrown plenty of curveballs the ticket buyer's way. This year is shaping up to be just as unexpected, with a smattering of iconic, bombastic acts already announced. There's still a helluva lot of poster left to fill, though — including some of the major headlining slots. So, this year, I won't be going off guesswork, so instead, here's everything I know about who's playing Glastonbury Festival 2019.

I never doubted it, but I've also never been more sure of Emily Eavis' (the co-organiser of Glastonbury) exceptionally good taste than when she gleefully announced on BBC 6 Music to Lauren Laverene on Mon, Jan. 7 that Janelle Monáe would be headlining Glastonbury's West Holts Stage this year. Listening back, Eavis confirms to Laverne that the festival organisers are "about 90% of the way there" with the line-up and added that "the last 10% of confirmations are going on now.” So far, a much smaller percentage of acts have been announced, including a couple of legends. The rest of that poster space is really all to play for.

Each year, Glastonbury goers take their guess at who might fill the festival's Legends Slot. Previous years have seen the likes of Dolly Parton, Paul Simon, and Lionel Richie crooning their classics, but as it was announced by The Guardian on Dec. 19, 2018, this year will see the Aussie superstar Kylie Minogue take the slot.

Meanwhile, the first main Pyramid Stage headliner was announced on Nov. 15, 2018, when the festival's official website revealed "Stormzy is confirmed as the first headliner for Glastonbury 2019," adding: "The multi award-winning British MC will headline the Pyramid Stage on Friday, June 28th." He's an ideal headliner, in my opinion, especially when you consider his politically-charged performance at the Brits in 2018. For me, it was one of the most iconic and gratifying live performances from a British act in recent memory, and I can't wait to see what he brings to the Pyramid Stage in June.

So, those are the three confirmed acts, and the rest is probably hearsay. However, speaking to The Sun on Dec. 5, 2018, the Spice Girl's Mel B confirmed: "Glastonbury. It’s been talked about,” but whether that talk has resulted in a slot has yet to be decided. Recruiting Kylie for the legends shot might be proof that Glastonbury is becoming more poptimist, so I'm guessing that a Spice Girls set could follow.

Eavis told NME earlier this year that Paul McCartney was "top on our list," which could be the closest thing to The Beatles headlining Glastonbury. So, watch this space. Other than that, my guess is that — although I say this every year — that this is Taylor Swift's year to headline Glastonbury. Off the back of her Netflix special, I think this will be the apt time for Tay Tay to fill her Glasto blank space.