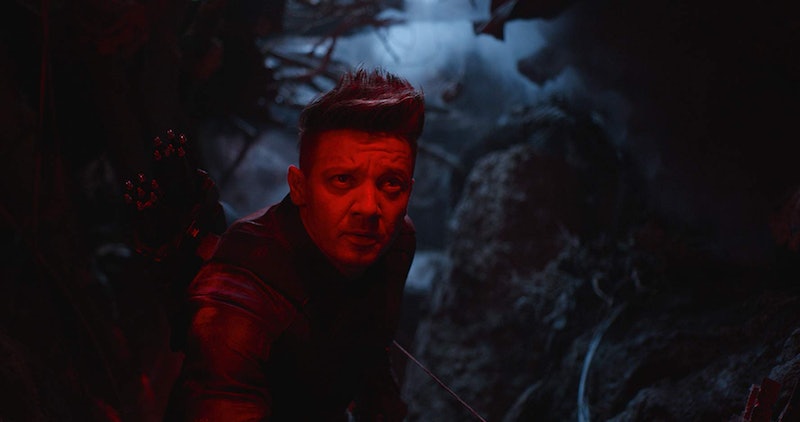 Clint Barton, a.k.a. Hawkeye (Jeremy Renner) totally skipped out on Avengers: Infinity War because he was under house arrest at the time, just like Scott Lang, a.k.a. Ant-Man. But in the official trailer for Marvel's Avengers: Endgame, Barton is back in action, only this time, he's wearing a new black-and-gold look rather than his usual S.H.I.E.L.D.-approved getup and also seems to have taken a darker turn personality-wise. It seems like Hawkeye has returned as Ronin, another identity from Marvel comics.

Not a lot has been revealed about who Ronin is in the grand scheme of the Marvel Cinematic Universe, but more will be revealed when Endgame premieres on April 26. But while Hawkeye is taking on the name in the MCU, in the comics, the sword and nunchuck-wielding, Japanese-influenced fighter isn't exclusively tied to Clint.

Ronin is actually not a singular character, but a mantle. The first character in the comics to use the identity is Maya Lopez, a deaf woman of Native American descent who first calls herself Echo because of her extraordinary capability to perfectly duplicate any physical movement or action she sees after only watching it once. She is one of the hero Daredevil's allies, and later on gets referred to Captain America, so she winds up becoming a member of The New Avengers — Cap's team in the Civil War arc.

The first Ronin dies while stationed in Japan to keep an eye on the evil organization the Hand and their ongoing conflict with the Yakuza. She's assassinated by Elektra Natchios and eventually gets resurrected, but that's a story for another time.

According to IGN, Hawkeye takes up this new persona after the Civil War in the comics. It's Wolverine — who, BTW, does not exist in the MCU for now — who gives him the costume to conceal his own identity, and to allow him to fight as a vigilante without breaking the Sokovia Accords — the piece of legislation that regulates the activities of superhuman beings, specifically those who work with/for S.H.I.E.L.D. and the government. This all happens not only after Echo's death, but also after Hawkeye himself dies at the hands of Scarlet Witch/Wanda Maximoff, who is not quite herself at the time. Scarlet Witch eventually comes to her senses, altering reality and making it so that Barton lives again.

As Ronin in the comics, Barton does tread a darker path for several years, and at some point even tries to murder Scarlet Witch out of revenge. When things get back to normal, however, Hawkeye decides to go his own way.

It seems seriously unlikely that the MCU will follow the graphic novels to a T, given that there are a lot of missing characters and storylines that they'd have to fill us all in with just to make Ronin's appearance in Endgame make sense for readers. But The Hollywood Reporter also recently reported that a new miniseries on the young, new, female Hawkeye Kate Bishop — who becomes Hawkeye after Clint Barton's death — is being developed for Disney's new streaming network. Renner is also expected to make an appearance.

Looks like we'll have to wait and see how the MCU decides to play out this extremely complicated Hawkeye/Ronin timeline. For now, it seems like the Hawkeye we once knew is gone... but maybe not for good.