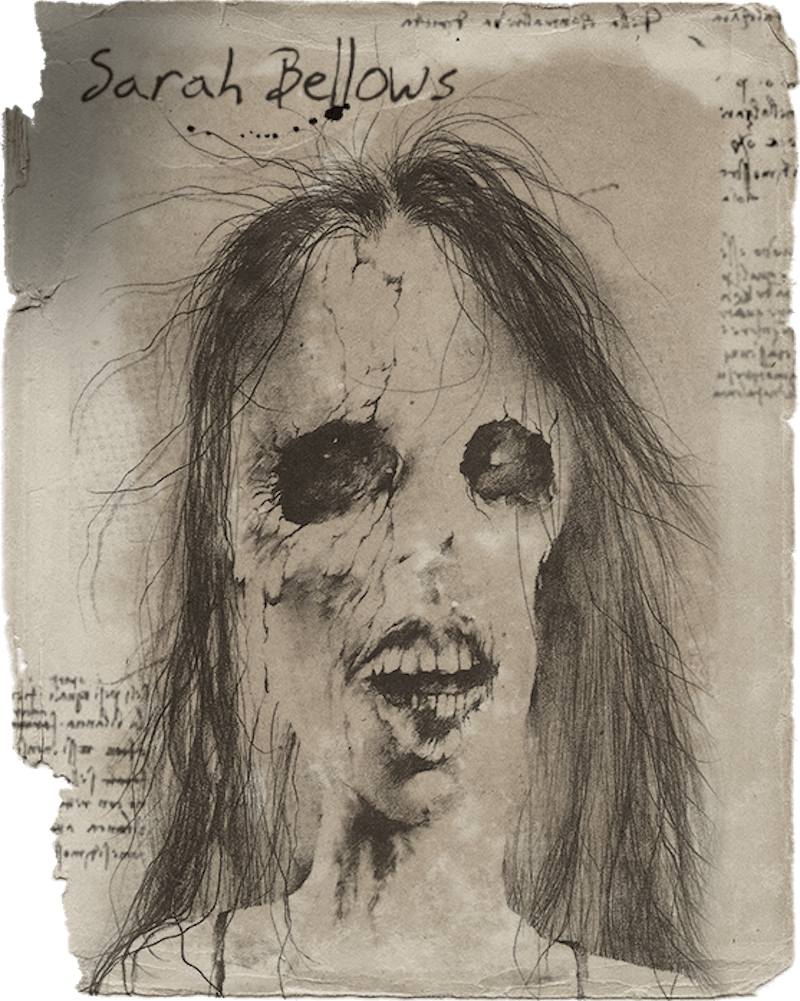 For any '90s kid who is just now getting over their fears related to the terrifying book series Scary Stories to Tell in the Dark: prepare to be re-traumatized. The movie adaptation is almost here, and it's adding a new twist with the character of Sarah Bellows. So who is Sarah in Scary Stories to Tell in the Dark, and what is it about her inclusion that makes the new film possibly even scarier than the books?

In the movie, Sarah Bellows is the originator of the titular stories. She is considered to be a myth in the world of the film, with legends surrounding her spooky upbringing in the small town of Mill Valley's infamous haunted house. But when some kids check out the house looking for a thrill and find her book, they end up discovering that there's more to Sarah than mere legend. Here's Scary Stories' official synopsis, according to Rotten Tomatoes:

It's l968 in America. Change is blowing in the wind... but seemingly far removed from the unrest in the cities is the small town of Mill Valley where for generations, the shadow of the Bellows family has loomed large. It is in their mansion on the edge of town that Sarah, a young girl with horrible secrets, turned her tortured life into a series of scary stories, written in a book that has transcended time--stories that have a way of becoming all too real for a group of teenagers who discover Sarah's terrifying tome.

In the film, Sarah's book contains a number of stories that initially appeared in the book series written by Alvin Schwartz and illustrated by Stephen Gammell. These stories include "The Red Spot," which is about a boil on a girl's face that pops and unleashes hundreds of tiny spiders. "The Big Toe," about a teen who finds a toe and is then stalked by the corpse to whom said toe belongs. "Harold," about a terrifying scarecrow come to life. And "The Dream," about a kid who has a recurring dream featuring a spooky pale woman with black eyes.

The film — or rather, Sarah — is also adding a brand new story that looks to at least be as scary as the ones from the original books. It's called "The Jangly Man" and its titular boogeyman is a composite of several of Gammell's original monster illustrations. He is sewn together from different corpses, and as a result, moves in creepy and disjointed ways.

As for Sarah Bellows herself, she is also contributing some direct scares in the film. Portrayed by Kathleen Pollard, Sarah appears in the film as a ghostly apparition — whose appearance is based on the book's "The Haunted House" illustration — who claims that the town of Mill Valley made her into a monster. As payback, she's wreaking havoc on the town via her all-too-real scary stories.

The addition of Sarah Bellows makes for a convenient and natural way to unite the stories of the Scary Stories to Tell in the Dark books into a cohesive film. So if the books made you sleep with the light on, get ready for your electric bill to soar to new heights after watching Sarah in the movie.