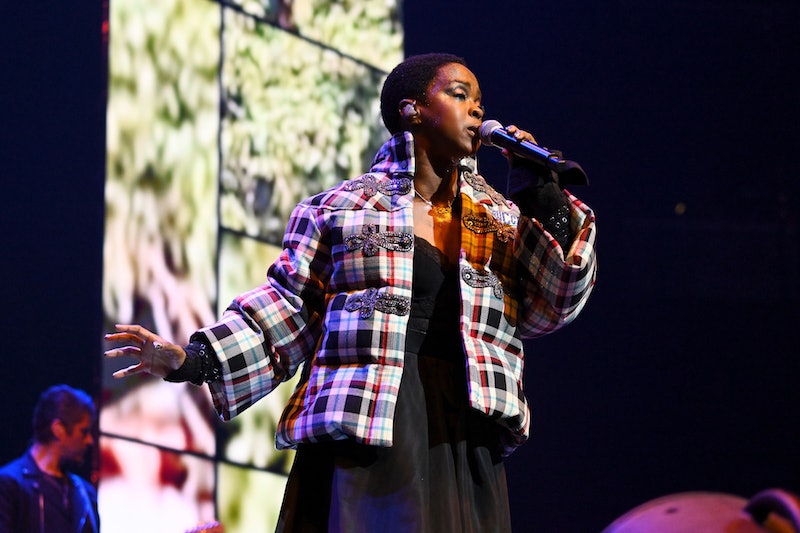 Lauryn Hill (who now likes to be known as Ms. Lauryn Hill) fans must have gone a little wild when it was announced that the singer (and former front woman of Fugees) would be touring the world performing tracks from her album The Miseducation of Lauryn Hill to celebrate its 20th anniversary. Hill's U.S. tour has just come to a close and she arrives in Europe on 15 November ready for her first UK date on 23 November. But who's supporting Lauryn Hill on her UK tour?

Well annoyingly, it's still a little unclear. I've reached out to Hill's reps for comment, but we may have to wait a little longer (if possible, what with her dates right around the corner!) to find out who will be joining her. I'm guessing it'll be worth the wait, though.

Although there's no official word on who will be supporting her, if the line-up is anything like her U.S. tour, it's set to be amazing. Names included Nas, M.I.A., De La Soul, A$AP Rocky, Busta Rhymes, SZA, Big Boi, Santigold, Kelela, and comedian Dave Chappelle, as Exclaim reported. Woah, now that's what you call some A-list action. We have had a hint that Diana Debrito (aka IAMDDB) will be supporting the star on her UK dates, however. Vogue recently referred to the singer's involvement in Hill's tour on their site, sparking intrigue into who else will be coming along for the ride.

Aside from this news, little has been revealed. What we do know is that Hill's European leg of her tour will span across the continent, beginning in Oslo on 15 November, and ending in Stockholm in December. She will also be going to Denmark, The Netherlands, France, and Luxembourg over the course of four weeks. Hill will perform five UK and Ireland dates starting in Glasgow and finishing in London, listed below:

Hill's tour is to celebrate the 20th anniversary of her only solo album outside of Fugees, The Miseducation of Lauryn Hill, which received an incredible 10 Grammy nominations and won five. The record has sold millions of copies over the years. The album's title was inspired by Carter G Woodson's book The Mis-Education of The Negro, along with a film called The Education Of Sonny Carson. Speaking to the Guardian in 2013 about her work, Hill explained:

"The title of the album was meant to discuss those life lessons... those things that you don't get in any text book, things that we go through that force us to mature. Hopefully we learn. Some people get stuck. They say that what doesn't kill us makes us stronger, and these are some really powerful lessons that changed the course and direction of my life."

For more information about Ms. Lauryn Hill's UK tour dates, you can search for tickets and more on Ticketmaster