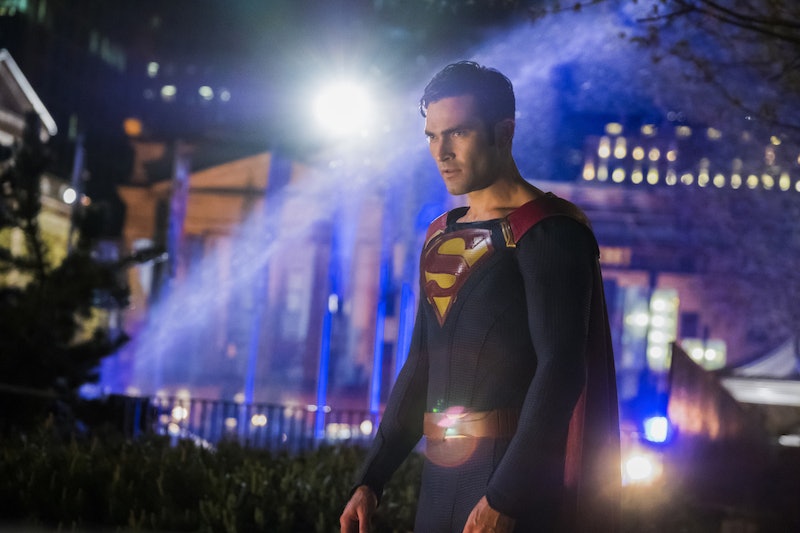 After the sweet sounds of Idina Menzel ended the Supergirl Season 2 finale on a hopeful note, a flashback teased what's coming up next. Thanks to the Phantom Zone, as we learned with Kara, time doesn't always pass in a reliable manner. Who is the baby on Supergirl? Season 3's apparent Big Bad started off just like our heroes.

Turns out that three decades ago, on the last day of Krypton, Kal-El and Kara Zor-El weren't the only children being evacuated. On another corner of the planet, hooded women marked what appeared to be an infant in a pod with red blood, and then sent the pod on its way. This individual was also headed to Earth, where they hooded women thought that "it" would thrive, and then rule the planet. Not only is that ominous, it's also putting a lot of trust in a baby.

Who is this? What hot CW actor will play them? I can't wait to find out. Could it be the Superman villain Doomsday, who was artificially created on Krypton? Because of the nature of their home planet, there aren't a lot of Kryptonians in the comics to choose from, unfortunately. Maybe we're finally going to meet Krypto the Superdog.

This little baby wasn't the only comic book villain teased in the finale. Thanks to the use of silver Kryptonite, Kara appears to Kal-El as General Zod — the infamous Superman adversary was not actually there. However, now that Zod has been cast, he's definitely going to show up for real on Supergirl. Unless that baby was Zod... but that seems unlikely. There was something odd about the way those women talked about the child. It definitely seemed more like an experiment than an offspring.

Meanwhile, Mon-El leaves the planet Earth in a pod, the same way he arrived. Kara is alone yet again. Even though she isn't abandoned by a loved one this time, this still hurts. His vessel is last scene diving into a wormhole. Will he show up next in some other corner of the Arrow-verse, or something? One can only hope.

Either way, Supergirl Season 2 has already set up plenty of intrigue for the next set of episodes. This new arrival is just the beginning.