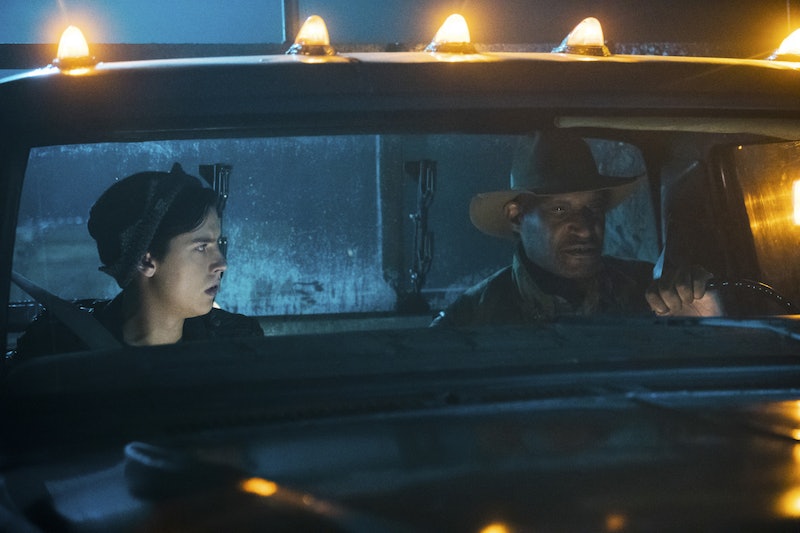 Conspiracies can't stop cropping up on Riverdale. It's almost like this town was never as bright and sunny as it claimed to be. As if the Sugarman and the Black Hood weren't enough, now there's a Reaper on Riverdale. Well, there was, according to a mysterious resident. Who is this new — or rather, old — threat to its citizens? Spoilers!

The Nov. 29 episode, "Tales From The Darkside," uses a bizarre documentary structuring, but that isn't even the strangest thing about the episode. Is the "reaper" the same person as the Black Hood? That's unclear, even though the first time we hear the former name, it's in reference to the killer in contact with Betty Cooper. While running something for the Serpents in Greendale, Jughead hears a radio broadcast refer to the vigilante as a "reaper," and a man giving him a lift says that many people think the murderer is doing God's work by removing sinners from the equation.

"You know what this whole thing reminds me of?" the man asks Jughead next. "The Riverdale Reaper is what. Makes my blood run cold just thinking about it." Jughead, who has been researching serial killers at school, has not heard of this person. The old man later describes the Riverdale Reaper as a "thrill-seeking sicko," and Jughead tries to get more information out of him.

"There was a family living out near Fox Forest," the man said, "Good family. Mother, father, two kids. One night they were all asleep. Someone broke in. The Boogeyman. Went room to room with a shotgun. Shot them all dead. No survivors. Some people say the lynch mob got him. Hung him from a tree near Pickens Park. Others think he hopped a train, went out to California and started praying to the Devil. Others say he never left Riverdale."

So maybe the Reaper and the Black Hood really are the same person, and that person took a long hiatus from killing the people he dubs unclean. "I'm just saying there is a cycle to things," the man tells Jughead. "What happened then is happening now. It's killing season in Riverdale and I wouldn't be surprised if it was the same man."

OK, that connection isn't exactly strong. The Black Hood is specifically after skeletons in closets and "bad people," and this Fox Forest family, according to the drive, were good people. The only thing these two events seem to have in common is murder.

When Jughead tells Archie what he heard, it seems like it makes an impact. At least the spooky idea of the Riverdale Reaper is bringing these two broken friends together. They're hanging out again. Jughead wants to research this potential lead with Archie. This is good.

As for the mystery at hand this season, the man's tale could be another clue. There is no "Riverdale Reaper" in Archie comics, but both Pickens Park and Fox Forest are locations in the canon and in the show. In fact, that house that the Black Hood led Betty to in a previous Riverdale episode was by Fox Forest. Wanna bet it's the same house? That definitely could mean that the two killers are connected, if not the same person.

Maybe the Black Hood was inspired by the Reaper. Maybe the Reaper, like the Sugarman before him, has taken on many different identities over the years. Maybe this creepy Greendale dude who shoots deer, picks up teenage boys, and calls them sinners when they don't pay for his diner fare is the real lead. Her sure spins one heck of a tale. Maybe he knows all about it because he's the man that did it.

Meanwhile, the Snake Charmer is turning out to be a real pain, and Betty is now on the path to proving that Sheriff Keller is the Black Hood, which seems like a bad sign. It's clearly not him now, right? The fact that he's having an affair with the Mayor is dramatic enough.

Jughead may have stumbled upon a creepy clue on Riverdale, but he and his friends are far from out of the woods. This whole situation just gets more dour by the second.

More like this
Michael & Kathleen Peterson’s House From ‘The Staircase’ Has New Owners
By Kadin Burnett and Kayla Blanton
Everything To Know About Marvel's 'Echo' Series On Disney+
By Grace Wehniainen
Will Viewers Revisit Welcome To Eden For Season 2? What To Know
By Kadin Burnett
The Good Doctor Already Added 2 New Cast Members For Season 6
By Brad Witter
Get Even More From Bustle — Sign Up For The Newsletter