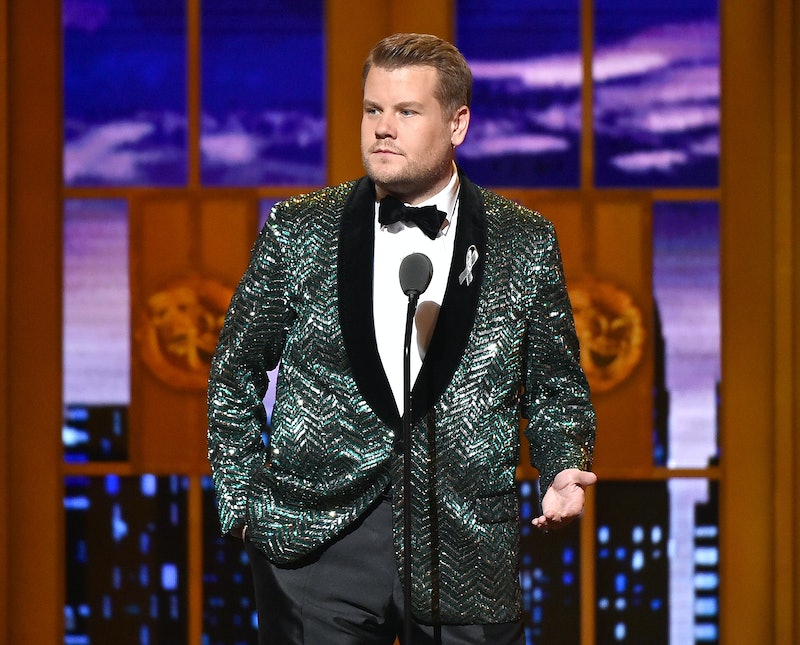 The summer awards season is kicking off with the prestigious Tony Awards on June 9 in New York City, bringing together Broadway's finest to celebrate the best in theater. Of course, every great awards show has to have an awesome emcee at the mic. And luckily, 2019 Tonys host James Corden is the perfect guy for the job.

According to Playbill, Corden will return to the stage for the second time after he successfully led the 2016 Tony awards ceremony and picked up a Tony of his own for performance in the Broadway run of the One Man, Two Guvnors. Anyone who watches The Late Late Show with James Corden knows the London native loves musicals, and he recently spoke to Vulture about how he infuses his show with theater references, such as in the recurring skit "Crosswalk the Musical," which features him and his famous guests singing musical songs in traffic. "I really had fun doing it, and I got the chance to do some acting," Corden said. "It felt like an original idea. It is difficult to have a new idea, and I was like, I haven't seen a version of that on another late-night show. That's what you're searching for."

He also declared that the Tonys is the "absolute best" awards show because of its "warm environment" and the fact that it feels like everyone is rooting for you. "Most award shows are groups of millionaires giving each other gold statues," Corden continued. "Whereas the Tony Awards, these are shows that people are paying hundreds, sometimes thousands of dollars for a ticket. And these incredibly gifted people perform excerpts from these shows in your living room."

That doesn't mean he hasn't enjoyed his other hosting gigs; he just has a favorite. Corden hosted the BRIT awards in 2009 alongside singer Kylie Minogue and English actor Mathew Horne, per NME. He returned to host the BRIT awards from 2011 to 2014, during which time he gained prominence in projects like the aforementioned play that won him a Tony, a small yet unforgettable role on Doctor Who as Craig Owens, and the birth of his famed "Carpool Karaoke" sketch. Honestly, who can forget the iconic moment when he rapped "Get Ya Freak On" with Michelle Obama and Missy Elliott on the White House grounds?

After hosting the 2016 Tonys, Corden was tapped to host the 2017 and 2018 Grammy Awards to bring his British magic to an American audience. The latter featured a particularly funny remix of "Carpool Karaoke" with Corden, Sting, and Shaggy performing on a subway train while New Yorkers told them to shut up. Corden's uncanny ability to vibe with almost any performer and appreciate a wide variety of art is exactly what makes him a good, versatile host.

It's clear that Corden has the wit, creativity, and personality to keep viewers glued to a lengthy (and sometimes boring) awards show. No one knows what the veteran host has up his sleeve for the 2019 Tony Awards, but it's surely going to be entertaining and worth a watch this weekend.