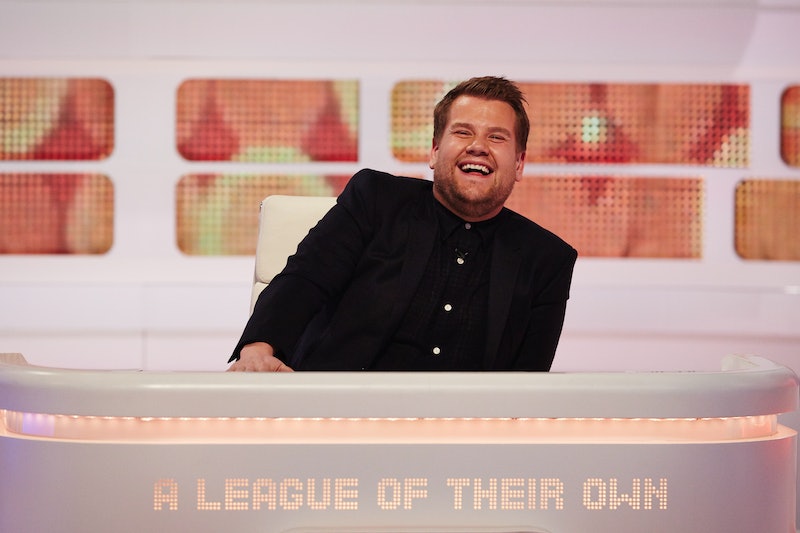 A League Of Their Own is basically A Question of Sport but with a few more beers and giggles thrown in. With James Corden at its helm, the sports quiz show has been testing the sporting knowledge of the country's favourite comedians and athletes ever since its inception in 2010. It's become something of a staple of British TV, but following reports that Corden's role as host is reportedly changing, will A League of Their Own Return for Series 14?

Series 13 is currently in full swing (baseball pun), and it's had the likes of Geri Horner and Rob Beckett making memorable guest appearances, but a spanner was thrown in the works when The Sun reported that Corden would be stepping down as full-time host, after nine years of serving up all the funnies. I can't say that came much of a surprise though. The U.S. seriously loves Corden — and the demand for him there — what with his talk show and other projects, is only ever increasing.

A source told the paper: "James loves A League Of Their Own and has always ensured he’s been able to appear while his career booms in the States." However, they revealed that, "work commitments mean he cannot make all of the shows. Hopefully next year he’ll return to normal as he misses everybody involved.” Those words: "next year" make you think that another series will go ahead after all. Let's hope so.

Back in 2016, Digital Spy reported that the show would be coming back for another three seasons including a 14th. So fingers crossed that's still the case. I have reached out to a representative of Sky for comment on a potential 14th series and I will update you as soon as I hear back. Meanwhile, a representative for Corden returned no comment when asked for confirmation of his role in any potential future series of the show.

Jack Whitehall made a similar departure in 2018, as Digital Spy reported in February of that year that he'd be quitting the show to pursue a bigger career in the U.S. Does that mean that the show's gone to pot, though? Not necessarily. While, according to Premiere Date, Sky One has officially yet to confirm a 14th season, it would be a serious plot twist if A League Of Their Own were to call it a day.

If not for you, then the show's termination would mean heartbreak at least for Jamie Redknapp. According to the Express, the former footballer was hoping to be promoted from team captain to host, as he was revealed to be the most hotly-tipped person for Corden's replacement, should one be needed.

However, according to the bookies, the odds are more in his father's favour. As Betway's Alan Alger told the Express: "The British public have warmed to Harry Redknapp ever since his triumph in the jungle and it would be a massive coup if Sky were able to get him to present A League Of Their Own."

At this point I reckon that if A League Of Their Own does return — which I think it almost certainly will — then it could be an opportunity to boost Harry Redknapp's newfound career as a huge TV personality. In that case, I think there could be a bit of father-son rivalry there, which is exactly what I think British TV quiz shows need more of.