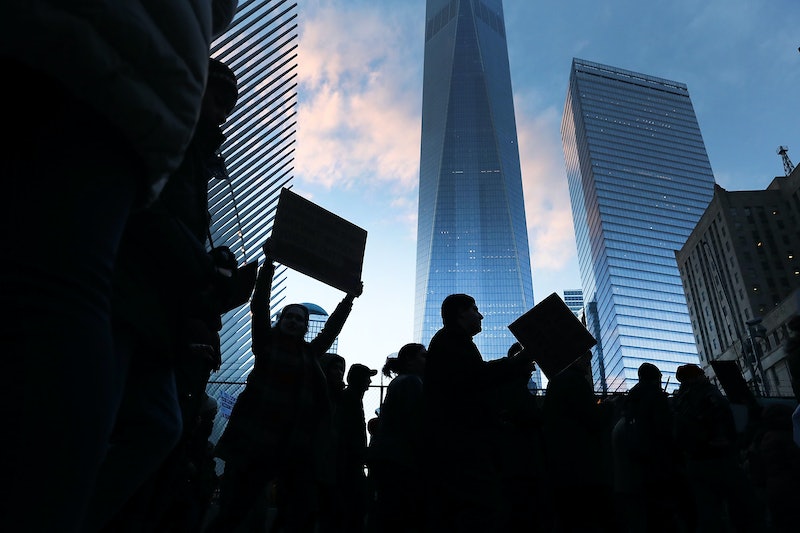 Following President Donald Trump's executive order restricting refugees and immigrants, many groups have voiced their disagreement with the policy. Many flooded airports where refugees with green cards and work visas were being detained to let Trump know that they do not agree with his decision and feel that it will be more harmful to the country than helpful in keeping us safe. Now, families of 9/11 victims are against the refugee ban, and they're speaking out about Trump's executive order.

Within the executive order, Trump repeatedly refers to the attacks of Sept. 11. He has reasoned that the ban will make it more difficult for potential terrorists to enter the country. According to the Huffington Post, members of the group September 11th Families for Peaceful Tomorrows has expressed their displeasure over Trump's attempt to use the attacks as a reason to go forth with the immigration ban. Families for Peaceful Tomorrows was formed in 2002 to oppose the war in Iraq.

The Huffington Post reported that at a press conference Tuesday held by the group, Terry McGovern, who lost her mother, Ann McGovern, on 9/11, said:

Don’t use our loved ones, and especially my mother, to turn away refugees. This is not about protecting Americans. This is about bigotry. I for one am really tired of the exploitation of 9/11 for agendas that have nothing to do with our loved ones.

Obviously, McGovern does not speak for all families whose lives were altered that day, but it's important to listen to her point as well as others who have expressed concern or disagreement with the ban that so clearly references the tragedy.

However, the order does not include the countries where the 9/11 terrorists were from. According to the New York Times, the majority of the hijackers in the various planes were from Saudi Arabia. So, using 9/11 as a talking point and a reason to issue this ban doesn't make sense. It's one thing to introduce an executive order on the pretense of safety, but if your supporting examples don't even apply to the order, why bring it up?

It's clear that the immigration ban has affected people's lives, and created confusion for those who immediately had to implement it. With some 9/11 victims' families speaking out against Trump's order, at least some people will realize that it's not OK to use the tragedy as a means for an action that Trump had wanted to implement for some time.