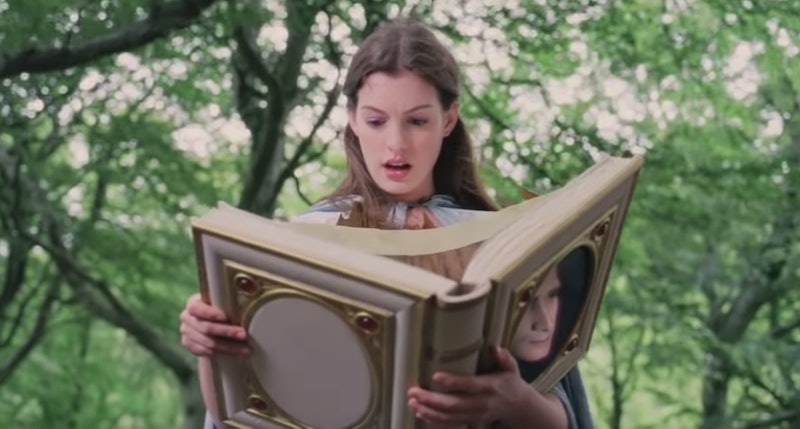 Back in 2004, fresh off her breakout role in The Princess Diaries, Anne Hathaway took the world by storm with another teen classic: the fantasy comedy Ella Enchanted. Based on the award-winning book of the same name, the film starred the actor as Ella, a teen cursed to obey every command thrown her way. Although the movie earned mixed reviews upon its debut, it's remembered by many millennials today as a classic. 15 years after its release, co-producer Jane Startz explains why she thought Hathaway was the perfect pick to play the now-iconic character.

"There was never any thought for anybody else other than Anne. So she was very much my first choice," Startz tells Bustle, speaking over the phone. The producer was first introduced to Hathaway through The Princess Diaries, but it was the actor's performance in a New York production of the musical Carnival! that caught Startz' eye. She loved Hathaway's acting so much, she recalls, that she "dragged" people from Miramax, Ella's distributor, to see Hathaway in the show.

"I thought that she would be the perfect person for it," Startz remembers. "She has this incredible sense of strength and purity and she's got a great sense of humor, she's got great comic timing... she's just a Titanic classic power. She's just a brilliant singer and a brilliant comedian. And she's proven herself over the years to be a really strong dramatic actress as well. She really goes for it, she's very egoless."

In addition to finding Hathaway, Startz also had a say in the casting of the film's other stars. She recalls going to London with Ella's director, Tommy O'Haver, to look for Prince Charmont — Char for short — the naive yet ambitious young prince and soon-to-be king of Lamia. "Every conceivable Prince Charming that you might imagine would have auditioned for that role did," Startz says. It was Hugh Dancy, though, who made the best impression. "He also was totally perfect," the producer recalls. "He is charming and elegant and extremely, extremely smart, and also has a wonderful sense of humor."

After a chemistry reading with Hathaway in which the duo "really clicked," Dancy was cast. But then there was the matter of the rest of the ensemble. "We dug very, very deeply to find just the right people for each role," recalls Startz. The team ended up casting the "so funny" Joanna Lumley as the wicked stepmother and "comic genius" Lucy Punch as stepsister Hattie, as well as Vivica A. Fox as Lucinda, Steve Coogan as Heston the snake, Minnie Driver as Mandy the house fairy, and even Heidi Klum as the giant who falls in love with Slannen. "It's a very eclectic cast," Startz says now, "And I think everybody was great in their roles."

Together, Ella's cast brought some of the movie's best moments to life, from the boy-band-like fervor of Char's fans to Lucinda's wacky antics to the abrupt stance Ella takes whenever she fulfills a command. And who could forget Hathaway's performance of Queen's "Somebody To Love" at the wedding in Giantville? "Her songs are amazing, her songs are incredible," Startz recalls. "'Somebody To Love' is just amazing, what can you say? I think that may be my favorite moment — it just is brilliant, totally brilliant."

For Startz, bringing Ella to life was relatively easy; as the former co-founder and executive vice president of Scholastic Productions, she was practically made for adaptations. By the time Ella entered production in August 2002, Startz had already adapted over 200 books, including both the TV series and film of The Baby-Sitters Club, the series for Harold and the Purple Crayon, and the movie Tuck Everlasting. With Ella, the fact that she was already friends with author Gail Carson Levine didn't add pressure, just made it clear why the story was so important. "I feel that part of my responsibility, in addition to making a really good movie, is really honoring the source material," Startz says now. "The book is very much an icon."

Of course, some things from the novel were changed for the movie (for one thing, the studio wanted Ella to be older so her love story could be more substantial, says Startz), but overall, the people involved in both versions were happy with the result. "We really just had a really great time," says Startz. "There was a really amazing sense of camaraderie and a real sense of family.. I think part of the reason why that movie did become a classic is because there's a real sense of joy to it. Joy and discovery that's very, very genuine."

Fifteen years after Ella, Startz is busy working on several new projects, including a Netflix adaptation of the fantasy book School For Good And Evil, another fantasy Netflix project called Goddess Girls about teens, and a Disney vehicle called Roller Girls. "All my projects, when I think about it, are stories of empowerment, and most of them are about young women," Startz notes. "A couple of guys sneak in, but it's usually about girls finding their way and finding their voice."

Just like Ella Enchanted — which also revolves around the idea of hope, another theme Startz says she gravitates to when picking work. "That's the common denominator that shows young people getting through a hard time and coming out on the other side and really discovering who they are," she explains.

In Ella Enchanted, Ella is in a dire situation; there's no "cure" for her "gift" of being forced to obey commands, she's falling for a man who she doesn't allow herself to see a future with, her mother is dead, and her father has forced her to live with three mean-spirited women. She seems like she should be without the capacity to hope anymore, yet the movie makes clear that even in the darkest and bleakest situations, you can come out the other side — an inspiring story that Startz, for one, is proud to have helped bring to the big screen.