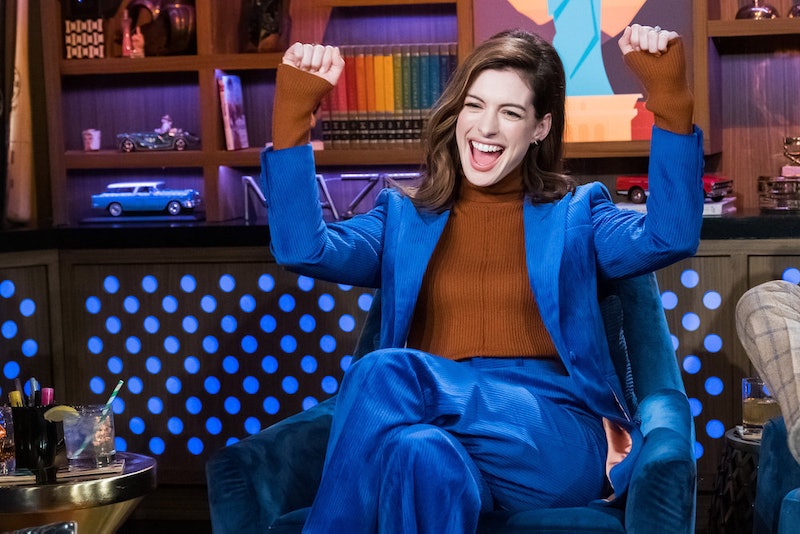 While it has been rumored to be happening for years, so much so that you might have given up all hope, Anne Hathaway just confirmed that The Princess Diaries 3 dream is alive and well. During an appearance on Watch What Happens Live with Andy Cohen, Hathaway gave an update on The Princess Diaries 3 that sounded quite promising. Loyal subjects of Genovia probably already know that a Princess Diaries 3 script exists. But Hathaway confirmed again that she and Julie Andrews are still down to bring back their beloved characters, so there's likely to be a third Princess Diaries in the future.

On Thursday, Hathaway was joined by her Serenity costar Matthew McConaughey on Andy Cohen's show. A caller asked Mia Thermopolis herself if there were any updates on the third movie since the author of the Princess Diaries books, Meg Cabot, revealed to Entertainment Weekly back in 2017 that a script for it existed. "There is a script for a third movie," Hathaway confirmed before giving a bit more details.

Fans of Mia's journey from regular high school student to royalty have been teased about a third installment for years now. It's been about 18 years since the first movie came out and 15 years since Mia became queen in The Princess Diaries 2. The director of both movies, Garry Marshall, told People in March 2016 that he and Hathaway were planning to make the third movie eventually. (She was pregnant with her son Jonathan at the time.) Marshall passed away later that year, but Andrews confirmed to BuzzFeed in March 2017 that she would "very willingly and happily do" a third movie and that Hathaway was "very keen" as well. Andrews also noted that the third movie would likely honor the legendary director.

The last major update came courtesy of Cabot, who spoke about the script in July 2017. So to know that Andrews, Hathaway, and the producers are still interested and want to do it right is pretty major. The only downside is that Hathaway made no mention of Chris Pine's involvement, which may mean that Mia and Nicholas Deveraux will no longer be together in Princess Diaries 3. But at least Mia will have her grandmother by her side still.

During the interview, Cohen also asked McConaughey if he's seen The Princess Diaries. And to Hathaway's surprise, her Interstellar and Serenity costar said that he had — although his viewing experience was a bit delayed. "I didn't see it before we met," McConaughey admitted. But he then noted how his 9-year-old daughter Vida is a fan. "Vida loves it and loves you, and I've seen it many, many, many times," he said.

When Cohen asked Hathaway how she felt when she first met Andrews, Hathaway replied, "I was worried I'd puke on her shoes." But clearly, they've come a long way since then. And these women are ready to reprise their Princess Diaries roles once again. So even though Andrews didn't pop in Mary Poppins Returns and Hathaway has a pretty busy work schedule coming up, prepare yourself to see the Genovian royalty to reign supreme once again someday (hopefully) soon.

More like this
Margot Robbie Breaks Her Silence On *That* Viral 'Barbie' Moment
By Maxine Harrison
Paul Mescal, Man Of Mystery
By Samantha Leach and Heather Hazzan
Olivia Wilde Addresses *Those* Florence Pugh & Shia LaBeouf Rumours
By El Hunt and Sam Ramsden
Here’s Everything Coming To & Leaving Netflix In October
By Jake Viswanath
Get Even More From Bustle — Sign Up For The Newsletter