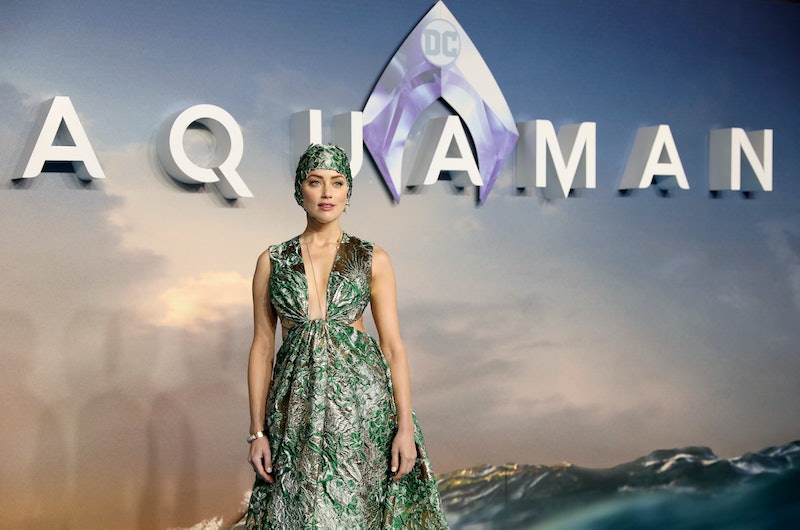 The DC Extended Universe needs more women representing onscreen, and they're working on it. Aquaman proves that, as Mera (Amber Heard) is not only the second lead, but a complicated hero well up to the challenge of saving the world. The actor is all for bringing more women into the cinematic superhero world, but there's one question she's already sick of being asked about her character.

"Some journalists have sat down and asked me, 'Who would win?' like trying to pit us in a competition — 'You or Wonder Woman?'" Heard says when we sit down at the Four Seasons in New York City. "I was like, 'First of all, there's a reason you could just think of one [other] person.'"

Fans may go to these kinds of movies, in part, to watch characters punch each other, but it's so boring to assume that the only two female heroes in the franchise would be in conflict, especially since they're the only two women — at least, for now. The thought experiment takes on a different meaning here than it has when, for example, Batman and Superman are pitted against each other. Because there are so many male characters in this genre, they get to just be many examples superheroes, whereas Mera and Diana (Gal Gadot) are grouped together in the minority as female superheroes.

What I actually want to know is what Wonder Woman and Mera would talk about, not fight over. Would they compare notes on their regal upbringings? Would they help each other navigate the human world that's foreign to both of them? As an Atlantean, Mera's still figuring out how air works!

"I'd be interested in seeing them team up," Heard says. Themyscira's an island — so they could easily meet. "Because where one is... Mera, her world's underneath. Under the sea. For the most part, covered in water. But Wonder Woman's one hell of a badass on land. Land and land adjacent, two badass women like that would have a lot to talk about. None of which would have anything to do with their love lives."

With the release of Wonder Woman in 2017, the DCEU pushed ahead of the Marvel Cinematic Universe by releasing a standalone superhero film centered around a female lead. (Captain Marvel will be the other studio's first.) But Diana and Mera are still the only two female DC supers — not counting the antiheroes of Suicide Squad. The MCU is still far from equality goals, but in 2018, it has at least three times the number of female superheroes in its roundup.

"There's plenty of room for more than just two," Heard says. Fortunately, the release of the DCEU's Birds Of Prey (And The Fantabulous Emancipation of One Harley Quinn) in 2020 and ultimately Batgirl, which is still in want of a director, will add to their numbers.

But it's not enough to put women on screen in their own vehicles — it's necessary to include complicated, well-drawn women in films with titular male heroes as well. Mera, a rebellious undersea royal, is unlike any character you've seen in a DC movie so far. As she expresses her views about how human beings are treating the ocean — not well, to put it mildly — it almost sounds as if she's setting herself up as an antagonist. She doesn't agree with everything that Arthur does or that humans in general do, but the audience sees her make a choice and start on a journey of her own to put a stop to a budding war between land and sea.

"I hope people are, and I'm, inspired and encouraged by her strength and her determination to do what's right," Heard says, "despite what personal sacrifices that may entail. Her kind of innate sense of right and wrong, and her strong determination to execute her will, and her agency and her autonomy and her independence."

Mera's never weak in a damsel way, but as an outsider, she does genuinely have to adjust to the surface world. She (for example) eats flowers, a mistake that honestly any of us might have made if we grew up in the water.

"I really felt [her] when I found myself — an adult woman age 30-something years old — quite literally taking whole bites out of real roses," says Heard. "I'm a grown-ass woman, and I'm fishing rose pedals out of my teeth."

Insert "fish out of water" joke here, she says. With luck, as more and more female characters make their way to the big screen, women won't feel like fishes out of water in the DCEU either.