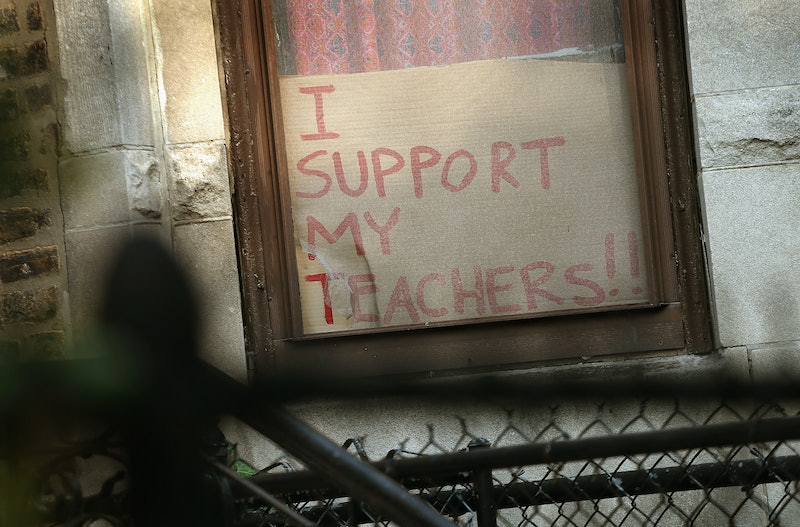 In the latest of a series of teachers' strikes across the country, Denver, Colorado teachers won't attend their schools on Monday in an effort to improve work conditions. In this case, the reason why Denver teachers are striking is a pretty straightforward one: they're not consistently paid enough to keep up with the rising costs of life in the popular city.

Teachers in Denver have found that their base salary isn't enough to give them sufficient financial security, causing them to make some pretty tough choices regarding money, as CNN reported. Their strike could impact up to 92,000 students in all of the public schools in Colorado's capital.

"We're not asking for a million dollars," physical education teacher Sean Bowers, who supplements his income by driving for Lyft, told CNN. "We're asking for an extra $200 to $300 per paycheck so that I can save up so that I can buy a house and live in my community and not jump from house to house."

The Denver Classroom Teachers Association, the union representing the teachers, has been in talks with the city's school system in an attempt to raise the teachers' salaries, according to USA Today. When the school system didn't give the union a suitable offer, the union called for a strike — which means that on Monday, Denver's schoolchildren will be walking into an unusual situation.

Besides public preschool classrooms, Denver's school system is keeping the schools open by bringing in extra substitute teachers, according to The Hill. Even with the 1,200 substitutes that the district already has plus an extra 300 to cover during the strike, though, up to 5,000 teachers could be striking — which leaves schools in a tricky situation, as CNN wrote. According to Denver's ABC News station, schools will plan on staying open, but the district would be assessing the situation daily to keep parents and students updated on whether keeping each school open for the next day is feasible.

It's unclear how long the strike will go on, but the central issue of the Denver teachers' strike is teachers' base pay, according to the Huffington Post. As it is right now, teachers in certain situations — like those who teach in high-poverty schools, for example — get bonuses depending on their students' results and other factors that aren't under the teachers' control, which the school system claims is necessary to help the students' performance.

Teachers, however, would rather have higher base salaries, because they say that they can't depend on the bonuses, as CNN reported.

"You can't bank anything on what you're going to make each year because they have these little bonuses that come and go," Kelsey Brown, a Denver Spanish teacher, told CNN. "Two years ago, I made more than I'm making now."

The unfavorable pay situation has led to a very high turnover rate, as The Guardian wrote. So now, Denver's teachers are striking to put an end to that and make the city a better place for teachers to work. And if this strike follows the general trend of teachers strikes recently, the teachers are likely to walk out with an improved situation.