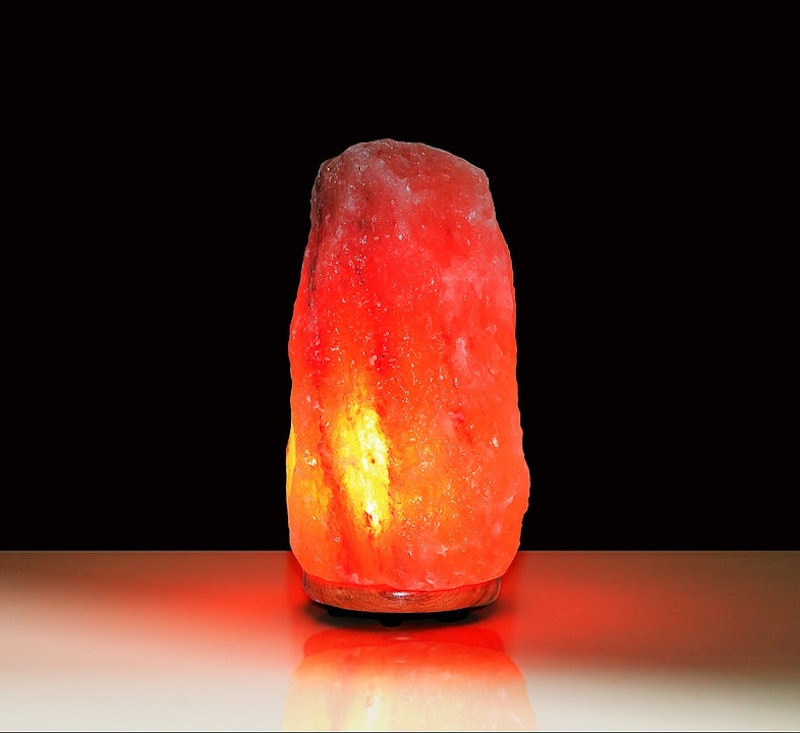 Recently, the internet lit itself on figurative fire after discovering that thousands of Himalayan rock salt lamps have been recalled from Michael's stores for being literal, not-at-all figurative potential fire and shock risks. The CPSC announced the recall, which includes products manufactured by the brand Lumiere between August 2016 and November 2016. While a lot of people are now on their way to Michaels to collect refunds, many of us left out of the loop are probably wondering: why are Himalayan rock salt lamps good for you? Why does it seem like everybody's roommate, sister, and fun aunt suddenly owns one of these for the sake of its "health benefits"?

"Working together with the CPSC, we have recalled the line of Lumière Himalayan Salt Lamps sold between July 2016 and November 2016," a Michaels spokesperson tells Bustle in a statement. "The safety and well-being of our customers is our top priority and we have taken immediate steps to remove this product from our stores, inventories, and supply chain. We apologize to anyone who have been affected by this situation and are providing full refunds."

As it turns out, Himalayan rock salt lamps have gained popularity in the past year or so for two reasons: one being that they are, admittedly, super fly looking, and the other that there are supposedly health benefits involved with salt lamps. A lot of information touted about rock salt lamps on the internet claim that the ionize and cleanse the air, easing breathing issues like asthma and coughing, and help energize and promote restful sleep in the room where they are powered. It is important to note, however, that none of this has been scientifically-backed or proven.

So what exactly are Himalayan rock salt lamps, anyway? If you've seen one, you know they are very distinct for their pink-orangeish hue, which is a result of the concentrated salt in the crystal used at the base for the light. The salt is often hand-carved, and a light is put inside, with a wooden or metal base. Whether or not their health benefits are legitimate is still up in the (possibly cleansed, possibly not) air, but they are decidedly pretty to look at — and there is something to be said for the psychology of positive thinking, which may lead people to believe that the lamp has effects even if it doesn't.

Regardless, if you think your rock salt lamp may have been affected by the recall, you can seek a full refund at Michaels, or read more about the specifically recalled products on the CPSC's announcement here.