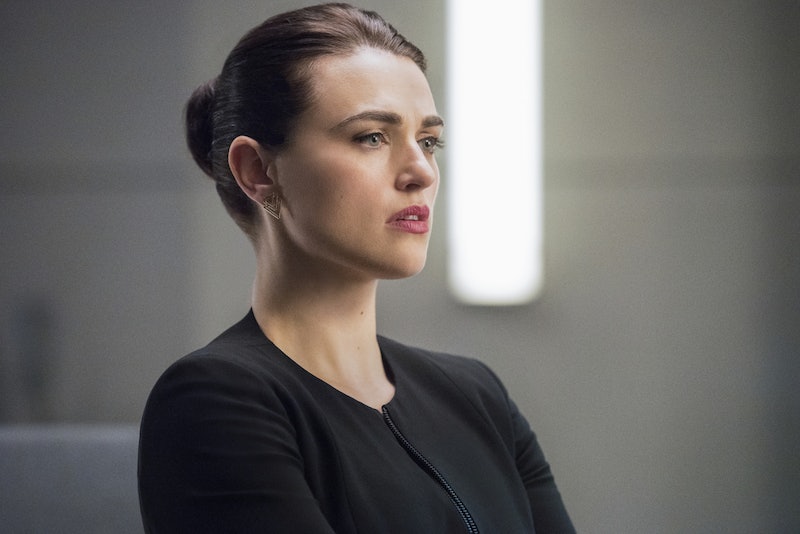 Just as soon as I thought Lena Luthor was too smart to fall prey to Mama Daxam's charms, she surprises me yet again. It's impossible to get a read on her. Despite the many red flags, Lena and Rhea team up on Supergirl. Lena knows Rhea's true identity, but seems ready to do business anyway.

Rhea starts to court Lena's business by pretending to be human, but that plan falls flat pretty quickly. Lena shrewdly discovers that her new colleague is an alien, and so Rhea has to appeal to the family drama part of Ms. Luthor.

What's really going on here? I feel like this tech deal can't be the whole reason why Lena agreed to work with the Daxam Queen. Is Lena taking a double agent approach? Does she realize that the girlfriend that Rhea describes is her BFF Kara? Is Lena trying to get rid of Mon-El too? Maybe she wants Kara to herself and is willing to go to extreme measures. It is suspicious that she calls Kara to set up brunch plans with Rhea in the room. Smells like a sting operation. On the other hand, maybe Lena Luthor really is willing to follow anyone who doesn't presume her to be exactly like her family.

Also, what the heck is Rhea trying to build — a portal? A teleportation center? Doesn't she have a spaceship? I wonder if this is going to lead to some sort of political mass deportation movement. Supergirl has not been subtle about turning alien storylines into metaphors about immigration, sexuality, and the different ways that we "other" people in our own society.

Lena's mother would certainly like that, which is what concerns me the most about Supergirl. As much as I want to believe that Lena is two steps ahead of everybody, the stars are converging in a concerning way. If she really is good, and I sure as Daxam hope she is, then she's going to have to prove it soon. Allies like Queen Rhea are not helping her case.