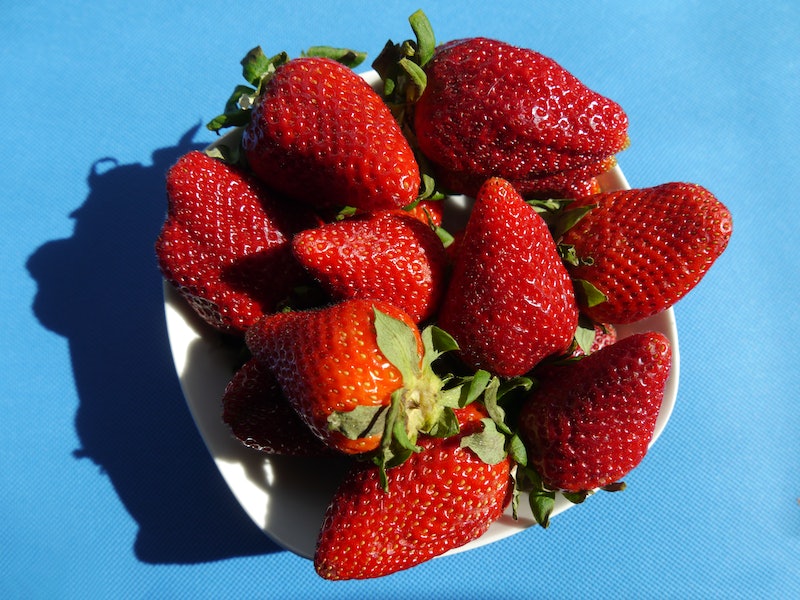 If you've been seeing random cherry, pineapple, and banana emojis appear where you used to just see selfies of your friends wearing cartoon dog ears, you're probably wondering what does fruit on Snapchat stories mean? It's nothing sinister, but it is a little strange — people have been posting different fruit to indicate their relationship status. Back in ~my~ day all it took was an “it’s complicated” relationship status update on Facebook to get people talking, but apparently today’s youths find more joy encrypting their messages with emojis they’d probably never use otherwise.

The Snapchat fruit "game" originally started shortly after Christmas 2016, according to Wojdylo Social Media, and is done by girls who are looking to "confuse guys" (and the rest of the world) about whether or not they are single, dating someone, or currently not looking. The rules, it seems, are pretty simple: Reference the state of your love life using a specific "flavor." Single AF? Post "blueberry." In a relationship? Post a cherry. Lemons mean you want to be single, raspberries mean you can't commit, and pineapples mean it's complicated. Here's the full breakdown, according to Wojdylo:

It's unclear who exactly started the Snapchat fruit game —or why it resurfaced again in April 2020 — but whoever it was, their plan is working. People are really freaking confused. There's even an entire Reddit thread dedicated to trying to figure out what each of the mysterious Snapchat fruit mean; Reddit user marimbruhh pointed puzzled decoders to this Imgur post, which shows a Snapchat post going viral telling girls to participate:

Personally, I've never known how to work fruit emojis into my everyday interactions, so thank you, teens, for teaching me this very important method of communication. But apparently this game doesn't stop at fruit. According to Reddit, it's also opened up to include animals too — pandas mean you're single, birds mean you like someone — now that more and more people are catching on to the meanings behind each fruit.

For the less well-versed, though, the fruit game is just kind of strange. Of course, you could just say "I'm seeing someone" to make your relationship status known, but that seems so extra when you could just post a... fruit. For what it's worth, I'm a pineapple-raspberry hybrid who occasionally identifies as cherry, depending on what kind of mood you get me in. I guess this is more complicated than I thought after all.

More like this
8 Completely Unserious Tips To Make Your Cuffing Season A Success
By Ginny Hogan
Behind The Hilarity Of The "POV: You Walk Into My Room" TikTok Trend
By Lexi Inks
Why TikTok Is Flooded With Controversial Videos About "Pick Me Girls"
By Courtney Young
This TikTok Song About An Unrequited Romance Has FYPs In Shambles
By Emma Carey
Get Even More From Bustle — Sign Up For The Newsletter

This article was originally published on Dec. 30, 2016