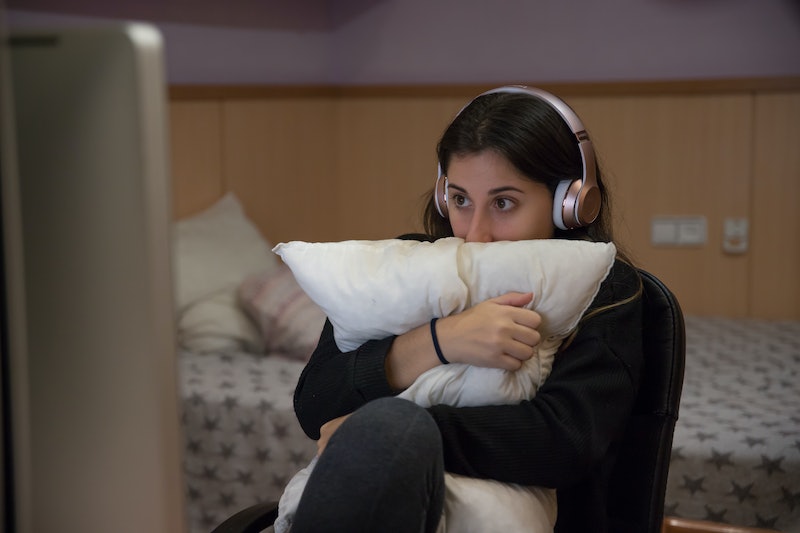 Scroll through Netflix on any given night and you'll be treated to a host of true crime stories, all equally scintillating, from films on Ted Bundy to ripped-from-the-headlines series like The Act. However, people have always been obsessed with true crime. In the 1400s, after moveable type was invented, the European public devoured hugely popular "murder pamphlets," cheap, tabloid-style pages that told crime stories ripped from the headlines. Since then, true crime has only become more popular, and you're just as likely to read about it in a longform piece by The Washington Post or see it on Twitter. It's one of the most enduring public fascinations — and our human obsession with it, experts tell Bustle, reveals a lot about our empathy, our love of narrative, and our drive to survive.

Part of our love for true crime is based on something very natural: curiosity. People reading or watching a true crime story, forensic psychologist Dr. Katherine Ramsland, PhD, a professor at De Sales University, tells Bustle, are engaged on several levels. "They're curious about who would do this — they want to know the psychology of the bad guy, girl or team," she says. "They want to know something about the abhorrent mind. They also love the puzzle — figuring out how it was done." This curiosity may seem odd when it involves violence, threat or serious danger, but, experts tell Bustle, that's actually part of the point.

"I believe we've evolved to pay immediate and close attention to that which can harm us," Dr. Marissa Harrison, PhD, an associate professor of psychology at Penn State Harrisburg, tells Bustle. "It seems we want to learn all the details, no matter how disturbing. I've reviewed serial killer cases with my students, and they want to hear all the details. Then, they literally shout and cringe."

The impulse behind that morbid curiosity isn't all that morbid: it may be an evolutionary tactic to help us survive. "Curiosity motivates us from a survival drive," explains Dr. Harrison. "When we learn about, and understand, lethal phenomena, we can hopefully avoid it." Something in your brain wants to understand true crime on an educational level: if you were in the same situation, what would you do, and how would you get out unscathed?

This evolutionary dimension may, say some studies, be particularly pronounced in women. Dr. Amanda Vicary, PhD, an associate professor of psychology at Illinois Wesleyan University, has done research that indicates women are more drawn to true crime than men. The reason, she says, is likely to do with our drive to survive. Stories that appeal to women, according to her research, tend to have details like survival or escape techniques and feature female rather than male victims. "If you look at what these components have in common, you'll see that they are all related to survival," she tells Bustle. "Essentially, women may be reading these stories because they are scared of being the victim of a crime and through these stories they can learn the signs to look for in a potential killer or learn tips on how to survive if being kidnapped or attacked." True crime stories can also reflect the issues and problems facing women at the time they were committed; Lorena Bobitt's case, for instance, was sensationalized for its salacious aspects, but the fact that she was a victim of domestic violence basically ignored until the Amazon documentary Lorena revisited the case in 2019.

Beyond education, there are other elements of true crime that appeal to our psychological fancy. Dr. Ramsland says emotion is a big part of the appeal of true crime stories. Reading or seeing them, she tells Bustle, "stimulates empathy for victims, outrage at what has happened to them, rage at the perpetrators, and a sense of thrill sometimes if the challenge of the investigation and the suspense is very high. At the end they feel a sense of relief that there's been a resolution, someone's been punished and perhaps someone has survived." You go on a rollercoaster of emotions, with true crime without ever truly risking anything. It's rather like going to see a scary movie; Dr. Harrison notes that for some people, there's "sympathetic nervous system activation from exposure to frightening concepts and events. Many people like the physical feeling of being scared."

Psychologist Emma Kenny, a specialist on true crime, points out another element of true crime: it reassures us of our own empathy. "It's something that makes us feel more human: our ability to realize that we're very disassociated from the ways another person could act in volatile or aggressive situations," she tells Bustle. "That helps us connect to our own empathy. We feel very different to people who commit those crimes, so it reassures us." The fact that we can empathetically connect to victims but not to criminals, she says, helps reinforce our belief that we're good people.

The real problem with true crime, Dr. Ramsland says, is that sometimes people can use it to help their own criminal ambitions. "We've certainly had people who've studied forensic files looking for a way to commit a crime and get away with it," she tells Bustle. The phenomenon, known as copycat crime, can show up in situations where a crime is highly publicized.

However, being extremely invested in true crime stories purely for the psychological thrill can be detrimental. "Anything can become obsession," says Dr. Ramsland. The amount of media discussion about films on figures like Ted Bundy and Charles Manson, both of whom have recently featured in high-profile releases — Manson in Quentin Tarantino's Once Upon A Time In Hollywood and Bundy played by Zac Efron in Extremely Wicked, Shockingly Evil And Vile — shows that true crime stories can also make us uncomfortable if they're believed to glamorize or excuse serious crimes.

Watching or reading about true crime links us back to a tradition that's at least 500 years old — and it's not harmful in moderation. Stream that new documentary in the knowledge that you're likely indulging a pretty common psychological urge, and educating yourself for later.

More like this
How To Protect Your Digital Privacy If You Need An Abortion Post-Roe
By Kaitlyn Wylde
How Getting An Abortion Has Changed From The ’60s Through Today
By Amanda Chatel
The UK Abortion Laws In 2022, Explained
By Sophie McEvoy
6 Abortion Advocates To Follow On TikTok
By Sara Youngblood Gregory
Get Even More From Bustle — Sign Up For The Newsletter