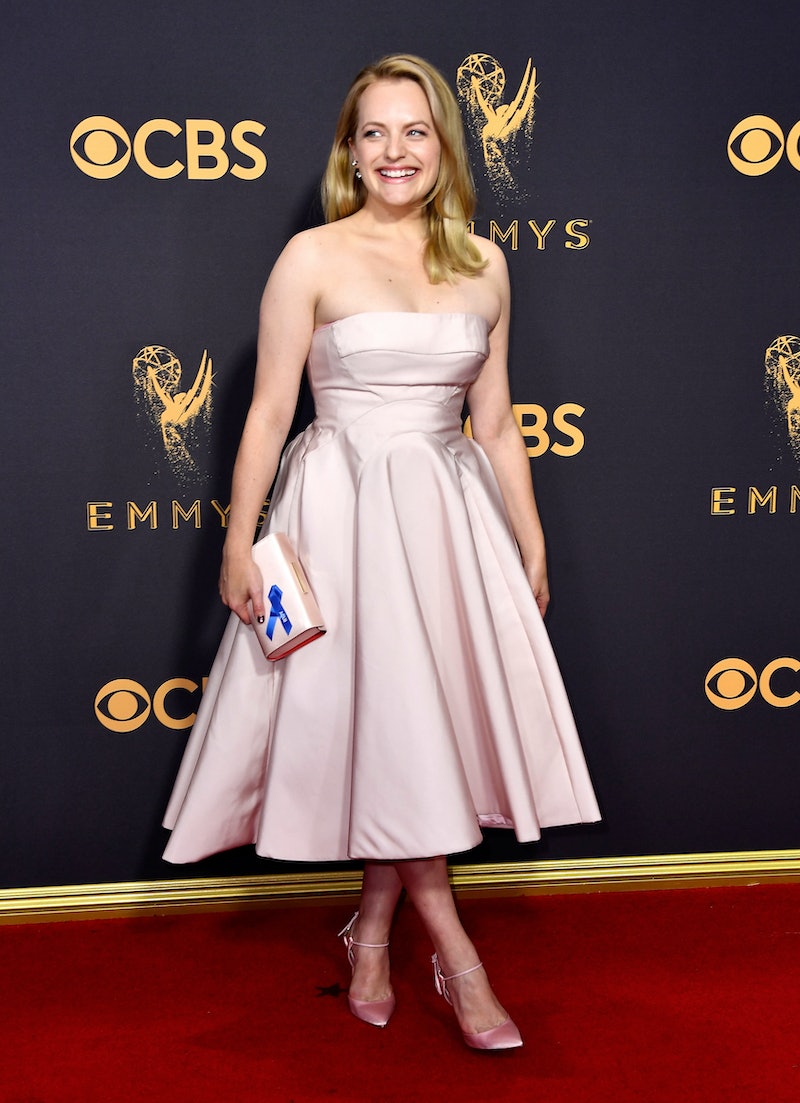 All of the awards shows in 2017, from the Oscars to the Golden Globes to the Tonys to the VMAs, have been about much more than Hollywood's elite celebrating professional achievements. Celebs have been wearing blue ACLU ribbons with their couture outfits at these ceremonies to make a statement about human rights — and the 2017 Emmys are no different.

The Emmys are just another amazing instance of stars using these highly publicized events as a platform to call attention to crucial issues that affect us all, especially people of marginalized identities.

The blue ribbons advance an important message that makes them just as beautiful — if not more beautiful— than the diamond necklaces, earrings, and bracelets that drip from the necks, ears, and arms of those who walk the red carpet.

The blue ACLU ribbons, which were worn by everyone from actor Elisabeth Moss to Top Chef host Padma Lakshmi and more, show support of the "Stand With ACLU" initiative. According to The Hollywood Reporter, this particular program encourages Hollywood's elite to wear the ribbon to award shows as a sign solidarity with the organization, which works tirelessly "to defend and preserve the individual rights and liberties guaranteed by the Constitution and laws of the United States."

We cannot underestimate the importance or the value of the ACLU's work, especially in this social and political climate. Celebs are making the ACLU's efforts even more visible by proudly sporting the nonprofit on the red carpet. Here's all the celebs making a statement on the Emmys red carpet.

Lakshmi paired her hot pink gown, which boasted a fishtail silhouette, with the blue ribbon affixed to her hip. The placement of the ribbon certainly made it impossible to ignore.

The always hilarious actor added the blue ribbon to her strapless black and polka dot column frock and it was the only accessory she needed.

Silicon Valley star Kumail Nanjiani and his writer/producer/podcast host wife Emily V. Gordon both proudly displayed their blue ribbons. The couple that accessorizes together, stays together.

Former Who's the Boss and current Transparent star Judith Light had a va-va-voom moment with her long-sleeved black dress, which featured a slit that showed off her leg for days a la Angelina Jolie at the 2012 Academy Awards. Light's blue ribbon was exactly the touch she needed to top off her gown.

The actor wore a black pantsuit with gold accessories, but the blue one was the best.

The Handmaid's Tale star added her blue ribbon to her pink clutch, which matched her strapless, millennial pink frock. The pop of blue broke up her all blush look with a bold statement.

The Blackish actor added just the right flash of color to his white tux jacket. The accessory was predictable coming from the lead actor on a show about race and black culture.

Writer and actor Riz Ahmed dressed up the lapel of his black tux with the statement-making ribbon, which speaks at such a high volume.

Longtime actor (and newly-minted Emmy winner) Ann Dowd of The Handmaid's Tale also wore her blue ribbon on her black dress in full plain view for all to see.

The noted Homeland actor was seen with the ribbon, too.

The simple ACLU ribbon ended up being the most eye-catching accessory of the evening. Sorry not sorry to all those sparkling Harry Winston diamonds. After all, remembering and fighting for our civil liberties is always in style. And a touch of blue goes with everything.