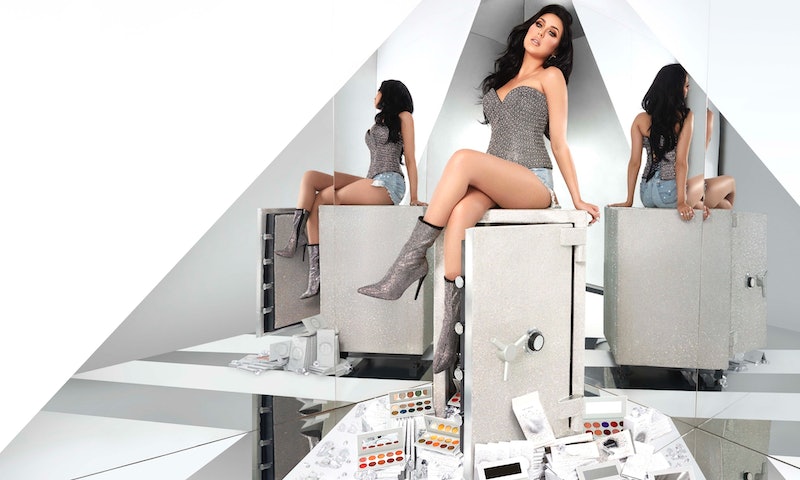 It's on pause... for now. The heavily hyped and much anticipated Jaclyn Hill x Morphe Vault Collection is not coming out on June 26 as planned. Yes, you read correctly.

The Internet's favorite beauty influencer and the indie brand have worked together on so many collabs, namely last year's 35-pan blockbuster eyeshadow palette. Their latest collection is comprised of four palettes with 10 pans of shadow a piece. Each palette has its own color story: purple, yellow, green, and red. These hues were actually created by Hill for the aforementioned Morphe palette but were not used in that edition. Rather than let them sit on the shadow shelf or go to waste, the pair decided to unlock the vault and unleash them on the world in mini palettes. They planned to release the palettes individually for $15 a piece or as a bundle for $49.

A slew of mixed to not-so-positive beauty influencer reviews began popping up on the internet, noting the difficulty blending the formula and inconsistency in the textures. That's when the brand and Hill made the undoubtedly difficult decision to pull the palettes.

The launch is now delayed and the new date is TBA. Bustle reached out to Morphe for further comment.

The brand posted the following note on its Instagram, explaining the reason for hitting the pause button.

Clearly, Morphe and Hill saw the reviews regarding the blendability and realized that some of the colors may not have been up to snuff due to "inconsistent production." They heard the beauty community and decided to halt the release.

Hill posted an Instagram story in which she was visibly upset over the fact that some of the palettes were not up to snuff. She was also incredibly thankful to the influencer community, which received the palettes early for review, who were honest and alerted her to something being "off" with a "bad batch" of product. That way, she and Morphe could go into damage control mode and prevent the subpar versions from making it to consumers.

Hill also stated that anyone who purchased the palette at the Las Vegas in-person event and got a bad one will receive a new, perfectly formulated version.

If you don't think this is an absolutely huge deal, think again! Morphe and Hill have been promoting the Vault series for weeks now. Hillsters were believing the hype and eagerly awaiting the drop. Thousands upon thousands of dollars were spent on the marketing, promotion, and production of these palettes.

It's also a PR hiccup for both Hill and the brand. Fans have faith in both and expect the highest quality products. If the bunk batches went on sale, their individual reputations and credibility would be harmed. While it's a huge hassle and a publicity headache, pulling the palettes was the right thing to do.

Fans were generally supportive of the decision to yank the palettes. Ultimately, the customers would be the most affected if they spent their hard-earned dollars on something that wasn't of utmost quality. So this situation is a case of the beauty influencer community and indie brands working together and showing how much they value their fans.

Check out influencer Jackie Aina's review of the palettes. She was one of the people who pointed out the issues with blending the colors.

It's best to stay tuned both Hill's and Morphe's social feeds for further information on the new release date of the Jaclyn Hill Vault Collection. They are going to need some time to recalibrate and then reboot this launch.