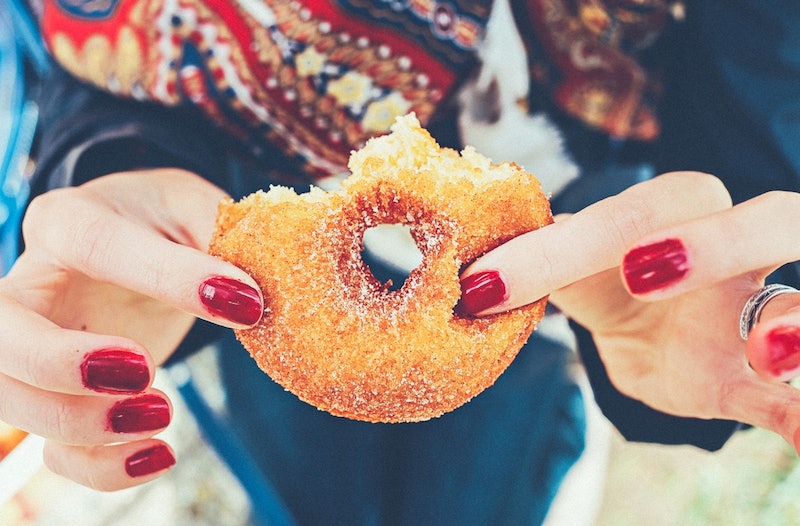 Finding yourself sniffing out sugary snacks when you're physically exhausted is no coincidence. You're more hungry when you're tired because sleep deprivation actually increases your brain's sensitivity to food smells, according to researchers who presented their findings at the Cognitive Neuroscience Society’s annual meeting in San Francisco on Mar. 27.

It turns out that getting less than six hours of sleep each night makes snacking more appealing to you because food actually smells better to your tired brain. The heightened sense of smell applied only to food, according to Science News, and the smell of things like fir trees did not make people want to go for a walk. Bummer.

"When tired, participants showed greater brain activity in two areas involved in olfaction — the piriform cortex and the orbitofrontal cortex — in response to food smells than they did when well rested," coauthor Surabhi Bhutani, of the Northwestern University Feinberg School of Medicine in Chicago, said in Science News. "That spike wasn’t seen in response to nonfood odors."

Another study published in SLEEP, the official journal of the Sleep Research Society, reported that sleep deprivation can produce higher peaks of a lipid in your bloodstream, known as an endocannabinoid system (ECS), that may make eating more pleasurable, which might be why it feels comforting to eat when you're tired.

The ECS is involved in a variety of physiological processes that include appetite, pain sensitivity, mood, and memory. It's also responsible for mediating the psychoactive effects of cannabis. Thus, when you're tired, your ECS may act similarly to your brain after smoking pot — it wants food.

"We found that sleep restriction boosts a signal that may increase the hedonic aspect of food intake," Erin Hanlon, a neuroscientist at the University of Chicago Medical Center, told NPR. In other words, being sleep deprived may produce a stronger desire to eat."

During the study, Hanlon said that participants who slept only four hours a night consumed an average of 400 more calories than their well-rested peers. Additionally, Frank Scheer, a chronobiologist at Harvard Medical School, said the study aligns with rain-imaging studies of sleep-deprived people, according to NPR. "The brain areas involved in reward show increased activity when people [see] images of food."

Another study suggests that just one sleepless night can reduce the brain's ability to make decisions, which increases the chances of making poor food choices. Researchers noticed increased excitement in the brain when sleep-deprived participants were shown pictures of foods like doughnuts, and cheeseburgers (yum).

If you end up in a cycle of eating sugary snacks, which make you feel good in the moment, but inevitably lead to a crash, you could be disrupting your sleep even more. It's similar to drinking alcohol. While you might initially fall asleep, your blood sugar crashes overnight and reduces your melatonin production, causing you to wake up. Rinse and repeat, and you could eventually develop adrenal fatigue, or other health problems.

Body Ecology recommends eating your last meal of the day around or shortly after nightfall, and choosing foods low in sugar and starch.