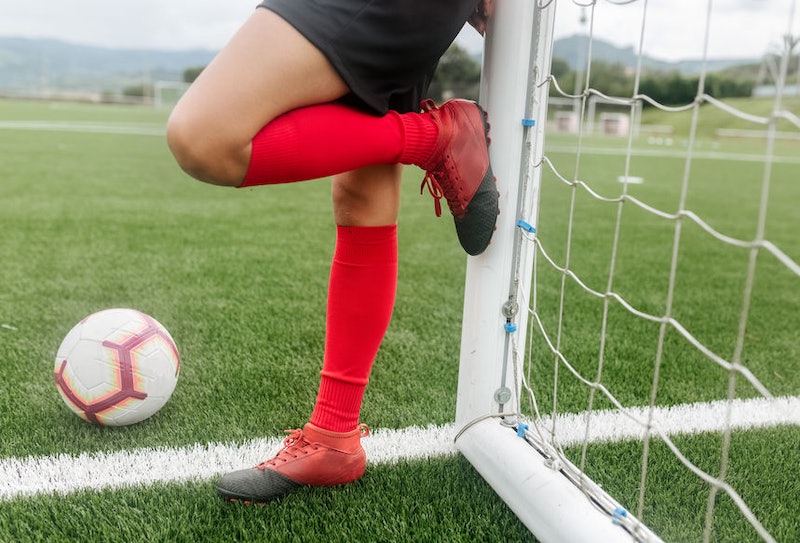 The FIFA Women’s World Cup is approaching, and women’s football has never had a higher profile in the UK. The tournament is being broadcast live on the BBC for the first time ever, and all across the country, football is being played by more and more women and girls.

According statistics presented in the Football Association’s (FA) 'Gameplan For Growth 2017-2020' study, of the estimated 11.8m football players in the UK in the 2016-17 season, more than 2.9m were women and girls. This includes more than 120,000 women and girls who play in affiliated clubs across 5,900 teams.

And those numbers are rising. The FA has pledged to double these figures by 2020, while Baroness Sue Campbell, head of women’s football and the FA, has hinted at “an even more ambitious target” for 2023.

All of this would suggest that the opportunity is ripe for retailers and sportswear designers to cash in on a major new sporting trend. If the FA achieves its 2020 goal, there will be almost six million female footballers playing regularly across the UK. That’s six million kits, six million shin guards, and six million pairs of football boots.

So, why then is it so impossible to buy women’s football boots on the high street?

All you need do is have a quick look at the websites of major sporting outlets in the UK to see just how lacking they are when it comes to providing football boots specifically tailored to women. More often than not, your options are limited to unisex, men’s, or kids.

As hilariously offensive as this is to the millions of female footballers across the UK, it speaks to a deeper issue of exclusion within the sport. Lest we forget, the FA actually banned women from playing football between 1921 and 1971, on the grounds that the game was "quite unsuitable for females."

A lot has been done to improve attitudes towards women’s football, but there is still a strange scarcity when it comes to female-friendly kit

Since 1971, a lot has been done to improve attitudes towards women’s football, but there is still a strange scarcity when it comes to female-friendly kit.

In the absence of women’s football boots, female footballers are forced to choose their boots from the men’s range, or the kids’ selection. But even this is not always doable.

According to the College of Podiatry, the average woman wears a size 6 shoe, while the average man is a size 10. As a result, the majority of men’s football boots are available in a size 8 or above, while most children’s shoes will only go up to a size 5. While there are some men’s and kids shoes available in sizes 5.5-6.5, the selection is very limited. This means that many female footballers end up buying a pair of boots that are either a little bit too big or a little bit too small, putting them at higher risk of injury as they play.

"Out of any sport, in football, it's essential that you get the correct fit, otherwise you can get injuries"

And it should probably go without saying that women’s feet are different to men’s feet, even if they do share a shoe size.

Scientific studies have proven that women’s feet are not just scaled-down versions of men’s feet, but have a number of shape characteristics including the arch, the lateral side of the foot, the big toe, and the heel. A report from Penn State University concluded that “these differences should be taken into account in the design and manufacture of women's sport shoe.”

Andrew Williams, a consultant in podiatric medicine and musculoskeletal scientist who treats some male Premier League players says: “Out of any sport, in football, it's essential that you get the correct fit, otherwise you can get injuries.”

These injuries can range from blisters and frictional rubbing to sprains and biomechanical issues such as shin splints, lower back pain, and plantar fasciitis. Within the podiatry community, a recent spate of cruciate knee ligament injuries has been linked with incorrect footwear and particularly to women wearing men’s shoes.

“When the studs are in the wrong place, it can lead to metatarsalgia or sprains as well as blades that have been implicated in impact injury,” adds Williams. “I have also noticed a particular type of heel pain which is becoming more common especially in young girls participating in football.”

For women and girls who are taking up football for the first time, the wrong choice of boots could have a serious impact on their ability to progress in the sport

For women and girls who are taking up football for the first time, the wrong choice of boots could have a serious impact on their ability to progress in the sport. And with six million women and girls expected to be playing football within the next couple of years, the lack of suitable footwear could become a major issue.

I reached out to four major sporting outlets (Sports Direct, Decathalon, DW Sports, and JD Sports) to see if they wanted to provide a comment for this article, but only JD Sports opted to respond:

“JD Sports has been strengthening its women’s football proposition every day ahead of the FIFA Women’s World Cup, making it easier to shop for women’s football kit and equipment on the site,” said a company spokesperson. “JD Sports’ website has a dedicated page for the Women’s World Cup where visitors can find kit and footwear for both women and girls, while football boots can also be found via the women’s drop down tab on the site.”

However, the shoes promoted via the dedicated page for the Women’s World Cup (the Nike Victory Pack) are from a unisex range, and the same goes for the majority of the women's football boot section.

It’s not impossible to buy women’s football boots in the UK — brands such as Puma and Pantofola d'oro have created shows specifically for the shape and size of women’s feet (with product descriptions stating "the width of the boot is designed to support of a more narrow fit for a woman.") However, with prices starting from £55 (when the shoes are not on discount), this will place them firmly beyond the budget of many amateur players. By contrast, a pair of men’s boots can be picked up for as little as £10 in one of the many high street sales.

If 2019 is the year that women’s football truly enters the mainstream, it should start with a commitment to providing women and girls with access to the same range of kit that men and boys have been able to take for advantage of for decades.