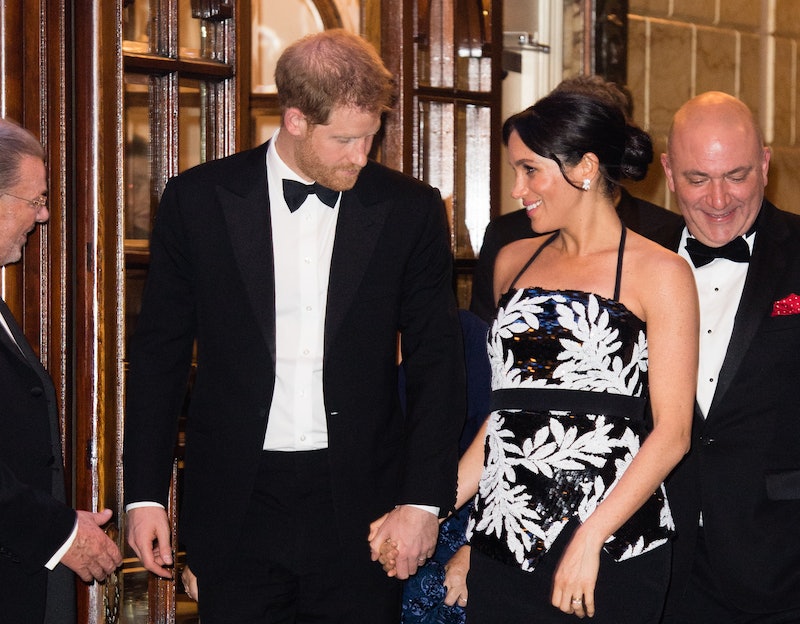 One of the main draws of the Royal Variety Performance is the opportunity to see members of the royal family entertained by a selection of talented UK performers. It's a uniquely special thing to see performers interact with royalty on stage, and this year Prince William and Kate Middleton were entertained by the likes of host Romesh Ranganathan and Rob Beckett. But why weren't Meghan & Harry at the Royal Variety Performance 2019? Granted, they did attend last year, but I was totally ready to see them grace the box for a second time.

Each year, the royal family is represented at the show by various members. There have been periods when the chosen people have appeared more than once in consecutive years — mostly with the Queen and the Duke of Edinburgh — but more often than not the box is graced with different faces every year. And since William, Kate, Harry, and Meghan are some of the most popular royals, it's no surprise that they've been in attendance for the past three years.

And since the Duke and Duchess of Sussex are reportedly on their six-week break for Christmas, according to the Express, it's understandable that they wouldn't be attending the Royal Variety this year. "The Duke and Duchess have a full schedule of engagements and commitments until mid-November, after which they will be taking some much-needed family time," a royal insider told the newspaper. The couple's last royal engagement was for a Remembrance Sunday service on Nov. 10, 2019.

I have reached out to a royal press rep to see whether there is any comment on why Meghan and Harry will not be at The Royal Variety Performance 2019.

As Insider reports, the couple will be spending Christmas with Meghan's family rather than at Sandringham this year. A location hasn't been disclosed (i.e. whether they'll be at Frogmore Cottage or in the States), but a spokesperson for the couple confirmed their plans in early November.

"The Duke and Duchess of Sussex are looking forward to extended family time towards the end of this month," a spokesperson said. "Having spent the last two Christmases at Sandringham, Their Royal Highnesses will spend the holiday this year, as a new family, with the Duchess' mother Doria Ragland." The statement continued:

"This decision is in line with precedent set previously by other members of the Royal Family, and has the support of Her Majesty The Queen."