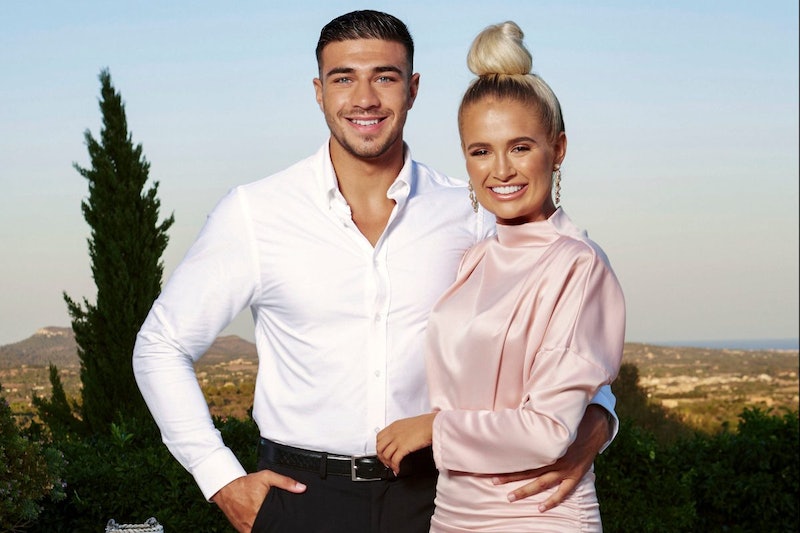 Ah young love. The first blooms of it hit you like a cheap perfume, taking over every part of your being. You find yourself bringing up your new boo in almost every single conversation with friends, not to mention plastering your social media feed with pics of them. I mean, look at the Love Island 2019 contestants. They're all over the gram. Well, except one couple. So why aren't Molly-Mae & Tommy posting on social media? Fans of the hit ITV2 show are a bit baffled by their radio silence, so it's time to get to the bottom of it.

So, yes. Ever since they left the villa, Molly-Mae Hague and Tommy Fury have not posted one single loved-up selfie. Not one "caught-bae-sleeping"-style pic. And guys, I don't just mean photos of each other, I mean any posts from them at all. The posts made during their time in the villa were from their teams who kept things ticking over during their love-in.

Obviously their relative silence compared to their fellow islanders, coupled with the fact that Molly-Mae is usually all over social media (it's her job guys), has led to speculation. Including The Sun saying some fans believe that the pair have already split. However, the newspaper also included a report from "a source close to Molly-Mae," who has confirmed the pair are very much still on.

I reached out to representatives for both Molly-Mae and Tommy to ask for comment on what's going on with their social accounts, and will let you know if and when I hear anything back.

Taking a wee break from social media and the public eye after such an intense period of public scrutiny sounds pretty understandable to me. Especially as Molly-Mae was sadly on the receiving end of a lot of negative comments from news outlets and social media users. Especially in relation to her feelings for Tommy, which were branded fake and insincere by some. A few trolls even insisted she was only in it for the dough and coined the nasty nickname Money-Mae.

The islander spoke to the Mirror about being branded fake and stood up for what she knows is real and basically shut down the haters:

"As to being fake, I know how I feel about Tommy, he knows how I feel about him, the islanders know how we feel, so at the end of the day we made it to the final and through a lot of the votes so if I had been fake we wouldn’t have made it that far at all."

She added that she isn't bothered by all of the negativity and nastiness out there. She got the guy and that's all that matters.

"It doesn't really matter to me as I know how I feel about Tommy. At the end of the day we weren’t in there to win. We came second. It's incredible. It's not a big deal."

Of course, only time will tell whether Tommy and Molly-Mae's love will last, but I know one thing for sure: love and healthy relationships are not quantifiable by Instagram photos.

More like this
Molly-Mae & Tommy Fury Shared The Cutest Gender Reveal Video
By Sophie McEvoy and Sam Ramsden
Ekin-Su & Davide’s ITV Travel Show Finally Has A Name
By El Hunt and Sophie McEvoy
Wait, Is Maya Jama Confirmed To Host 'Love Island'?
By Sophie McEvoy
What Exactly Is The Bish & Chips Show?
By Frances Stewart
Get The Very Best Of Bustle/UK