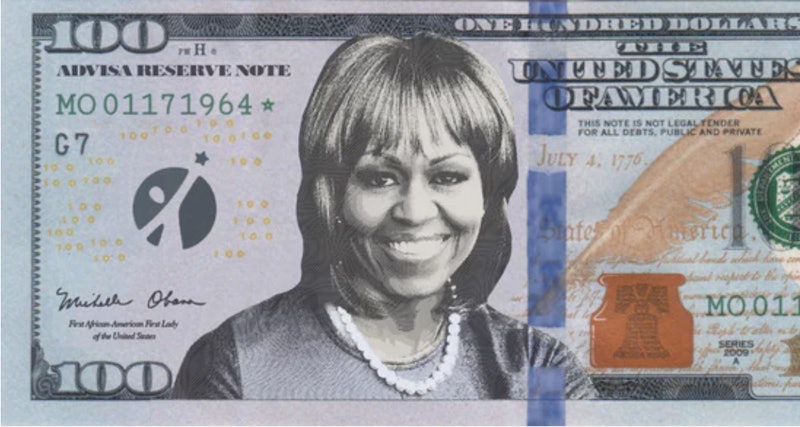 Would you rather have Michelle Obama or Beyoncé on the $100 bill? That's what a Swedish finance company recently asked 2,000 Americans, and the answer might surprise you. Advisa.se conducted a study about money around the world and found that 28 percent of Americans surveyed wanted to see Michelle Obama on American dollars, well surpassing those who are all about Queen B.

After observing that only 52 of the 450 people celebrated on global banknotes are women, the company surveyed 2,000 Americans to ask them about it. According to Advisa.se, only 15 percent of banknotes — across various currencies — featured women, and Queen Elizabeth II accounts for nearly half of those banknotes. The United States is one of 83 regions in the world, along with Russia, China, and India, that don't feature any women on their banknotes at all, the study indicated.

Although 28 percent of Americans surveyed said they would like to see Obama on a dollar bill in the future, her name was not the only one that came up in the survey. One in 10 millennials reportedly mentioned wanting to see Beyoncé featured on American currency, though survey respondents also had the option of saying, "I would not like to see any living American woman depicted on U.S. banknotes."

Tying with Michelle Obama, 28 percent indicated that they wouldn't want to see any living American women featured on banknotes. There was a generational gap in survey responses, too. For example, Advisa.se found that roughly 80 percent of the millennials surveyed reported wanting to see American women being represented on dollar bills, while only about 40 percent of Americans over 55 agreed.

Other popular choices for potential women to be featured on American banknotes included former Supreme Court Justice Sandra Day O'Connor, current Justice Ruth Bader Ginsburg, Oprah Winfrey, and Hillary Clinton. The study also indicated that people were much more likely to want someone on a dollar bill if they were a political leader or royalty.

Efforts to feature a woman on American banknotes are certainly not new. In fact, following an extensive campaign by a grassroots organization called Women on 20s, Harriet Tubman is slated to replace Andrew Jackson on the face of the $20 bill. Additionally, a montage of various American suffragettes is expected to appear on the back of the new $10 bill, which will enter into circulation just in time for the 100th anniversary of the 19th Amendment in 2020. Finally, Eleanor Roosevelt has been selected, among others, to appear on the back of the redesigned $5 bill.

Given that 64 percent of people surveyed by Advisa.se believe that women are underrepresented on American currency, it is more than likely that we will see further efforts to celebrate American women on future banknotes. Will Michelle Obama make it on there? We will see.