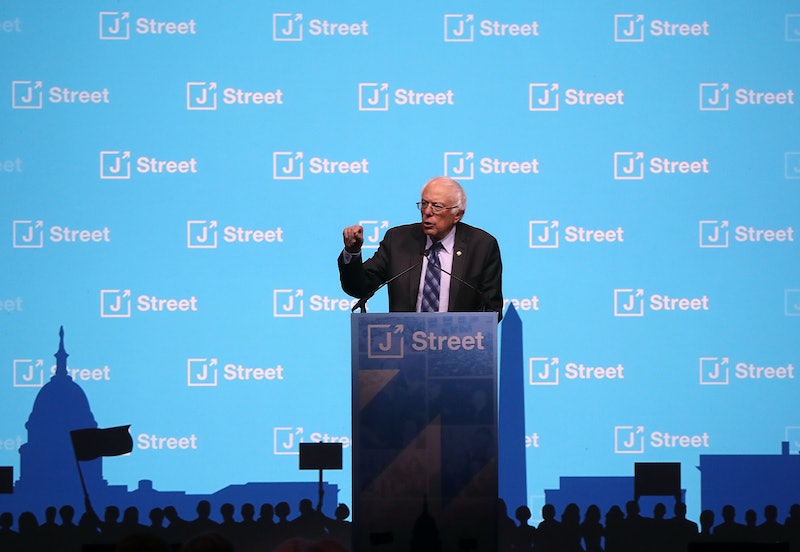 When he was a presidential candidate, Sen. Bernie Sanders' Jewishness wasn't as prominent a point as his workers' rights rhetoric and championing of minorities. At the J Street Conference, however, Sanders proved why he was a keynote speaker for the liberal Jewish group's largest conference ever. He spoke at length about Trump, but it was Sanders' statements about Israel at the J Street Conference that were perfectly suited for the political climate, which concerns Jews and gentiles alike.

In speaking about the Israeli state, Sanders offered as nuanced and positive a take as we've come to expect from the former Democratic candidate for president:

I think it is very important for everyone, but particularly for progressives, to acknowledge the enormous achievement of establishing a democratic homeland for the Jewish people after centuries of displacement and persecution, and particularly after the horror of the Holocaust.

But as you all know, there was another side to the story of Israel’s creation, a more painful side. Like our own country, the founding of Israel involved the displacement of hundreds of thousands of people already living there, the Palestinian people. Over 700,000 people were made refugees. To acknowledge this painful historical fact does not “delegitimize” Israel, any more than acknowledging the Trail of Tears delegitimizes the United States of America.

In this relatively short statement, Sanders captured what so many who hope, pray, and work for peace in the Arab-Israeli conflict have failed to grasp for so long: the importance and legitimacy of the Israel's right to exist paired with a bloody history of conflict with the Palestinians.

While working to delineate where anti-Zionism ends and anti-Semitism begins, this statement has helped me, as an Arab-American who has witnessed the Arab-Israeli conflict firsthand, come to terms with my own beliefs about the region. For so long, the idea that one could condemn Israel's military and political actions against Arabs while supporting the Jewish state's right to existence seemed impossible, and Sanders' statement finally makes it clear that being pro-Palestine doesn't have to attempt to delegitimize Israel.

During his speech, Sanders also addressed the terrifying rise of anti-Semitism and Trump's response to it. Later in his speech, Sanders went even further by characterizing Israel's Palestine policy as a "50-year-long occupation." He then continued the simple but powerful reasoning behind his criticism of Israel's historical and current actions against Arabs:

To hear these powerful words from such a beloved figure among activists warmed my heart in ways that couldn't be achieved by a statement from someone else. Sanders has long been dedicated to fighting for the underdog, but in his J Street speech, he also gave voice to the nuance of this wildly complex issue that might otherwise be lost as Jews, Muslims, and most other minority groups fight to stay safe during Trump's regime.

More like this
6 Organizations Fighting Police Brutality That You Can Support Right Now
By Syeda Khaula Saad and JR Thorpe
Watch Jacinda Arden’s Devastatingly Honest Resignation Speech
By Sam Ramsden
This Is When Netflix Is Going To Start Charging You For Sharing Passwords
By Darshita Goyal
The UK Government Is *Finally* Banning Conversion Therapy
By Sophie McEvoy
Get Even More From Bustle — Sign Up For The Newsletter
From hair trends to relationship advice, our daily newsletter has everything you need to sound like a person who’s on TikTok, even if you aren’t.