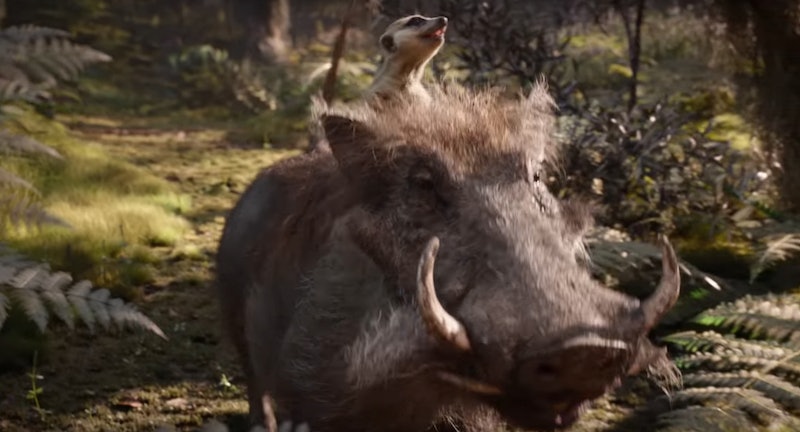 As you may have heard by now, the new Lion King movie is not all that different from the original. The CGI animation is truly impressive (they look like real lions!), but the story is the same (real lions appear to actually die...). But one of the lighter points of The Lion King comes when Timon and Pumbaa first appear on screen. And in the new version — aside from the achievements of the animators, which cannot be overstated — the meerkat and warthog are definitely the highlight.

Timon (Billy Eicher) and Pumbaa (Seth Rogen) first show up after the most distressing part of the movie. Simba watches his father, Mufasa (James Earl Jones), die, and then is told by his uncle, Scar (Chiwetel Ejiofor), that Simba is the reason his dad died, so he should run away forever. Mind you, all of these animals look real, so it looks like an actual little lion cub watch his actual adult lion father fall to his death.

So, when Simba awakes after running away to find a meerkat and warthog duo, it's welcome to not just him, but to everyone watching. Granted, this was the case with the original animated movie, too (they do have the same plot), but the 2019 movie being more static than the original means it needs the lightness even more. The fact that these versions of the characters look like real animals means they also tend to move like real animals and aren't as expressive as the characters in the original. But, while Timon and Pumbaa still look realistic, they have more movement and more personality — something that's lacking elsewhere in the film.

This is thanks in great part to Eichner and Rogen, who play off of each other seamlessly. They actually recorded their parts in the same room, which isn't always the case with voiceover work, but helped massively here. "Our rapport is incredibly naturalistic, and we really play off one another in a way that would have been impossible if we weren’t actually there in the room together," Rogen told Variety. "Weirdly it’s one of the most naturalistic performances I’ve ever given, and I play a warthog."

"It allowed us to really lean into our improv skills," Eichner added. "...We’re overlapping with each other so you can just sense we’re in the room together. It makes all the difference in the world."

It's true. While with the other characters, one lion says a line and then another lion says another, Timon and Pumbaa are conversing in a real way, with all the interruptions and jokes and natural responses that come with that.

Speaking to Entertainment Weekly, the pair also explained that director Jon Favreau had them go through the entire movie in a black-box theater, twice with the script and once without in order get plenty of improv material. According to Eichner, "a shocking amount" of the improvised dialogue stayed in the final cut, and it shows.

The two actors' voices also work well with these characters. Eichner's signature fast-talking that builds up to yelling is hilarious coming out of a tiny meerkat, and Rogen's high energy and excitement in a more innocent character than his usual roles work great, too. Add that to the arc of their "Hakuna Matata" philosophy — which feels heavier in 2019, something Rogen has also pointed out — and touches like the flashback of a cute baby Pumbaa, and these two really steal the show.

The thing is, in a movie called The Lion King, that shouldn't be quite as easy to do. Yes, Timon and Pumbaa were beloved from the original, but so was the movie as a whole. In the new Lion King, everything is the same, and while the animation is beautiful, there are downfalls that come with that. Timon and Pumbaa may have always been your favorites, but if this new movie were more innovative overall, they might not be the best part by such a large margin.