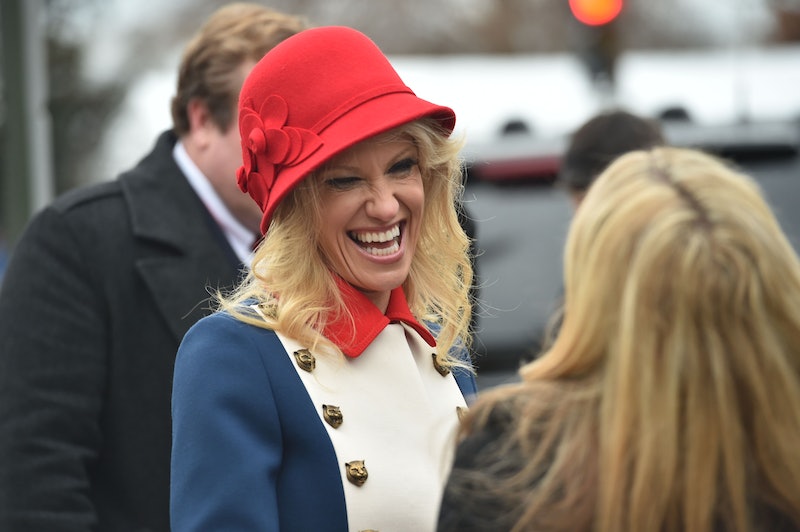 Now, some may say that this is because she looked like Paddington Bear if Paddington Bear were, say, in a Broadway musical about the American Revolution. Others might argue that the backlash was simply because she was joyously ushering in one of the most disliked, politically inexperienced presidents in the American history, has blatantly lied multiple times to the American public, or spends most of her time defending a man who has consistently demeaned women. Take your pick, really. So when Conway responded to the criticism in an interview with The Hollywood Reporter by saying she's "sorry to offend the black-stretch-pants women of America with a little color," I had a few thoughts.

First of all, those "black-stretch-pants" she's talking about — it's unclear whether or not Conway means the stretchy, faux-formal pants from the early 2000s or what most of us boring, everyday peasants like to call leggings. Either way, I'm here to tell her that leggings, yoga pants, black-stretch-pants, spandex trousers, comfort cloths, pajamas — all of them are pretty damn comfortable and incredibly convenient. And, hey, to be fair, comfort probably isn't something that Conway can prioritize (who needs comfort when you have "alternative facts," really?). But convenience... now that's something that I feel like can resonate with everyone. Kind of like the convenience of, I don't know, disregarding the human rights of your own gender and putting your own warped view of "post-feminism" and success before them — but comfier.

See, even as someone who works in fashion, black stretchy pants are the item I have the most of in my closet — well, in my drawers, actually, because you don't have to hang up leggings. Or get them dry-cleaned. Or ever explain to everyone around you why you look like the American Girl Doll version of Betsy Ross. But I digress. The thing is that black stretchy pants are versatile. You can dress them up, dress them down, wear them to spin class, wear them while sitting on the couch and consciously deciding to skip spin class. They're perfect for any occasion.

In fact, Kellyanne Conway and the GOP could learn from my favorite pair of leggings. Black stretchy pants fully respect the intricacies and power of your body. They work with you, and not against you. They are, unlike a $3,600 Gucci coat, attainable for every woman. You can buy black leggings for as low as $10 if you want. The perfect pair would never dare to get all up in your crotch when they definitely, absolutely, positively don't have a right to be there. They don't tell you what to do, but instead empower you to do whatever it is that you want — and they don't care if that's daily spin class or board meetings or anything in between. They know their place, and that's to make your life easier, not to make it harder, or more painful, or restricting. They give you more choices rather than take them away.

And, just for the record, when given the choice between black stretchy pants and almost anything else, I will gladly, enthusiastically choose the pants. I will embrace the Spandex. I will take advantage of the stretch. The important thing — and here is what Conway seems to always, sadly be missing — is my freedom to make a choice.