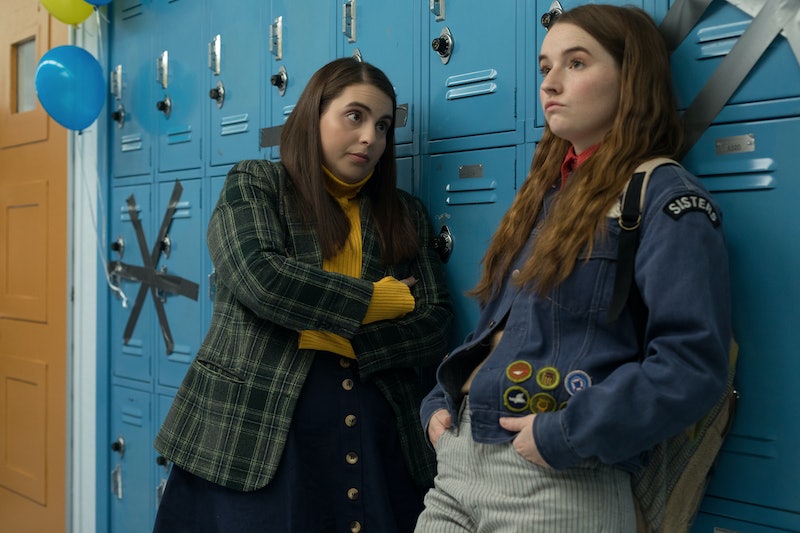 There are a number of sensitive, thoughtful movies that focus on queer teenagers coming out of the closet. Last year's Love, Simon is a charmer; 2011's Pariah, from director Dee Rees, is more dramatic; while Natasha Lyonne's 1999 But I'm a Cheerleader goes full on satire. One of the BFFs at the center of Olivia Wilde's directorial debut Booksmart, in theaters now, isn't straight. But don't expect to see Amy grappling with her identity.

Amy is a graduating high school senior, preparing to be separated from her best friend Molly (Beanie Feldstein), for basically the first time ever. Having focused on their school work for most of the last four years, the two figure that they missed out on all of the partying that usually accompanies high school and decide to attend a huge end-of-year bash the night before graduation. Their quest takes them on a gut-busting journey to multiple parties — some stranger than others — and while the movie is freakishly funny, it also highlights a relatable and loving friendship between two teen girls.

The goal of Amy and Molly's night out is to make up for lost time, but Amy also wants to finally make some headway with her crush, skater girl Ryan (Victoria Rusega). Though the movie explores Amy's romantic and sexual hopes and dreams, Dever says that she's never made into a token.

"In the past, a gay character in movies that I have seen, they're almost put in the movie to make sure that there is a gay character," she says. "And that is something that Olivia never wanted to do."

Instead, we catch up with Amy past the coming out process, and Booksmart can wisely examine the things LGBTQ+ teens face and experience after they've already shared their identity with friends and family. In fact, Amy's parents, played by Lisa Kudrow and Will Arnett, support her 100% — maybe even too much, in Amy's eyes. They're pretty sure that Molly and Amy are more than friends, which Molly is happy to play up.

There's nothing really going on between the pair, but Amy does hook up with another woman during the course of the wild evening.

"We don’t just mention her sexuality, she explores it," Dever says, "And the only love scene in this movie is a queer love scene."

Refreshingly, Amy's encounter and the aftermath is treated with just as much humor and love as any other teen romance, including similar awkward moments and heartbreaking revelations. You'll certainly laugh, but there's realism and heart underneath the funny circumstances.

"In talking to Olivia, I wanted to focus on the range of Amy's arc and storyline and not be afraid to dive deeper into the emotional parts of the movie because that’s what people really connect to," Dever says.

In that way, the portrayal of Amy's identity reflects a main theme of Booksmart, which is that women and girls don't have to be just one thing. Molly and Amy don't want to be known as just the "smart girls." They're also funny, loving, and can have a good time.

"The amazing thing about these two girls is that they sort of discover something about themselves that the other person already possessed," Dever says. "Amy finds her courage, but Molly already had so much courage. Molly discovers how to treat people with a little more compassion, and that's something that Amy possessed."

Those aspects of these characters are more important to the film than who each of them is attracted to, which is why Booksmart is as multi-faceted as Amy and Molly themselves.