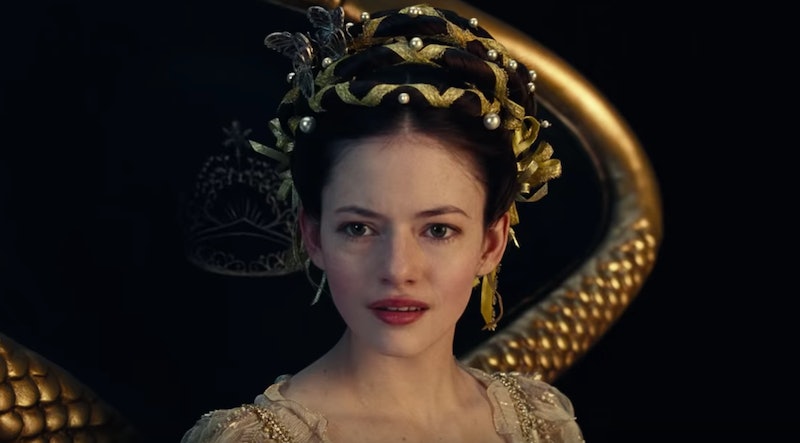 “Just beyond our world, hidden in plain sight, adventure awaits,” Mackenzie Foy, who plays Clara in The Nutcracker and the Four Realms says in a new featurette for the film, which hits theaters on Nov. 2. While you’re probably already familiar with the classic tale of The Nutcracker, whether through the original 1853 book written by E.T.A. Hoffmann or the legendary ballet set to a score composed by Pyotr Ilyich Tchaikovsky, this new movie won’t exactly stick to the classic Christmas tale. Instead, it will take you (and Clara) on a new adventure.

Though the young star of the film is just 17, the way that she carefully chooses her words speaks to a wisdom beyond her years. Perhaps that sort of precociousness comes from playing one of fiction's most iconic young girls, Clara. But Foy wasn't phased when taking on the role for Disney.

In Four Realms, Clara visits a magical world which her mother, an inventor, had ruled as a queen. Since Clara’s mother died, the Four Realms have been threatened by evil spirits and figures like Mother Ginger (Helen Mirren) who want to take over the fictional land. If it sounds like a perfectly enchanting plot, that’s because it is — at least in Foy’s view. The actor says, “I think the film really captures the spirit and the essence of the holiday season. You know when it’s starting to get colder and you just have that happy, magical feeling.”

Get a taste of that feeling in the exclusive featurette below:

But the movie’s not all dances of Sugar Plum fairies and whirling, lacy snowflakes. For Foy, a self-proclaimed “huge Disney fan,” updating Clara to appeal to a 2018 audience allowed the actor to play a more complicated character than you'd perhaps expect.

“In this version, [Clara] is interested in science and mechanics, so she has a technical kind of mind, but she’s also very creative and very imaginative.” Foy says. “It was finding the balance of an artist mind and a science mind and trying to combine them and also figuring out her emotional complexity within this particular story. How she’s affected by her mom’s death, and how she’s trying to be there for her family and how it is really affecting her.”

The idea that Foy gets to present to the world a new version of Clara with such depth and bravery excites the actor. "It’s really cool being able to play a girl who’s interested in mechanics and science and goes into this world and sees that it’s in danger and fights for it," she says. Basically, Clara is the STEM princess that is so needed right now. Foy says she’s eager for people of all ages to see Clara’s show off not just her courage, but also her kindness. And maybe audiences can take away inspiration for themselves too.

“I hope they walk away knowing that they can be like Clara, and like I say, you can be many different things. As long as you believe in yourself and you trust in your heart, you can do anything.”

And while Clara is experiencing this self-discovery in a dazzling, fictional kingdom, Foy can see herself embodying some of the same qualities as the Disney heroine here in the real world. “I’ve always known that if I want something in life, I’m going to have to work hard for it, and I’m going to believe in myself and trust in myself and I’m gonna do the best that I can," she says.