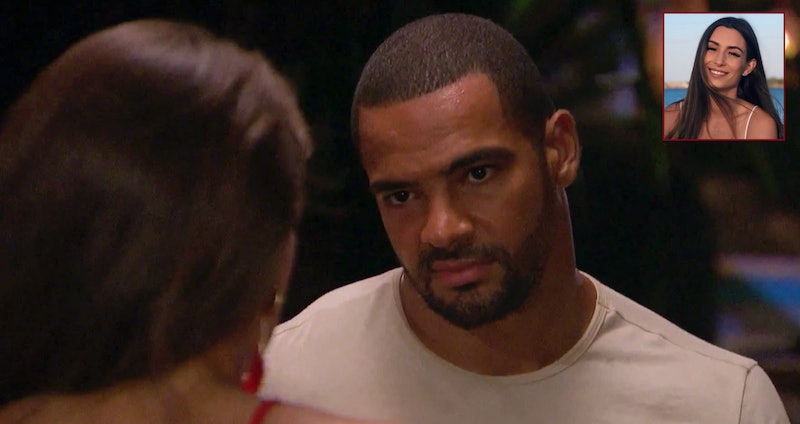 After competing for Nick Viall's heart on Season 21 of The Bachelor, Astrid Loch ultimately found love on Bachelor in Paradise Season 5 with Kevin Wendt. She knows first hand what it's like to weather emotional ups and downs of Paradise, and she's dishing all to Bustle. Read what she has to say about Clay, Angela, and Nicole's love triangle, Kristina's rekindling with Blake, and more in this week's recap.

Quote of the Week:

“I don’t need anyone, I want someone.” -Katie

I’m not sure how I’m going to handle writing this week's recap because… I’M ENGAGED, Y'ALL!!! I’ll of course try to do my best to get to everything but no promises because:

1. My left hand feels heavy so typing is hard.

2. Doing anything other than staring at my hand and Kevin this week feels like a chore.

3. Paradise was kind of a snooze fest this week.

This week picks up with Angela arriving at the beach, leaving both Clay and Nicole worried about how this might affect their relationship. It’s impossible to tell what is going through Clay's mind, but as far as I can tell, he’s not totally over it. And he’s certainly not ready to see Angela go on dates with other people, especially people he has become friends with over the last few weeks. This of course leaves Nicole feeling insecure in her relationship (no matter how many times she tries to say she’s fine) and unfortunately it causes her to lash out about Angela rather than examine her relationship.

Now, unless you’ve been in this environment, where you're sleep deprived, being manipulated by producers, and caught up in the bubble, it’s easy to say that you’d react in a mature and conscious way. But the reality is that Paradise is never normal or easy. Unfortunately, Nicole (fueled by her BFF Tayshia) let the pressure get the best of her and she made some comments about Angela. I don’t think this makes her a bad person, and based on what we’ve seen from her this season, she’s probably cringing at her own behavior a bit.

Somewhere else on the beach, completely fabulous and unbothered, Angela decides to take Mike on a date. Although they shared a kiss, I’m not sure that I’m sold on this connection. If anything her conversation about Clay makes me wonder if she too is actually over their relationship. I do think Angela is absolutely in the right saying that if Clay deserves to be there so does she. Realistically though, it seems to me that they’re both not 100% ready to move on and should probably both have taken some extra time before heading into new relationships.

The rest of Monday night’s episode was a mess that left Haley single and questioning basically all of mankind, JPJ confused about where he stands with Tayshia, and Derek upset yet again as he gets the same breakup lines from another woman… in the same spot. Ultimately Derek decides to leave Paradise with his head held high and once again, we don’t deserve Derek. The true test for Derek will now be resisting the many DMs I’m sure he’s about to receive. #StayStrongDerek

Before I dive into Tuesday's episode, I want to point out to everyone that this is the point in Paradise on my season when everyone started “spiraling,” as we called it, and it appears this cast is no different. This is mostly due to the fact that everyone starts going stir crazy. If you’re in a committed relationship, you’re ready to get out into the real world and new people coming in don’t affect you. If you haven’t made a connection, you start questioning yourself and reaching for anything that might stick. And with that… let’s talk about Kristina and Blake.

If you’ve been following my recaps you know that I’ve been questioning whether Kristina and Blake’s friendship may have been a little more all along and man, do I love saying “I was right.” I absolutely loved Kristina's face when Blake pulled her aside to tell her about his feelings. As a girl, is there anything more satisfying than hearing what you’ve been wanting to hear from a guy you were into? I’m glad Kristina didn’t react immediately and decided to take the night to process this new information… that’s my girl.

My absolute favorite thing from this week (and possibly all season) was Matt Donald and Sydney. I found Matt to be extremely endearing and relatable, because kissing in front of a producer and a whole camera crew is just awkward and uncomfortable, especially the first time, when you know your mom is going to be watching. Sydney stole Demi's crown this week with her straight forwardness when talking to Matt. And that video montage of their kiss honestly deserves and Emmy.

You know who doesn’t deserve and Emmy? Nicole and Tayshia during their re-enactment of Angela at the wedding. I'm sure they were just being playful as friends, but I hated seeing this mean side of them come out, because quite frankly they are two of my favorites this season. Clay also lost me a bit this week. For one, he is definitely not as over Angela as he’d like to admit considering Angela has been minding her own business while Clay has been talking about her nonstop. Secondly, it comes off to me as if Clay wasn’t being completely transparent during their initial breakup, which explains why Angela was as heartbroken as she was.

You know who hasn’t been heartbroken? Caelynn, who moved on with Connor. I’ve been convinced for a long time that men have a radar that goes off whenever a woman moves on and apparently that radar was going off in Dean when he found himself at the Grand Canyon. Dean returns, sans mustache, to ask Caelynn to come home to this van… but will she go for it? We’ll have to find out next week.

Last, but certainly not least, let’s pour one out for Mike. We didn’t get to see enough of him and I hate he didn’t find love. Let’s hope he’s the Bachelor, because otherwise the Wendt household is boycotting the show.

Anyways, gotta go stare at my ring and call my fiancé. Eek. Until next week!