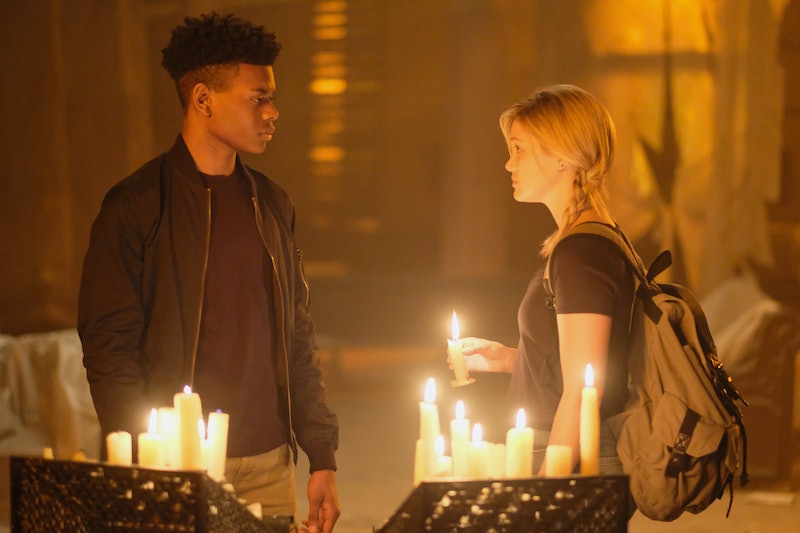 Freeform's Cloak & Dagger, a new Marvel series that premieres June 7, tells a familiar tale in an unfamiliar territory. If you've ever felt like superhero shows were too disconnected from reality for you, or didn't speak to your own life experience, this might be the series for you. In separate interviews with Bustle, Cloak & Dagger themselves, Aubrey Joseph and Olivia Holt — who play Tyrone and Tandy, respectively — talk about their characters' struggles, their journey, and what makes them different from other superheroes on other blocks.

"It's the story of these two people that you would never expect to connect," says Joseph, "so I think it's gonna be great for [young audiences] to see that you can really connect with anyone."

Adapted from Marvel characters who first appeared in Spider-Man comics before getting their own series, the show is about two heroes whose powers bind them. The official Freeform description of the series is as follows:

"Two teenagers from very different backgrounds find themselves burdened and awakened to newly acquired superpowers which are mysteriously linked to one another. The only constant in their lives is danger and each other."

"It's just so authentic," Joseph says about this story. "It's grounded. It's real." Holt also echoes this point. Both call out the fact that female and African American protagonists are still not the norm. According to UCLA's 2018 diversity report for film and television, representation of women and other minorities has grown, but still falls far behind white male leads. The central Cloak & Dagger pair both experience trauma as well at the start of the series, which shapes who they become before the action picks up. "One comes from a broken home," says Holt about her character Tandy, "and one comes from a home where he doesn't feel like he belongs."

"We go through anxiety and finding ourselves and loneliness and things like that," Joseph says, hoping that hits audiences as well. "You're not alone and a lot of us go through it." Tandy's father dies and her life crumbles around that loss. Tyrone witnesses his brother be killed and nobody believes him. He feels alienated from his own family. These sorts of vulnerabilities are important to see on screen — especially when it comes to superhero characters who are held up as role models.

The difference between Cloak and Dagger and their superhero brethren is also evident immediately in the series thanks to the tone set by Gina Prince-Blythewood, who directed the pilot. You may be familiar with her films including Love & Basketball, Beyond the Lights, and The Secret Life of Bees, all known for being character-driven stories. "We all know her for being forward and someone who's very aware of what's going on with the world and definitely tries to push the culture and give us stories to people that aren't heard from," Joseph says.

What else sets Cloak & Dagger apart? "It's sort of focused around a younger superhero team," says Holt. Even with Spider-Man: Homecoming and Runaways on Hulu, this type of story is relatively new ground for the Marvel Cinematic Universe. "You know, we look back on some of the other superheroes that are already out in the world, they already have jobs," Holt says. "Some of them are already in serious committed relationships. Some of them already know how to kick ass at the beginning of developing their powers."

In some ways, theirs is an origin story like any other — but Tandy and Ty don't have Tony Stark's cash flow, Shuri's regal heritage, or Bucky Barnes' military training. Plus, they're navigating adolescence as well as their abilities.

While the original Cloak & Dagger comic take place in New York City, this adaptation sets their coming-of-age in New Orleans. New York has plenty of heroes in the MCU right now, that thing Thanos did in Avengers: Infinity War non-withstanding. "I think [New Orleans is] a pretty epic place to have these two characters grow and continue their journey," says Holt, even going so far as to call the city a character on the show.

"New Orleans is just known for that architecture and the balconies and just being a city full of culture and great music," Joseph says. "It's also a city that has been through so much — but they always fight. They always come back and there's always hope." He's referring to Hurricane Katrina, and his costar also brings up the Deepwater Oil Spill of 2010 when making a similar point.

"That literally speaks to who Tyrone and Tandy are," says Joseph. "Even though the world has sh*tted on them so many times, they don't give up and they still find that reason to live and that light at the end of the tunnel. I think New Orleans was perfect for that."

Holt says that the the people of New Orleans are "continuously bringing so much life and energy and heart into their city," just like Tandy and Tyrone.

One final theme that might strike the casual Marvel fan as a divergence from the norm is the religious imagery and importance of faith on this series. Only Matt Murdock, devout Catholic, has really brought traditional religion into the MCU on Daredevil.

"I think it'll be interesting for people to grasp on to the different relationships that Tyrone and Tandy have with religion and I think that that will speak to a lot of different people," says Holt. Her character, she says struggles with her own beliefs due to survivor's guilt. Still, as Joseph notes and as the pilot reveals, "Tandy lives in the church, and Tyrone goes to private school where he sings in the church choir." Christianity is important to both of them.

There's plenty going on with Cloak & Dagger that will feel refreshing to Marvel fans — and also a lot that should welcome and invite those who haven't connected with the genre in the past. The authenticity, change of setting, and the fact that these characters are somewhat unlikely heroes even in 2018 makes Cloak & Dagger stand out in a crowded field.