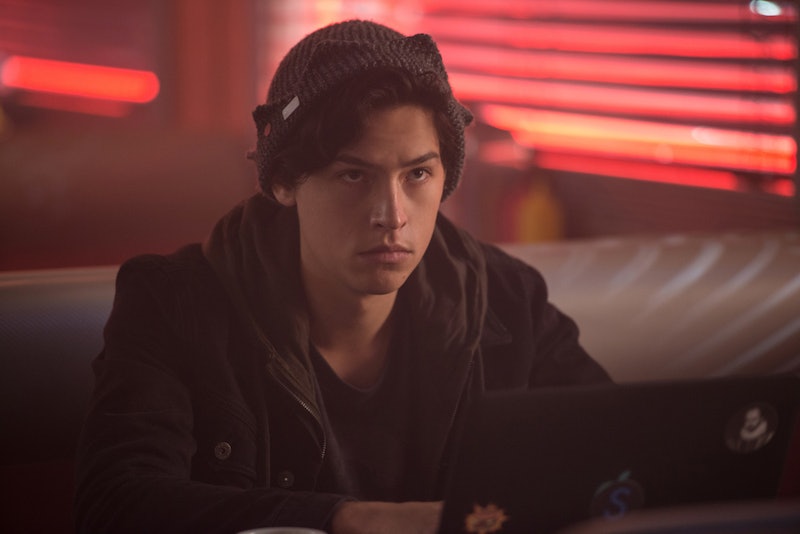 In the six-year interim between The Suite Life of Zack & Cody and Riverdale, it seemed like Cole Sprouse had given up acting for good. After his Disney Channel show ended in 2011, he and his twin brother Dylan seemingly hung up their acting shoes and traded their extraordinary lives for those of ordinary college students. But after graduating from NYU in 2015, Cole Sprouse decided to return to acting on TV and tells Bustle why he made the big leap back to the small screen after so many years away.

"I had taken an intentional break away from acting, because I was going a little insane," Sprouse says. "But then I graduated, I saw my education all the way through, and pilot season had come up." That's when Sprouse read the script for Riverdale, The CW's re-imagination of the classic Archie comic series that currently airs on Thursdays at 9 p.m. Sprouse plays Jughead, who narrates the show and sets the rather dark tone of the murder mystery series. (He still eats burgers, though, don't worry.)

"I read the pilot for Riverdale and really enjoyed it, so when I got the role I decided to fulfill my obligation and see where it would take me," Sprouse says. "It seemed like the right project, because it was interesting and well-written. It was a new character that I haven’t tried before."

This version of Jughead is definitely a departure for Sprouse, who spent six years of his life playing the rule-abiding Cody to his brother's too-cool-for-school Zack. It's clear both from hearing him speak about the role and watching his performance that Jughead is a character he takes very seriously. So much so that he's been openly expressing his desire for the show to keep Jughead asexual like he is in the more recent Chip Zdarsky version of the comics.

Of course, as an actor and as a human, I am all for that kind of representation.

"I believe underrepresented forms of sexuality and romanticism need to be represented in mainstream media, just because it makes our society more accustomed to otherness," Sprouse says, while acknowledging that it's also ultimately not his decision to make. "A lot of these articles have selectively quoted me in a way that makes it seem like I have this kind of control or flexibility over the character that I don’t," he says. "This is a new universe for Archie, so, even if I’m fighting for that kind of representation, it needs to make sense to the universe itself or it’s going to seem out of place. But, of course, as an actor and as a human, I am all for that kind of representation."

Sprouse chooses his words carefully, seemingly determined to say only exactly what he means. It's easy to see why. Growing up in the public eye, everything he said or did faced scrutiny. To this day, fame is something he frequently tries to make sense of. In 2012, he started an Instagram account called camera_duels. The account bio describes itself as being "dedicated to the people out there who secretly take photos of me, and how I take photos of them first. May the fastest camera win." Sprouse's camera won 47 times before he stopped posting about a year ago.

"It became kind of a game," he says of the account, which has almost 750,000 followers. "But, more so, it became a way for me to come to terms with this thing that’s actually quite annoying in a way that was fun." Like many celebrities, Sprouse is no stranger to having his photo taken, but says he prefers when people ask rather than try to sneak a shot, which can be violating to him. "The distance between you as a person and the photographer is a real form of objectification that makes you feel quite a bit like a zoo animal," he says. "If all it takes [is] exercising humanity and asking a single question in order to break down that distance, I think it’s really important."

But, camera_duels isn't the only way Sprouse has tried to grapple with the idea of fame. In 2012, he caused quite a stir when he conducted a social experiment on Tumblr. Sprouse joined the blogging site under the name Coleture Concept and immediately began attracting fan attention. He patiently answered questions, told jokes, posted silly selfies — he appeared to blend right into the tight-knit Tumblr community. He was relatable enough that he seemingly transcended celebrity and became "one of us."

So, when he later revealed that the whole thing was a study in how people would react to being observed, people felt betrayed. He'd seemed like a friend to the site's users, and their trust was shattered. But, reflecting on the experiment, Sprouse stands by his decision to conduct it. He says it wasn't for a class, but for his own curiosity and exploration.

"I don’t want people to be angry, but I think I do want people to reinvestigate perhaps why they were angry. What semblance of trust do they really believe they had?" he asks. "I’ve always had a fear issue with how people are so willing to call a person they have absolutely no firm understanding of their friend or their enemy." Still, he understands why people were upset. "Their anger wasn’t surprising to me, because I think people want to believe they’re having a very real interaction with someone of celebrity or fame or even infamy in a way that makes an impact or makes them feel unique."

But, Sprouse says that false feeling of friendship sometimes had scary real life results. "I had people at college that had been part of the whole experiment thing calling me out in the street, taking it from virtual media to a real world interaction. They would ridicule me on the street and corner me on the street and talk to me about it," he recalls. "There are these interactions that we believe we have in these virtual mediums or with celebrities ... that have almost a real world witch hunting-like set of actions. I think that’s interesting and dangerous and needs to be reinvestigated."

Though he's now back in the spotlight as a star of Riverdale, Sprouse can get out of acting as quickly as he got back in if he feels it's necessary. "The second acting becomes unfulfilling to me, I can leave, and that’s something that helps me stay sane," he says. "I’m not thinking about acting as this sort of long-term journey. If it makes sense and feels right to me, I’ll stay in it or I’ll explore it, but the second it becomes unfulfilling or unenjoyable, I’m just leaving it."

So, enjoy it while you can, because you never know when Sprouse may step away again for a new career — or his next social experiment.

More like this
Harry & Meghan's Body Language Shows They Are “Crazy About Each Other”
By Radhika Menon
Meghan Markle Wishes Learning Royal Protocol Was Like 'The Princess Diaries'
By Jake Viswanath
Harry & Meghan Already Have Another Series Planned After Their Netflix Doc
By Grace Wehniainen
What Does The Royal Family Think Of Netflix's 'Harry & Meghan' Documentary?
By Jake Viswanath
Get Even More From Bustle — Sign Up For The Newsletter